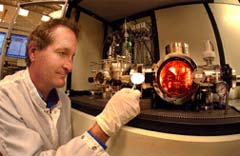 IT ALL STARTS HERE — Andy Allerman is the Sandia scientist who grew the new UV LED materials. (Photo by Randy Montoya) <br>

“Emission wavelengths of 275 to 290 nm with such high power outputs is a major breakthrough in UV LEDs development,” says Bob Biefeld, manager of Sandia’s Chemical Processing Science Department. “Only a handful of research groups around the world have come anywhere close.”

The Sandia team is part of the Defense Advanced Research Projects Agency (DARPA) project SUVOS (for semiconductor ultraviolet optical source), which funds various research groups around the country to develop deep UV compact semiconductor optical sources. (Visible light can be seen in the 400 to 700 nm wavelength range. UV is shorter than about 400 nm. Deep UV is less than around 300 nm.) The SUVOS program has also been developing biological agent detection system prototypes such as UV fluorescence-based LIDAR.

The team reached the 275-290 nm breakthrough a couple of months ago after working on similar research for more than three years – one-and-a-half of those years with DARPA funding.

“When we started the project, one group had been clearly leading the field for several years without any other group making much progress,” says Andy Allerman, the Sandia scientist who leads the growth of the LED semiconductor material. “Our LED performance increased rapidly the past year and recently we reached record power at 290 nm and 275 nm.”

The device has a sapphire substrate with conductive layers of aluminum gallium nitride. It is well known that the more aluminum added to the semiconductor material, the shorter the output wavelength. But with increasing aluminum content the material becomes much harder to grow and harder to flow electrical current through it. The mix that reached the 275 nm is around 50 percent aluminum. A key step in achieving the high powers was getting high-quality material growth at these high aluminum percentages, considered to be very difficult.

Also contributing to the advance is a smart packaging technology that has a flip-chip geometry. Instead of the standard top-emitting LED, the LED die is flipped upside down and bonded onto a thermally conducting submount. The finished LED is a bottom-emitting device that uses a transparent buffer layer and substrate.

Having the device emit light from the bottom serves two purposes, says Kate Bogart who together with Art Fischer developed the advanced packaging at Sandia.

“First, the light is two times brighter when the LEDs are in the flip-chip geometry, primarily because the light is not physically blocked by the opaque metal contacts on the top of the LED,” Bogart says. “In addition, the flip-chip submount pulls heat away from the device because we make it out of materials with high thermal conductivity. This improves efficiency levels with less energy getting converted to heat and more to light.”

The result is a device that is low-weight, small, and resistant to vibrations and shock.

Conventional UV sources are mercury vapor and other types of discharge lamps which are bulky, heavy, and power hungry – completely different from the new LEDs developed at Sandia that are no bigger than one square millimeter.

Biefeld says that another aspect of the device that makes it unique is that the high power output of 1.3 milliwatts at 290 nm is obtained in a continuous wave (CW) mode.

“That was a continuous wave power measurement under direct current (DC) operation, not a pulsed current measurement like other UV LED groups have reported,” Biefeld says. “We were able to control the heat issue to reach these powers in CW mode.”

In October Sandia researchers Mary Crawford and Allerman attended a LED conference in Virginia where Mary gave a presentation on the advances of their devices.

“People were very interested,” Crawford says. “One of our long-term DARPA program goals was to reach 1 milliwatt powers. And now our team has gone beyond that. Everyone was very excited about the power levels.”

While Crawford and Fischer continue to characterize the new UV LEDs and determine exactly how they can be used, LED devices are already being supplied to DARPA program participants making both non-line-of-sight communications and bio-sensor test beds.