Home / Power and Electrical Engineering / The FATRONIK-designed micro-wind generator is up and running
18.11.2003 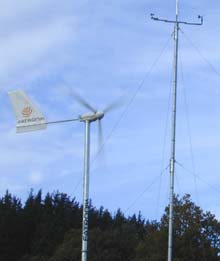 FATRONIK technological centre has designed and installed a micro-wind generator at the Aubixa Euskal Girotze boarding centre (San Pedro neighbourhood, Elgoibar). Since the end of October the 2.5 kW micro-wind generator has been producing energy which is initially planned to power the boarding centre’s four refrigerators, the control room, the data-reception sensors and the PCs. Moreover, four 120 kW photovoltaic plates have been incorporated into the micro-wind generator, thus generating a hybrid system which takes maximum advantage of renewable resources such as the sun and the wind.

The triple-bladed wind generator rotor was designed by the Australian company Bolwell Corporation. Each vane is 2.1m long with an aerodynamic profile chosen for working with low Reynolds values – they have a variable angle of torsion running from the base to the tip. In this way, the angle of attack of the wind with respect to the vane is kept constant all along its length. The rotor is directly coupled to a multipolar electric generator consisting of permanent magnets (PMG) with no intermediate multiplier. The current generated is alternating and with variable voltage and frequency. This current goes to a number of batteries after passing through a voltage regulator which converts the alternating current to direct and eliminates the surplus voltage. Finally, the current is converted into one at 220V with a current inverter, thus adapting the voltage for customary usage.

This hybrid system is designed to work autonomously, i.e. outside the electric grid system. So, this kind of application is of great use in communities distant from cities or towns such as rural areas or zones under development. These systems can be used as a substitute for the grid in areas where the latter system is prohibitively expensive and, moreover, they promote awareness regarding natural resources.

If they are compared to high-powered wind generators, the main difference is in the simple: easy installation and maintenance, minimum aesthetic impact and totally integrable into the environment. Regarding its current use, the main manufacturers and most users of this technology are found in the United States, but things are beginning to move in the Spanish State and in the rest of Europe.

The micro-wind generator has been developed by I. Urrutikoetxea, J.R. Zugadi and I.L. Carrascosa from the team of Renewable Energies.