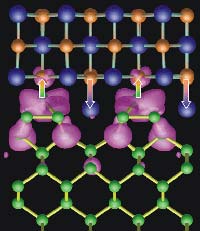 This image illustrates the concept of “Coulomb buffer,” the region between oxide (above) and silicon (below) in nanoswitches, that can be “tuned” through atomic-level manipulation for desirable semiconductor characteristics, an advance that benefits both researchers and manufacturers. <br>

The ability to make atomic-level changes in the functional components of semiconductor switches, demonstrated by a team of Oak Ridge National Laboratory, North Carolina State University and University of Tennessee physicists, could lead to huge changes in the semiconductor industry. The results are reported in the June 13 issue of Science.

Semiconductor devices, the building blocks of computing chips that control everything from coffee makers to Mars landings, depend on microscopic solid-state transistors, tiny electronic on-off switches made of layers of metals, oxides and silicon. These switches stop and start the flow of electrons, and work themselves because of the microscopic interface between the oxide layer and the silicon layer, in the realm of individual atoms, where minute positive and negative charges determine semiconductor success or failure.

Until now, researchers – and the multibillion-dollar semiconductor industries they support – had to accept the limitations that each crucial interface contains.

But researchers at Oak Ridge, NC State and Tennessee have successfully learned to “tune” the atomic-level zone between substances, in a development that they call “a unifying concept for understanding and designing” this aspect of semiconductor physics. According to Dr. Rodney McKee at Oak Ridge, the concept arose from “a reformulation of the classic Schottky Barrier problem that will impact everything in semiconductor technology from laser diodes to field-effect transistors in high-speed logic.”

The atomic tuning, described in the paper “The Interface Phase and the Schottky Barrier for a Crystalline Dielectric on Silicon,” takes place in what Dr. Marco Buongiorno Nardelli, assistant professor of physics at NC State and one of the authors of the paper, has named the “Coulomb buffer.” Here, at the boundary between silicon and oxide, there is an interface phase that is neither silicon nor oxide but its own hybrid structure.

Buongiorno Nardelli, studying this interface phase at the atomic level using high-performance computer simulations, found that the fundamental basis for this tuning was in increasing or decreasing the electronic “dipole charge” – the microscopic arrangement of positive and negative charges at the interface.

The physicists’ sophisticated experiments demonstrated that the Schottky barrier – the boundary at the edge of a substance where electrons are confined, long considered an inflexible limitation – can in fact be manipulated, and that “barrier height” is, in Buongiorno Nardelli’s words, “no longer a problem, but an opportunity.”

According to the NC State physicist, who holds a joint appointment at Oak Ridge National Laboratory, the team’s work will “change common beliefs” in the field of semiconductor physics, and could open the way for smaller, faster and smarter computers.

And manufacturers, able to tune the atomic dipoles in the Coulomb buffer for specific electronic characteristics, may find that this discovery deep in the micro-regions enables macro-steps forward in efficiency and productivity.