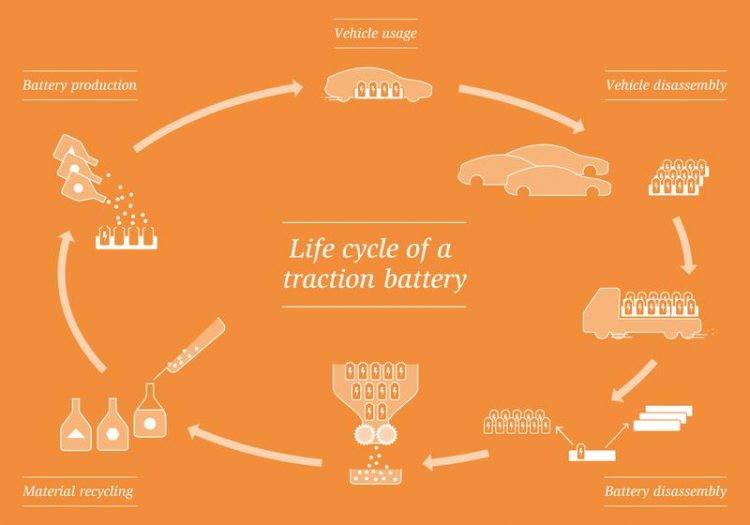 Crunching, the serrated metal roller eats its way into the battery modules, crushes the plastic frames, slits the silver foils of the lithium polymer packs, and shreds everything into pieces. The result is a fine powder. I

f it is successively thrown into several acid baths, salts and oxides are formed, from which new batteries can be built. The YouTube video “Neue Recycling-Methode für Batterien aus Elektroautos”, published in May 2019, shows something that had never been seen so far: the shredding of lithium-ion batteries.

This process seemed impossible, because these batteries are flammable. A little bit of electrical voltage, a single spark is enough, and everything goes up in flames. The German company Duesenfeld, therefore, completely discharges the batteries and fills the airtight shredder with nitrogen. The flammable electrolyte liquid is evaporated and pumped out before the powder is removed. In this way, 96 percent of all materials in the battery can be recycled.

Around 40,000 electric cars and plug-in hybrids with lithium-ion batteries are currently driving on Swiss roads – just under one percent of the entire vehicle fleet. There will soon be more. In the first three months of 2019, the share of new registrations already rose to 5.3 percent. And this is just the beginning – a whole series of high-performance electric cars will be launched on the market this year: Audi e-tron, Mercedes EQC, Peugeot e-208.

These models will meet the Tesla Model 3, which has been leading the registration statistics since March. In 2020, the VW Group will launch its first electric mass-market automobile, the VW iD.3. So it is high time to think about what happens to the batteries when these cars crash or are scrapped at the end of their lives.

A recycling system for car importers

The association “auto-schweiz”, which represents most Swiss car importers, is well aware of this challenge. In 2018, car importers, therefore, turned to Empa to calculate the cornerstones of a recycling system for car batteries. Empa had already advised other industry associations like Swico on the recycling of electronic devices and computer technology.

However, unlike electronic products, no early recycling fee has yet been charged for cars. auto-schweiz is striving for an industry solution and has commissioned the Swiss Auto Recycling Foundation to develop such a solution. Since 1992, this foundation has been responsible for the dismantling and recycling of end-of-life vehicles in Switzerland.

Empa researcher Rolf Widmer and his colleagues from Empa's “Technology and Society” lab have been cooperating with the Auto Recycling Foundation on this project since March 2019. They analyze recycling systems in neighboring countries, examine costs and the ecological footprint and make model calculations in order to estimate the future quantities of old batteries – and, finally, recommend appropriate strategies.

Most lithium-ion batteries are not cold shredded, as with the Duesenfeld method mentioned at the beginning; instead they are burnt in an oven before being ground. Market leader is the Belgian company Umicore. During hot recycling, the thin copper foils of the battery melt and, together with cobalt and nickel, form an alloy that can be recycled. However, the battery's lithium, graphite, liquid electrolyte and aluminum burn and end up in the slag. They are lost for reuse.
In addition to hot Umicore recycling and cold shredding under inert gas, there are other automated dismantling methods. Batrec Industrie AG, a Swiss battery-recycling specialist, shreds some batteries in a wet environment to prevent fires. The Empa experts will compare all these methods.

However, the search for the best recycling system is not only about shredding, but also about building a supply chain. “Traction batteries of vehicles damaged in an accident can burn suddenly and have to be transported as hazardous goods in special containers thus far,” explains Daniel Christen, Managing Director of the Swiss Auto Recycling Foundation. This is costly and time-consuming. Christen is looking for a cheaper solution to “disarm” batteries and deliver them to disposal companies.

There are already approaches around: Blubox Trading AG in Birrwil, for instance, uses the “Firebox” from a Dutch manufacturer. The Firebox is a freight container with a built-in fire extinguishing system that can hold an entire car or a larger charge of “disarmed” batteries.

Last but not least, the forwarding agents and car recyclers must be trained so that decommissioned electric cars do not become hazardous. There is already a database for rescue workers that pro­vides this kind of information: On a tablet, the firefighter enters the number of the license plate and can identify an electric car on the spot. The tablet shows, how he has to disconnect the battery. With the same information, electric cars could also be dismantled safely.

Nevertheless, there are still many open questions that need to be answered before a recycling system can be set up. How will the market for used batteries develop? Will it one day be worthwhile repairing exhausted battery packs with new modules and putting them back on the market – similar to refurbished engines or gearboxes? Will old car batteries rather become stationary solar power storage units in their “second life”? How long will it take for decommissioned batteries to reach the recycling companies? Does Switzerland need large recycling capacities at all, or will car manufacturers abroad collect and recycle most of the batteries themselves?

Much will depend on the market prices of the raw materials, on the value of lithium, cobalt, nickel and graphite, on the price and performance of new batteries, but also on politics, which can set the framework conditions and issue regulations.

In any case, the good news is: Electric cars are not a recycling problem. All steps of the recycling process are technically feasible. And a number of specialists are already working on it