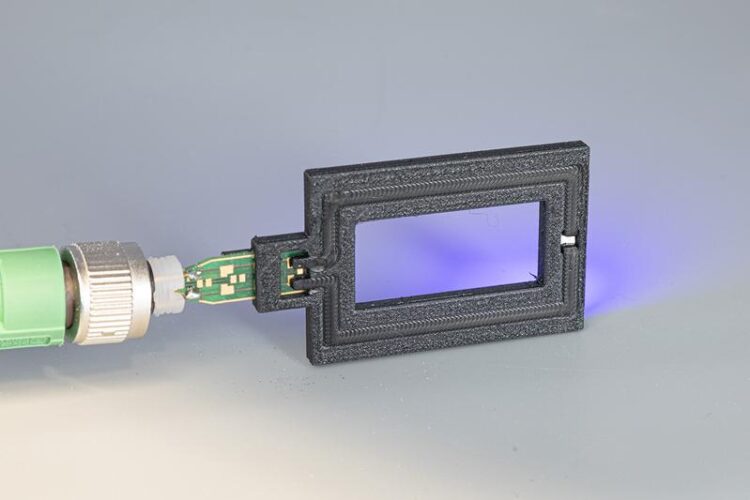 Until now, it has not been possible to additively manufacture sensors and other electronic devices in a single operation.

However, a research team from the Fraunhofer Institute for Manufacturing Engineering and Automation IPA has now succeeded in doing just that. The key to this achievement? Conductive plastics.

In the “Electronic functional integration in additively manufactured components” research project, researchers from the Center for Additive Manufacturing Technologies at Fraunhofer IPA have succeeded in using a 3D printer to produce inductive proximity sensors in any shape, although the printing process had to be repeatedly interrupted in order to lay the conductor tracks in the housing.

Consequently, in the second phase of the project, Stefan Pfeffer’s research team joined forces with plastics processing machinery manufacturer Arburg to investigate which conductive plastics could be used instead of silver or copper. To this end, the researchers experimented with various thermoplastic elastomers (TPE). These are flexible plastics that can be processed when heated. TPEs are conductive if, for example, they contain a sufficient amount of carbon black particles. First, the research team looked for the TPE with the lowest electrical resistance, since the lower the resistance, the greater the number of potential applications there are.

Pfeffer and his team then subjected the selected material to an extensive series of material tests: They exposed it to heat and cold to test how the electrical resistance changed. They passed current through it at increasingly higher voltages until the conductive paths burned through. They stretched the TPE to find out to what point it would return to its original shape and how the conductivity would gradually decrease under tension. They artificially aged the material to see how that affected conductivity and they exposed it to the elements on a flat roof for a year to find out how the TPE weathers and how its properties change during this process.

The research also focused on the question of what settings need to be made on the “freeformer,” Arburg’s industrial additive manufacturing system, to minimize the material’s electrical resistance and to test whether the print orientation (horizontal or vertical) affects the conductivity of the printed components.

Sensors and orthoses are possible fields of application

To serve its purpose, the conductive TPE must be embedded in another thermoplastic with insulating properties during printing. The crux of the matter is that the two plastics need to bond – ideally, it should not be possible to separate them afterwards – but they must not smear during the printing process either. Otherwise, without a clear separation between conductive and insulating materials, there is a real likelihood of triggering a short circuit. Pfeffer’s research team also resolved the question of how electronic components such as LEDs, resistors or microcontrollers can best be installed to enable contact with the printed TPE conductor track.

“Conductor tracks made of carbon black-based TPE are inexpensive to produce,” says Pfeffer, “but they will not be able to replace soldered conductor tracks because of their poorer overall conductivity.” Despite this, there are still a number of interesting areas of application. For example, capacitive sensors such as touch switches or level gauges are potential options, with heating mats or orthoses that release heat at certain points on the body to support healing offering further possibilities. “You could also equip the suction pads of robots with conductor tracks made of TPE in order to monitor wear and tear on the material. The higher the resistance, the more worn the gripper.”