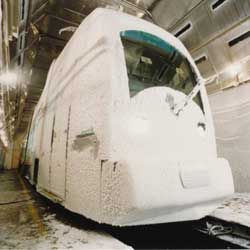 As part of the Ecotram research project in Austria, Siemens is now looking for measures that deliver cost savings without requiring any sacrifices in terms of comfort, as the research magazine “Pictures of the Future” reports.

According to the partners participating in the project, it should be possible to reduce energy consumption for HVAC systems by at least ten percent. The objective is to develop a simulation model for the optimization of a tram’s climate control systems.

Climate and ventilation systems for a modern tram consume around 100,000 kilowatt-hours of electricity per year. There are countless possibilities for cutting costs, in areas ranging from insulation to intelligent control systems. Extreme climatic conditions, for example, occur on only few days in the course of a year, but the systems are designed for such conditions and thus are oversized, which results in excessive weight.

Using carbon dioxide sensors, it would be possible to adjust ventilation to the number of passengers in a tram. Another conceivable measure would be to shut off the heating or air conditioning accordingly before coming to a tram stop or tunnel.

In evaluating these savings ideas, the Ecotram researchers first measure the current power consumption of all the HVAC components. This involved subjecting a test tram to all the weather conditions encountered in a typical year — by means of simulated operation in the climatic lab. The tram is currently in everyday service in Vienna, yielding field measurements to supplement the lab data. The data set should reveal which situations and system components account for the most energy use. Savings measures will then be assessed with regard to efficiency and the effects on passenger comfort.

The measurement data also flows into a simulation software that shows the thermal behavior of a tram on a range of different routes. This will enable Siemens to optimize the climate systems, in terms of efficiency and energy use, for trams and for any operation location. Ecotram was launched in March 2010 and has a duration of 18 months; it is funded by Austria’s Climate and Energy Fund. In addition to Siemens, the project participants include the Vienna University of Technology, Vienna’s Wiener Linien public transport company, the Rail Tec Arsenal climatic testing lab, the climate control system manufacturer Vossloh-Kiepe, and the “Schieneninfrastrukturgesellschaft” (rail infrastructure company). The savings measures identified by the project are to be incorporated in a savings-tram prototype.