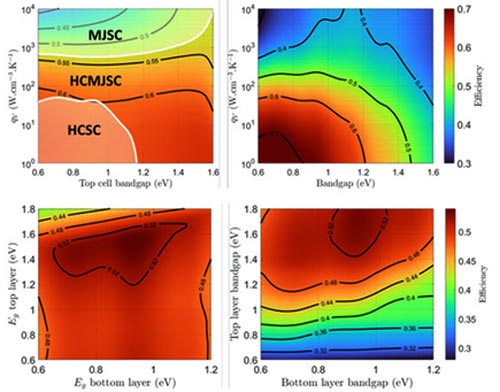 Efficiencies of the MJSC, HCMJSC and HCSC panels as a function of the bandgap and thermalization coefficient. The novel HCMJSC design, investigated by the researchers, shows higher resilience to nonoptimal bandgaps and less constrained thermalization requirements, widening the scope of candidate materials for its design.
Credit: Giteau et al., doi 10.1117/1.JPE.12.032208

Hot-carrier multijunction solar cells maintain a high conversion efficiency with nonoptimal materials, broadening the scope of candidates for their design.

Solar energy is a clean and renewable source of energy. Solar cells usually consist of a semiconductor material that absorbs sunlight and generates electricity. However, the amount of sunlight that can be converted into electricity is limited. Standard single-junction solar cells are theoretically limited to a maximum power conversion efficiency (PCE) of 30 percent. This is the famous “Shockley–Queisser limit,” which comes about from a trade-off between light absorption and charge carrier thermalization.

To overcome this limit and reach higher efficiencies, different designs for solar cells have been considered. For instance, hot-carrier solar cells (HCSCs) make use of the excess kinetic energy of photoexcited electrons (before they are lost as heat) to improve PCE. However, such designs have not managed to exceed the Shockley–Queisser limit in practice. This could be due to their sensitivity to “nonidealities.” Put simply, deviations from ideal scenarios, such as due to imperfect design, nonoptimal materials, or operating conditions, reduces their PCE down to or below the Shockley–Queisser limit. Conversion strategies, therefore, need to consider the resiliency of solar cell designs against such nonidealities.

Against this backdrop, an international team of researchers tested the resilience of a novel solar cell architecture, a hot carrier multijunction solar cell (HCMJSC), to nonideal design with nonoptimal materials. The HCMJSC consisted of a panel with a thin hot carrier top junction series connected to a thick cold bottom junction. They compared its performance with those of the reference standards set by multijunction solar cells (MJSCs) and HCSC. Their results are published in the SPIE Journal of Photonics for Energy (JPE).

As reported in JPE, the researchers evaluated the PCEs using a model that accounted for multiple junctions and hot-carrier effects, implementing a standard absorption model. They calculated how the PCE changed with tuning parameters such as incident intensity, absorber thickness, bandgap, temperature, and thermalization rate (which determines the rate at which the photoelectrons lose their extra kinetic energy).

For optimal designs, the HCSC demonstrated the highest PCE, followed by HCMJSC and MJSC. However, the HCMJSC showed a relatively lower drop in efficiency for nonoptimal designs (materials with nonoptimal bandgaps and finite thermalization rates), thus demonstrating a superior resilience to design imperfections.

In addition, the HCMJSC showed more relaxed requirements on hot carrier thermalization compared to the HCSC. This allowed it to exceed the best MJSC efficiency obtained with available thermalization coefficients. It also widened the range of candidate materials suitable for designing HCMJSCs.

Finally, the researchers tested for resilience against operating conditions to ensure that the resilience against design flaws was not achieved at the expense of increased sensitivity to external conditions. This was done by calculating the yearly averaged efficiencies for nonideal solar illumination (estimated using a standard reference spectrum): all three designs showed a lower average efficiency than their nominal values. While high-bandgap HCMJSCs performed similar to MJSCs, low-bandgap HCMJSCs were slightly more sensitive to illumination effects.

JPE Editor-in-Chief Sean Shaheen (University of Colorado Boulder) remarks, “Hot-carrier photovoltaics have been proposed since the early 1980s as a way to achieve higher efficiencies that break the conventional ‘detailed-balance’ limit, but they have yet to be realized in practice. The work by Giteau and colleagues provides a strategy to bring them closer to fruition by loosening the constraint of near-perfect materials, which otherwise easily reduces the performance of real-world devices.”

Overall, this study provides important insights into what factors affect solar cell performance and the resiliencies relevant for their applications and other technologies in the field, potentially opening doors for better solar cell designs.