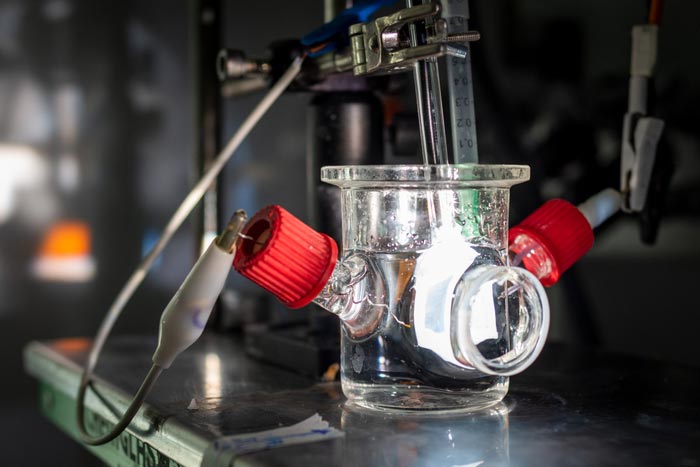 A research team has developed a new artificial photosynthesis device with remarkable stability and longevity as it converts sunlight and carbon dioxide into two promising sources of renewable fuels – ethylene and hydrogen.

The researchers’ findings, which they recently reported in the journal Nature Energy, reveal how the device degrades with use, then demonstrate how to mitigate it. The authors also provide new insight into how electrons and charge carriers called “holes” contribute to degradation in artificial photosynthesis.

“By understanding how materials and devices transform under operation, we can design approaches that are more durable and thus reduce waste,” said senior author Francesca Toma, a staff scientist in the Liquid Sunlight Alliance (LiSA) and Berkeley Lab’s Chemical Sciences Division.

For the current study, Toma and her team designed a model solar fuels device known as a photoelectrochemical (PEC) cell made of copper oxide or cuprous oxide (Cu2O), a promising artificial photosynthesis material.

Cuprous oxide has long puzzled scientists, because the material’s strength – its high reactivity to light – is also its weakness, as light causes the material to break down within just a few minutes of exposure. But despite its instability, cuprous oxide is one of the best candidate materials for artificial photosynthesis because it is relatively affordable and has suitable characteristics for absorbing visible light.

To better understand how to optimize the working conditions for this promising material, Toma and her team took a closer look at cuprous oxide’s crystal structure before and after use.

Electron microscopy experiments at the Molecular Foundry confirmed that cuprous oxide quickly oxidizes or corrodes within minutes of exposure to light and water. In artificial photosynthesis research, researchers have typically used water as the electrolyte in the reduction of carbon dioxide into renewable chemicals or fuels, such as ethylene and hydrogen – but water contains hydroxide ions, which leads to instability.

But another experiment, this time using a technique called ambient pressure X-ray photoelectron spectroscopy (APXPS) at the Advanced Light Source, revealed an unexpected clue: cuprous oxide corrodes even faster in water containing hydroxide ions, which are negatively charged ions comprised of an oxygen atom bound to a hydrogen atom.

“We knew it was unstable – but we were surprised to learn just how unstable it really is,” said Toma. “When we began this study, we wondered, maybe the key to a better solar fuels device isn’t in the material by itself but in the overall environment of the reaction, including the electrolye.”

“This demonstrates that hydroxides contribute to corrosion. On the other hand, we reasoned that if you eliminate the source of corrosion, you eliminate corrosion,” explained first author Guiji Liu, a LiSA project scientist in Berkeley Lab’s Chemical Sciences Division.

In artificial photosynthesis, this recombination can corrode cuprous oxide if it is not properly controlled. Scientists had long assumed that electrons were solely to blame for cuprous oxide’s corrosion. But to Toma’s and Liu’s surprise, computer simulations performed at the National Energy Research Scientific Computing Center (NERSC) showed that holes also play a part. “Before our study, most people assumed light-induced degradation in cuprous oxide was mainly caused by electrons, not holes,” Liu said.

The simulations also hinted at a potential workaround to cuprous oxide’s inherent instability: a cuprous oxide PEC coated with silver on top, and gold/iron oxide underneath. This “Z scheme,” which is inspired by the electron transfer that takes place in natural photosynthesis, should create a “funnel” that sends holes from cuprous oxide to the gold/iron oxide “sink.” Moreover, the diversity in materials at the interface should stabilize the system by providing additional electrons to recombine with the holes of the cuprous oxide, explained Toma.

To validate their simulations, the researchers designed a physical model of a Z-scheme artificial photosynthesis device at Toma’s LiSA lab at Berkeley Lab. To their delight, the device produced ethylene and hydrogen with unprecedented selectivity – and for more than 24 hours. “This is a thrilling result.” said Toma.

“We hope that our work encourages people to design strategies that adapt to the intrinsic features of semiconducting materials in artificial photosynthesis devices,” added Liu.

The researchers plan to continue their work on developing new solar fuel devices for liquid fuels production by using their new approach. “Understanding how materials transform while they are functioning in an artificial photosynthesis device can enable preventive repair and prolonged activity,” concluded Toma.

This work was supported by the DOE Office of Science.