Home / Power and Electrical Engineering / Milestone study of excitation of electrons in GaAs at the attosecond level
04.04.2018 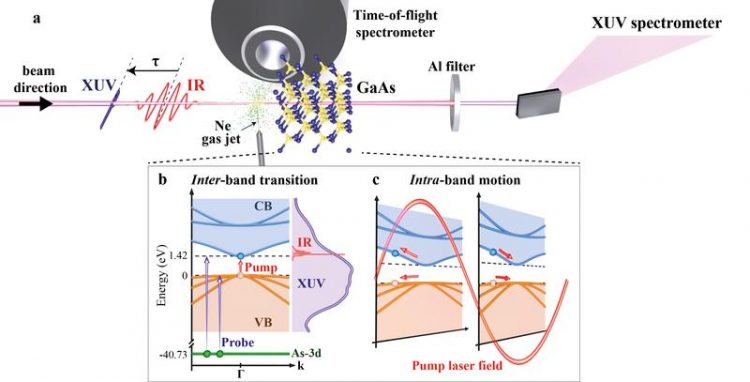 Fabian Schlaepfer and his colleagues in the experimental group of Ursula Keller at the ETH Institute for Quantum Electronics, together with Angel Rubio and Shunsuke Sato from the MPSD’s Theory department, combined transient absorption spectroscopy with sophisticated first-principles calculations to study and understand these processes. Their work has now appeared online in Nature Physics.

Gallium arsenide is a technologically important narrow-band-gap semiconductor, in which the excitation of electrons from the valence into the conduction band produces charge carriers that can transport electrical current through electronics components.

Which of the two mechanisms dominates the response to a short intense laser pulse, and how their interplay effects the carrier injection into the conduction band, is far from obvious.

Their work has also now revealed that the nonlinear interplay between intra- and interband transitions opens a new excitation channel via virtually excited states at high pump intensities.

These results represent an important step forward in understanding the light-induced electron dynamics in a semiconductor on the attosecond timescale. The processes will be of practical relevance for future electronics and optoelectronics devices, whose dimensions become ever smaller and involve ever faster dynamics and ever stronger electric fields.