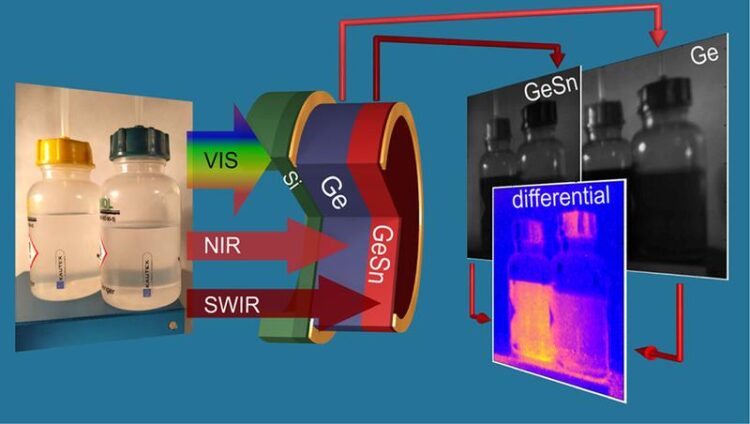 The liquids isopropanol and toluene appear transparent to the naked eye. In the NIR and SWIR range different portions are absorbed, which in combination enables a precise determination to be made.
Credit: Simola et al., ACS Photonics 2021, 8, 7, 2166-2173 (CC BY-NC-ND 4.0)

Jülich researchers, together with Italian and German colleagues, have developed a particularly cost-effective infrared detector that can be easily integrated into existing camera chips and smartphones. The new sensor can make two technically important ranges of infrared radiation visible, which previously were not covered by conventional photodiodes. The findings were published in the journal ACS Photonics.

The world looks much clearer in shortwave infrared, or SWIR: Cameras operating in this range of the spectrum produce images in greyscale that are usually extremely sharp. This is because such photo chips can simply see through rain, fog, or haze. Visible light, on the other hand, is scattered by the small water droplets in the air. This creates a veil in the image, which limits the visibility and detail recognition. However, this effect does not play a role when it comes to light in the SWIR range. Therefore, such cameras are well suited for applications that require a clear view, for example for aviation security or autonomous vehicles.

However, conventional camera chips made of silicon can only image the SWIR range to a very limited extent. “There are already other cameras that are used for these purposes. However, their very high cost prohibits their use in daily-life application” says Dr. Dan Buca from Forschungszentrum Jülich. The use of materials that are difficult to combine with the standard circuits made of silicon makes their integration in a chip complex and thus expensive.

“Our detector bridges a gap, since it covers a range of the spectrum for which there have been no cost-effective sensors to date. The smart combination of elements and alloys that are well compatible with silicon now enables us to use a straightforward manufacturing process with standard industry tools. Therefore, we are now able to construct very inexpensive camera chips that can be integrated in any smartphone just as in visible cameras currently in use,” Buca adds.

A thin layer of silicon, the standard material for computer chips, serves as the basis for the new detector. Further layers of semiconductor materials containing the elements germanium and germanium-tin are deposited on top, all of which are in the same main group of the periodic table as silicon.

“The germanium–tin semiconductors were developed at Jülich,” says Prof. Giovanni Isella from Politecnico di Milano university (Italy), who led the development of the component together with Dan Buca. “It took almost 10 years to optimize all the material parameters and device designs for this. But now these semiconductor layers can be built in any chip factory using the established technology.” This makes it possible to produce them in a cost-effective way. Because they are based on silicon, they can also be integrated on existing chips without major difficulties.

Moreover, these different semiconductor layers can be used to produce individual pixels on photo chips for digital cameras, and each pixel is capable of capturing the same image in different infrared ranges of the spectrum. This makes some objects appear – quite literally – in a different light. “In the case of paintings, for example, we can use the Ge-GeSn pixel to look through layers of paint and see how the artist compose the painted or what is underneath,” says Isella. Certain inks used as security features for banknotes appear to disappear when viewed under IR light. The authenticity of the banknotes can therefore be easily checked using the Jülich detector.

A special feature of the detector is that it is receptive to two different ranges of the infrared spectrum. For this purpose, only the bias voltage applied to the detector must be reversed. Then, the component switches from near infrared (NIR) to short-wave infrared (SWIR). “In doing so, we’re expanding the sensor’s area of application,” says Isella.

In this way, it is possible to distinguish between substances based on their different absorption properties in the NIR and SWIR range. This was demonstrated by the team using the solvents isopropanol and toluene. Thanks to the switchable detector, the liquids that are colourless to the human eye can be clearly distinguished. This is not only used in the chemistry laboratory but also for real-life applications.

The results reported on ACS Photonics are only the initial step to exploit the full application potential of the NIR/SWIR dual band detector. The contributing research teams are continuing their collaboration towards the realization of a commercial product.