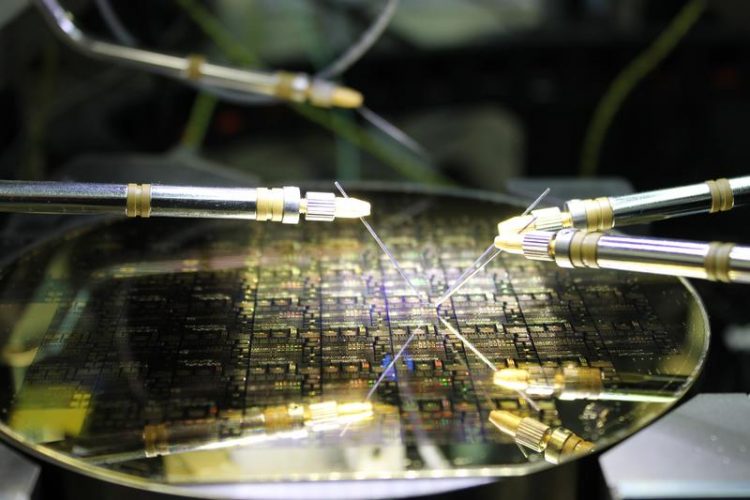 The scientists made an IC from a monolayer of a semiconducting polymer. Copyright: MPI for Polymer Research

“The idea is that all components of a transistor come together and arrange themselves in a hierarchical order”, said Kamal Asadi, leader of the Humboldt research group at the MPI for Polymer Research. The monolayer is highly ordered and is able to conduct electric charge carriers well. The research team has used solution of a polymer. By dipping the transistor substrate in the solution in a controlled manner, the researchers could grow and produce a complete polymeric monolayer.

To achieve their scientific breakthrough, the scientists have intentionally dissolved the semiconducting polymer in an organic solvent that could not fully dissolve the polymer. In this way, the scientists have made the first self-assembled monolayer polymer field-effect transistor (PoM-FET). Nevertheless, one PoM-FET does not make a functional integrated circuit.

Therefore, the research team has integrated hundreds of PoM-FETs and has operated them at the same time to demonstrate a 15-bit code generator, an integrated circuit that converts a voltage into a digital code. The landmark scientific result has applications in flexible electronics and fast response sensors.

About the Max Planck Institute for Polymer Research

The Max Planck Institute for Polymer Research (MPI-P) ranks among the globally leading research centers in the field of polymer research since its foundation in 1984. The focus on soft materials and macromolecular materials has resulted in the worldwide unique position of the MPI-P and its research focus. Fundamental polymers research on both production and characterization as well as analysis of physical and chemical properties are conducted by scientific collaborators from all over the world. Presently over 500 people are working at the MPI-P, the vast majority of whom are engaged in scientific research.