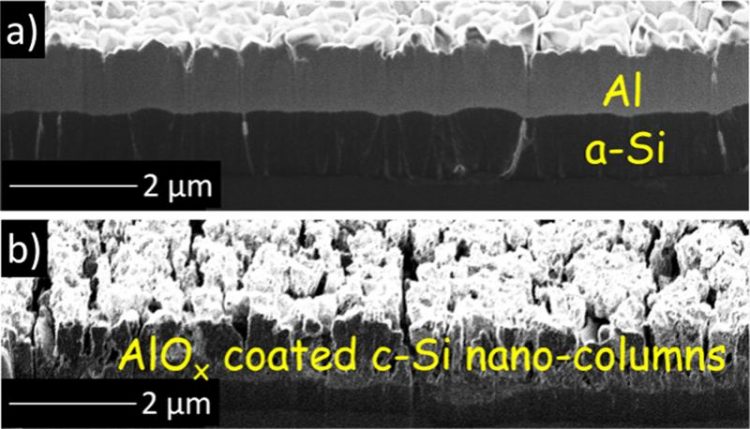 In the past, great progress has been made in electric mobility. What's still missing is an efficient, small, stable electrical energy storage unit. Previously either lithium-ion or metal-hydride rechargeable batteries were used in electromobiles. The latter are less effective than the lithium-ion batteries, but much cheaper.

For mobile applications, a small and lightweight energy storage unit with a high charging capacity is required. Predestined for this are lithium-ion rechargeable batteries with a silicon anode. Most lithium-ion rechargeable batteries in the past have had graphite anodes, while the silicon anode offers a much larger charge capacity, but it has a big disadvantage: when charging and discharging, its volume extends and shrinks by up to 270%. This leads to mechanical strain that destroys the anode after only a few charging cycles.

Scientists at the University of Stuttgart have now developed two new processes for using silicon with a tailored structure in this area. Both groups are working on manufacturing a porous silicon anode and stabilizing it in order to achieve great charge cycle stability.

At the Institute for Photovoltaics (IPV) of the University of Stuttgart, Prof. Dr. Jürgen H. Werner and his team have succeeded in manufacturing porous and thus micro-stabilized silicon anodes. This micro-stabilization can be accomplished in a simple process step with local laser irradiation.

The semiconductor layers are deposited onto a metal film in a vacuum process — for example PECVD or sputtering. If necessary, several layers are processed one after another to increase the material thickness. The initially compact layer generated this way is broken up by local laser irradiation, which finally results in a micro-stabilized porous silicon layer.

In addition, doped areas can be created in the silicon layer by local laser irradiation. Especially p-doped areas on a n-doped semiconductor layer function as reinforcement areas since they store fewer lithium ions than the n-doped areas. This prevents swelling and increases the mechanical stability of the anode.

The laser processed film is then metalized and contacted. With this process, a battery with a large share of active material and a high energy density can be manufactured easily and cost-effectively.

The second process was developed by the Institute for Material Sciences at the University of Stuttgart (Prof. Dr. Guido Schmitz, and formerly Prof. Dr. Horst Strunk); To solve the problem of the mechanical loading of a silicon anode on a Li-ion rechargeable battery, the scientists developed nano-architechtured silicon films that demonstrates great mechanical resilience even in case of several hundred charge cycles. These silicon anodes can be produced in a continuous process.

To achieve this special structure, the bulk silicon layer was coated on an electrically-conductive substrate, e.g. a metal film or a conductive polymer film, . Then, another layer that contains aluminum is applied. After an optimized heat treatment a partial interdiffusion takes place in this bilayer system. The semiconductor transits, at least partially, to the crystalline state.

In the final step, parts of the metal coating on the surface are removed using a wet chemical process. Moreover a conformal aluminum-oxide functional layer forms spontaneously on the nanostructured porous silicon layer, which provides the anode material in a Li-ion rechargeable battery with great stability.

Initial experiments with the laboratory model of a Li-ion rechargeable battery have already shown that the capacity without further optimizations remained stable even after 500 charge cycles at approx. 1650mAh/g; this is more than four times the normal value for today's lithium-ion rechargeable batteries with graphite anodes.

The patents for these inventions were registered in Europe and the USA and are pending. Technologie-Lizenz-Büro (TLB) GmbH supports the University of Stuttgart in patenting and marketing its innovations. Acting on behalf of the University, TLB is in charge of the commercial implementation of these future-orientated technologies on a global level and offers companies opportunities for cooperation and licensing.
For further information, please contact: Dr.-Ing. Hubert Siller (siller@tlb.de).

Disinfection robot: Value created by linking up to building data