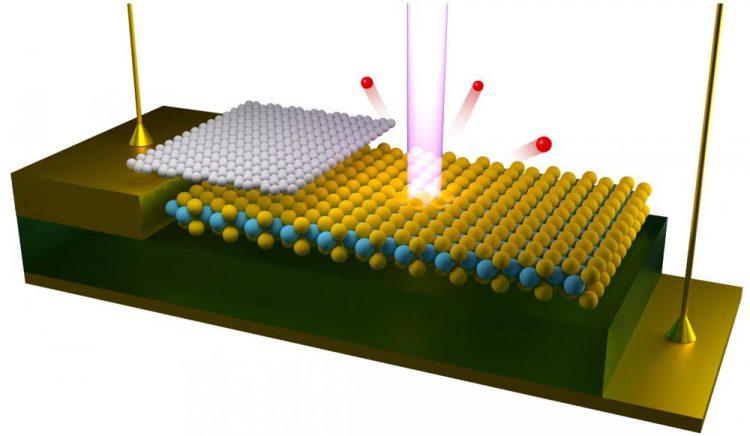 Electrons ejected by a beam of light focused on a two-dimensional semiconductor device are collected and analyzed to determine how the electronic structure in the material changes as a voltage is applied between the electrodes. Credit: Nelson Yeung/Nick Hine/Paul Nguyen/David Cobden

Physicists from the University of Warwick and the University of Washington have developed a technique to measure the energy and momentum of electrons in operating microelectronic devices made of atomically thin, so-called two-dimensional, materials.

Using this information, they can create visual representations of the electrical and optical properties of the materials to guide engineers in maximising their potential in electronic components.

The experimentally-led study is published in Nature today (17 July) and could also help pave the way for the two dimensional semiconductors that are likely to play a role in the next generation of electronics, in applications such as photovoltaics, mobile devices and quantum computers.

These changes in electronic structure in operating devices are what underpin all of modern electronics. Until now, however, there has been no way to directly see these changes to help us understand how they affect the behaviour of electrons.

Dr Neil Wilson from the University of Warwick's Department of Physics said: “How the electronic structure changes with voltage is what determines how a transistor in your computer or television works. For the first time we are directly visualising those changes. Not being able to see how that changes with voltages was a big missing link. This work is at the fundamental level and is a big step in understanding materials and the science behind them.

“The new insight into the materials has helped us to understand the band gaps of these semiconductors, which is the most important parameter that affects their behaviour, from what wavelength of light they emit, to how they switch current in a transistor.”

The technique uses angle resolved photoemission spectroscopy (ARPES) to 'excite' electrons in the chosen material. By focusing a beam of ultra-violet or x-ray light on atoms in a localised area, the excited electrons are knocked out of their atoms. Scientists can then measure the energy and direction of travel of the electrons, from which they can work out the energy and momentum they had within the material (using the laws of the conservation of energy and momentum). That determines the electronic structure of the material, which can then be compared against theoretical predictions based on state-of-the-art electronic structure calculations performed in this case by the research group of co-author Dr Nicholas Hine.

The team first tested the technique using graphene before applying it to two dimensional transition metal dichalcogenide (TMD) semiconductors. The measurements were taken at the Spectromicroscopy beamline at the ELETTRA synchrotron in Italy, in collaboration with Dr Alexei Barinov and his group there.

Dr David Cobden, professor in the Department of Physics at the University of Washington, said: “It used to be that the only way to learn about what the electrons are doing in an operating semiconductor device was to compare its current-voltage characteristics with complicated models. Now, thanks to recent advances which allow the ARPES technique to be applied to tiny spots, combined with the advent of two-dimensional materials where the electronic action can be right on the very surface, we can directly measure the electronic spectrum in detail and see how it changes in real time. This changes the game.”

Dr Xiaodong Xu, from the Department of Physics and the Department of Materials Science & Engineering at the University of Washington, said: “This powerful spectroscopy technique will open new opportunities to study fundamental phenomena, such as visualisation of electrically tunable topological phase transition and doping effects on correlated electronic phases, which are otherwise challenging.”

The research was supported by the Engineering and Physical Sciences Research Council, part of UK Research and Innovation, and the U.S. Department of Energy and the National Science Foundation.

Caption and credit: Electrons ejected by a beam of light focused on a two-dimensional semiconductor device are collected and analyzed to determine how the electronic structure in the material changes as a voltage is applied between the electrodes. Credit: Nelson Yeung/Nick Hine/Paul Nguyen/David Cobden

For interviews or a copy of the paper contact: