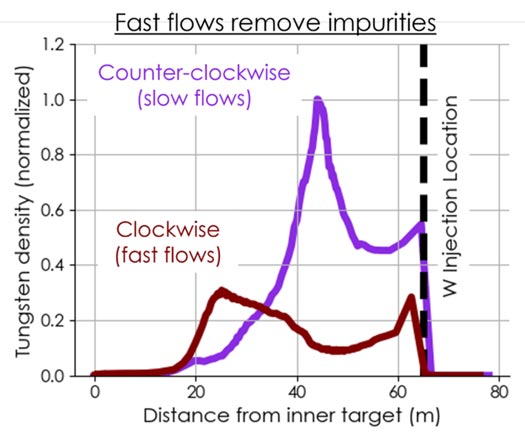 Impurities in the plasmas in fusion tokamaks can reduce performance. These impurities are created by interactions between the hot plasma and the metal tokamak walls. These walls are often armored with tungsten. This material resists heat, but degrades over time, releasing impurities into the plasma. Simulations predict how these impurities behave, but they are difficult to measure directly because many impurities only emit weak levels of radiation. The experiment detailed here used a collector probe to sample the plasma. It determined that detrimental impurities accumulate in the region just outside the plasma edge only when the tokamak magnetic fields rotate around the donut-shaped tokamak in a counter-clockwise direction. This is the opposite direction that the plasma current moves. Clockwise rotation causes fast flows that remove the impurities.

Fusion power plants need plasmas that can maintain fusion conditions for long periods of time. Impurities in the plasma degrade performance. This means fusion science and technology researchers need to develop ways to control the transport of impurities through the plasma and remove them when they occur. This is important for practical fusion energy. Until now, there have been no experimental measurements of impurity accumulation in the important space between the tokamak’s metal wall and the edge of the plasma. This new research result suggests approaches that future power plants can use to prevent this accumulation.

Researchers at the DIII-D National Fusion Facility, in partnership with the University of Tennessee, deployed a diagnostic called a collector probe to measure tungsten content in the edge of plasmas. They used the state-of-the-art edge simulation codes DIVIMP and 3DLIM to model impurity transport in the plasma edge. Simulations showed that in order to reproduce the experimental collector probe measurements, an accumulation must have occurred during the experiments. However, this accumulation only occurred when the tokamak’s magnetic field moved counter-clockwise. When the magnetic field moved clockwise, very fast plasma flows likely remove impurities and prevent their accumulation by transporting and depositing them on the vessel walls. These results appear to be the first indirect measurement of edge impurity accumulation ever made.

This material is based upon work supported by the Department of Energy (DOE) Office of Science, Office of Fusion Energy Sciences, using the DIII-D National Fusion Facility, a DOE Office of Science user facility.

Ultrathin solar cells get a boost