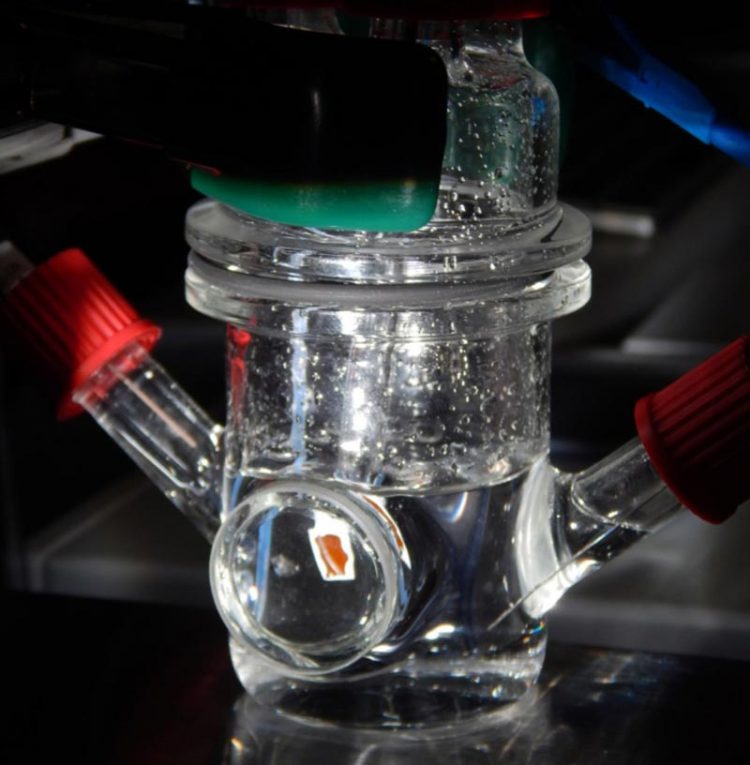 The new study explores the subtle interplay of the primary components of such devices and outlines a theoretical framework for understanding the underlying fuel-forming reactions. The results suggest strategies for improving the efficiency and performance of such hybrid technologies, bringing them a step closer to commercial viability.

The production of hydrogen and reduced forms of carbon by these technologies could one day supplant fossil fuel sources for a broad range of reduced carbon commodities, including fuels, plastics and building materials.

“In this particular work we've been developing systems that integrate light capture and conversion technologies with chemical-based energy storage strategies,” says Moore, who is an assistant professor in ASU's School of Molecular Sciences.

Rather than direct generation of electricity from sunlight, this new breed of technology uses solar energy to drive chemical reactions capable of producing fuels, which store the sun's energy in chemical bonds. “That's where catalysis becomes extremely important. It's the chemistry of controlling both the selectivity of reactions and the overall energy requirements for driving those transformations,” Moore says.

Something new under the sun

One of the most attractive sources for sustainable, carbon-neutral energy production is both ancient and abundant: sunlight. Indeed, adoption of solar energy technologies has gained significant momentum in recent years.

“But just having access to solar power using photovoltaics is not enough,” Moore notes. Many renewables like sunlight and wind power are not always available, so storage of intermittent sources is a key part of any future technology to meet global human energy demands on a large scale.

As Moore explains, borrowing a page from Nature's handbook may help researchers harness the sun's radiant energy to generate sustainable fuels. “One thing is clear,” Moore says. “We are likely to continue using fuels as part of our energy infrastructure for the foreseeable future, especially for applications involving ground and air transportation. That's where the bioinspired part of our research becomes particularly relevant–looking to Nature for hints as to how we might develop new technologies for producing fuels that are carbon free or neutral.”

One of Nature's more impressive tricks involves the use of sunlight to produce energy-rich chemicals, a process mastered billions of years ago by plants and other photosynthetic organisms. “In this process, light is absorbed, and the energy is used to drive a series of complex biochemical transformations that ultimately produce the foods we eat and, over long geological time scales, the fuels that run our modern society,” Moore says.

In the current study, the group analyzed key variables governing the efficiency of chemical reactions used to produce fuel through various artificial devices. “In this paper, we've developed a kinetic model to describe the interplay between light absorption at the semiconductor surface, charge migration within the semiconductor, charge transfer to our catalyst layer and then the chemical catalysis step,” said Wadsworth.

The model the group developed is based on a similar framework governing enzyme behavior, known as Michaelis-Menten kinetics, which describes the relationship between enzymatic reaction rates and the medium in which the reaction takes place (or substrate). Here, this model is applied to technological devices combining light-harvesting semiconductors and catalytic materials for fuel formation.

“We describe the fuel-forming activities of these hybrid materials as a function of light intensity and also the potential,” Wadsworth says. (Similar Michaelis-Menten-type kinetic models have proven useful in analyzing such phenomena as antigen-antibody binding, DNA-DNA hybridization, and protein-protein interaction.)

In modeling the dynamics of the system, the group made a surprising discovery. “In this particular system we are not limited by how fast the catalyst can drive the chemical reaction,” Moore says. “We're limited by the ability to deliver electrons to that catalyst and activate it. That is related to the light intensity striking the surface. Brian, Anna, Diana, and Edgar have shown in their experiments that increasing the light intensity increases the rate of fuel formation.”

The discovery has implications for the future design of such devices with an eye toward maximizing their efficiencies. “Simply adding more catalyst to the surface of the hybrid material does not result in greater rates of fuel production. We need to consider the light absorbing properties of the underpinning semiconductor, which in turn forces us think more about the selection of the catalyst and how the catalyst interfaces with the light absorbing component.”

Much work remains to be done before such solar-to-fuels solutions are ready for prime time. Making technologies like these practical for human demands requires efficiency, affordability and stability. “Biological assemblies have the ability to self-repair and reproduce; technological assemblies have been limited in this aspect. It's one area where we can learn more from biology,” Moore says.

The task could hardly be more urgent. Global demand for energy is projected to swell from around 17 terawatts today to a staggering 30 terawatts by mid-century. In addition to significant scientific and technological hurdles, Moore stresses that profound policy changes will also be essential. “There's a real question of how we're going to meet our future energy demands. If we're going to do it in an environmentally conscious and egalitarian manner, it's going to take a serious political commitment.”

The new research is a step on the long pathway to a sustainable future. The group notes that their findings are important because they are likely relevant to a wide range of chemical transformations involving light-absorbing materials and catalysts. “The key principles, particularly the interplay between illumination intensity, light absorption and catalysis should apply to other materials as well,” Moore says.

Financial support for this work was provided in the form an Early Career Award, via the National Science Foundation. The CAREER award is the National Science Foundation's most prestigious and competitive honor for early-career investigators, supporting junior faculty who exemplify the role of teacher-scholars through research, education and the integration of education and research within the context of the mission of their organizations.