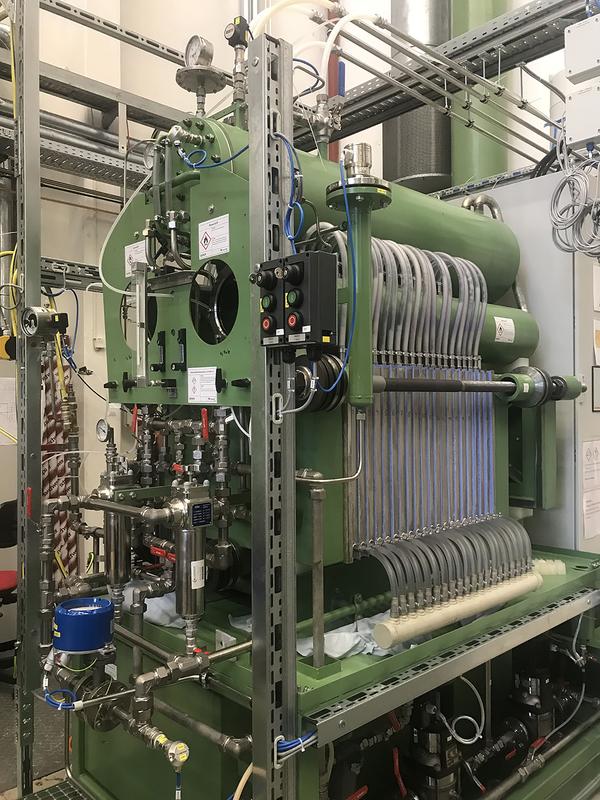 The Fraunhofer Institute for Manufacturing Technology and Advanced Materials IFAM in Dresden is part of the initiative “HySpeedInnovation”, which brings together a number of leading organisations in research and technology (RTOs) that offer pro-posals to speed up the development of water electrolysis as a green energy technology.

Green hydrogen produced by electrolysis using renewable sources such as the sun and the wind plays a crucial role in the energy transition. But much remains to be done to produce this clean energy carrier on an industrial scale and at an acceptable cost. Eu-rope has good trump cards to achieve this.

At the initiative of the Dutch organization TNO, the position paper ‘HySpeedInnova-tion’ has been launched in which a number of leading European research and technol-ogy organisations describe the upscaling challenges that lie ahead and how the institu-tions can come together to tackle these challenges in order to make Europe a leader in
the field of electrolysis. Besides Fraunhofer IFAM and TNO, Fraunhofer ISE and Forschungszentrum Jülich from Germany, the Norwegian SINTEF as well as France’s CEA take part in this initiative.

The RTOs also recommend a supporting role for the European Commission and na-tional authorities. Meanwhile, other knowledge institutions from EU Member States have also embraced the call, as has the network Hydrogen Europe Research which represents several hundred companies and organisations in the field of hydrogen.

An enormous challenge lies ahead in upscaling currently available technologies to GW-scale factories, which is required to drive forward the energy transition. For Europe, this challenge is reflected in the European Green Deal, which puts renewable hydrogen produced by electrolysis high on the political agenda. The European Hydrogen Strategy sets a target for 6 GW installed electrolyser capacity by 2024, and 2×40 GW by 2030 (40 GW in Europe and 40 GW in neighbouring countries) producing respectively 1 and 10 million tons of hydrogen annually. Tens of billions of euros are promised as a stimu-lus for this development. Several hydrogen strategies from European member states also have quantified targets for electrolysers according to their National Hydrogen Strategies looking at the 2030 horizon: e.g. 6.5 GW in France, 5 GW in Germany,
3-4 GW in the Netherlands, 1 GW in Portugal and 4 GW in Spain.

In the position paper, the researchers describe the advantages and disadvantages of the main technologies on which current electrolysers are based and where improve-ments are needed. This involves a good balance between cost, performance and sus-tainability. For example, serious alternatives have to be found for the scarce raw mate-rials and rare metals currently used in electrolysers. The production method, still largely manual, can and must also become much more efficient and cheaper.

The most important obstacle to overcome is not so much technical: the chain of man-ufacturers, their suppliers and the knowledge institutions themselves is fragmented across Europe, thus slowing down the innovations needed to develop a new genera-tion of electrolysers. There is also a lack of sufficient demand for green hydrogen, partly because the costs are still too high. This makes the business case for large-scale application dependent on government incentives.

To support and accelerate the required developments, the European RTOs propose to work together more intensively and in a more coordinated way. For this purpose, three sets of opportunities have been identified. These opportunities are: (i) connecting hydrogen labs; (ii) setting clear performance standards; and (iii) monitoring perfor-mance of subsidized pilots. For each opportunity, actions have been identified that fall within the responsibilities of Europe’s RTOs.

To achieve these objectives, European RTOs call for support from national govern-ments and EU policy makers on the following topics:
– An EU funded program aimed at facilitating the establishment of a coordinat-ed EU infrastructure enabling the use and sharing of water electrolysis testing facilities. The goal is to support (new) industries and to facilitate easier access to the production chain.

– The implementation of an Open Access policy for sharing aggregated data and learnings. Governments should make sharing of data and learnings of all subsidised research, demonstration and deployment projects mandatory.

However, for each opportunity, some requirements will have to be met that lie outside of direct RTO influence. It is here that the responsibility of policy makers on the na-tional and EU levels is required to facilitate the proposed effort.