Home / Power and Electrical Engineering / Energy of the future: photosynthetic hydrogen from bacteria
05.05.2020

Energy of the future: photosynthetic hydrogen from bacteria 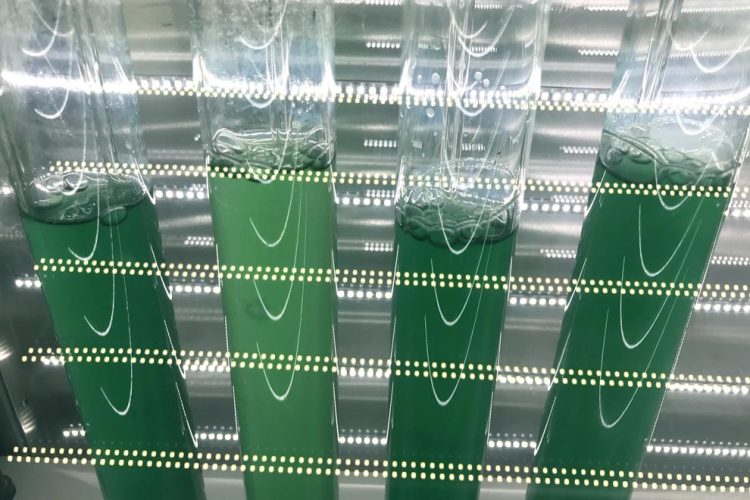 In contrast to in vitro approaches, the metabolism of living cyanobacteria is in principle capable of producing hydrogen permanently. © Dr Kirstin Gutekunst

The transition from fossil fuels to a renewable energy supply is one of the most important global challenges of the 21st century. In order to achieve the internationally-agreed target of limiting global warming to a maximum of 1.5 degrees, the international community must drastically reduce global CO2 emissions.

Although Germany was long considered a pioneer in this energy transition, a wide-ranging switch to renewable energies in the energy sector still remains a future scenario here. In this regard, hydrogen could play an important role in the future as a promising, potentially climate-neutral energy source.

Used in fuel cells, it provides energy for various applications, and only produces water as a waste product. At the moment, hydrogen is primarily obtained from the electrolysis of water – and this process initially requires energy input, which has so far mostly come from fossil fuels.

A climate-neutral hydrogen economy, i.e. the use of so-called green hydrogen, requires that hydrogen production is based exclusively on renewable energy. Researchers are trying to exploit such a sustainable energy source, for example by means of photosynthesis. Ever since, photosynthesis has provided mankind with energy from sunlight, either in the form of food or as fossil fuels.

At Kiel University, associated to Professor Rüdiger Schulz, the junior research group ‚Bioenergetics in Photoautotrophs’ at the Botanical Institute, led by Dr Kirstin Gutekunst, investigates how this carbon cycle – and the resulting CO2 emissions – can be avoided during energy conservation.

“For this purpose, the storage of solar energy directly in the form of hydrogen is particularly promising – this creates no CO2 and the efficiency is very high due to the direct conversion,” says Gutekunst to explain her research approach. With her team, she investigates a specific cyanobacterium: via photosynthesis, it can produce solar hydrogen for a few minutes, which is however subsequently consumed completely by the cell.

In their current study, the Kiel researchers describe how this mechanism could be used potentially for biotechnological applications in future: they were able to couple a specific enzyme of the living cyanobacteria, a so-called hydrogenase, with the photosynthesis in such a way that the bacterium produces solar hydrogen for long periods of time, and does not consume it. The scientists published their findings today in the renowned scientific journal Nature Energy.

Just like all green plants, cyanobacteria are able to perform photosynthesis. During this process, solar energy is used to split water and to store the solar energy chemically – especially in form of sugar. Electrons pass through so-called photosystems in which they undergo a cascade of reactions that ultimately produce the universal energy carrier adenosine triphosphate (ATP) and so-called reducing equivalents (NADPH). ATP and NADPH are subsequently required for CO2 fixation to produce sugar. Thus, the electrons needed for the production of hydrogen are normally part of metabolic processes which provide the cyanobacteria with stored energy in the form of sugar. The Kiel research team has developed an approach to redirect these electrons and stimulate the metabolism of the living organisms to primarily produce hydrogen.

“The cyanobacterium we investigate uses an enzyme, a so-called hydrogenase, to produce the hydrogen from protons and electrons,” says Gutekunst, who is also a member of the Kiel Plant Center (KPC) research network at Kiel University. “The electrons used in this process come from photosynthesis. We succeeded in fusing the hydrogenase with the so-called photosystem I in such a way that the electrons are primarily used for the production of hydrogen, while the normal metabolism continues to lesser extents,” continues Gutekunst. In this way, the modified cyanobacterium produces significantly more solar hydrogen than in previous experiments.

Ability to repair itself

Concepts for the energy of the future

Overall, the new in vivo approach offers a promising new perspective for establishing photosynthetic water splitting as a means of production for climate-neutral, green hydrogen, and thus advancing the generation of sustainable energy. In the medium term, further research on the metabolic pathways of cyanobacteria in Gutekunst’s group is particularly focussed on further increasing the efficiency of solar hydrogen production. “The research results of our colleague are an excellent example of how fundamental research on plants and microorganisms can contribute to solving social challenges,” emphasises KPC spokesperson Professor Eva Stukenbrock. “We are thus making an important contribution in Kiel towards developing a sustainable hydrogen economy as a viable alternative for a secure energy supply of the future,” continues Stukenbrock.

https://www.uni-kiel.de/de/pressemitteilungen/2020/113-gutekunst-natureenergy-tu…
Caption: In contrast to in vitro approaches, the metabolism of living cyanobacteria is in principle capable of producing hydrogen permanently.
© Dr Kirstin Gutekunst