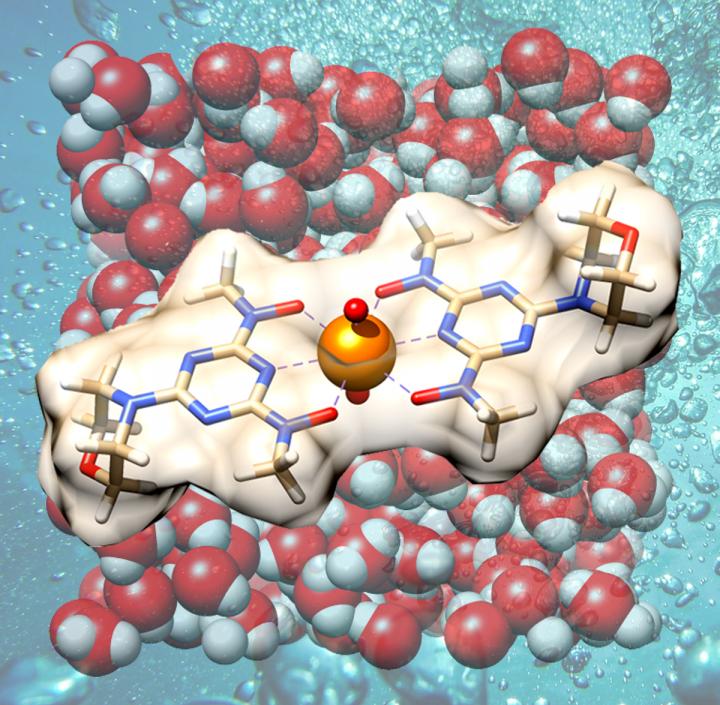 A research team from the Department of Energy's Oak Ridge and Lawrence Berkeley National Laboratories, the University of California, Berkeley, and the University of South Florida developed a material that selectively binds dissolved uranium with a low-cost polymer adsorbent.

The results, published in Nature Communications, could help push past bottlenecks in the cost and efficiency of extracting uranium resources from oceans for sustainable energy production.

“Our approach is a significant leap forward,” said coauthor Ilja Popovs of ORNL's Chemical Sciences Division. “Our material is tailor-made for selecting uranium over other metals present in seawater and can easily be recycled for reuse, making it much more practical and efficient than previously developed adsorbents.”

Popovs took inspiration from the chemistry of iron-hungry microorganisms. Microbes such as bacteria and fungi secret natural compounds known as “siderophores” to siphon essential nutrients like iron from their hosts. “We essentially created an artificial siderophore to improve the way materials select and bind uranium,” he said.

The team used computational and experimental methods to develop a novel functional group known as “H2BHT”–2,6-bis[hydroxy(methyl)amino]-4-morpholino-1,3,5-triazine–that preferentially selects uranyl ions, or water-soluble uranium, over competing metal ions from other elements in seawater, such as vanadium.

The fundamental discovery is backed by the promising performance of a proof-of-principle H2BHT polymer adsorbent. Uranyl ions are readily “adsorbed,” or bonded to the surface of the material's fibers because of the unique chemistry of H2BHT. The prototype stands out among other synthetic materials for increasing the storage space for uranium, yielding a highly selective and recyclable material that recovers uranium more efficiently than previous methods.

With a practical recovery method, saltwater extraction offers a sustainable alternative to land-mining uranium that could sustain nuclear power production for millennia.

Uranium deposits are abundant and replenishable in seawater through the natural erosion of ore-containing rocks and soil. Despite dilute concentrations, approximately 3 milligrams of uranium per ton of seawater, the world's oceans hold massive stores of the element totaling an estimated four billion tons–a 1000 times greater supply than all land sources combined.

The development of efficient uranium adsorbents to harness this potential resource, however, has been an elusive quest since the 1960s.

“The goal is to develop efficient adsorbent materials at a low cost that can be processed using mild conditions to recover uranium, and also reused for multiple extraction cycles,” said ORNL's Alexander Ivanov, who performed computational studies of H2BHT.

Supported by the DOE Office of Nuclear Energy's Fuel Cycle Research and Development program, the team has focused on determining the underlying factors that influence selectivity and increase the volume of recoverable uranium with new materials.

Previous studies on amidoxime-based compounds revealed a fundamentally stronger attraction to vanadium over uranium that may be difficult to overcome. The development of H2BHT offers an alternative approach, using non-amidoxime materials, to better target uranium in mixed-metal water environments.

Selectivity has long been a stumbling block on the road to more efficient adsorbent materials. Early advances, driven by trial and error, found amidoxime-based functional groups effectively bind uranium in water but do an even better job of recovering vanadium, although the latter has a comparatively lower concentration in seawater.

“The result is that amidoxime-based materials, the current front-runners for commercially available adsorbents, fill up more quickly with vanadium than uranium, which is difficult and costly to remove,” said Popovs.

“To work as a scaled-up concept, ideally, unwanted elements would not be adsorbed or could easily be stripped during processing and the material reused for several cycles to maximize the amount of uranium collected,” said Popovs.

The next step, say researchers, is to refine the approach for greater efficiency and commercial-scale opportunities. The journal article is published as “Siderophore-Inspired Chelator Hijacks Uranium from Aqueous Medium.”

UT-Battelle manages ORNL for the DOE Office of Science. The single largest supporter of basic research in the physical sciences in the United States, the Office of Science is working to address some of the most pressing challenges of our time.