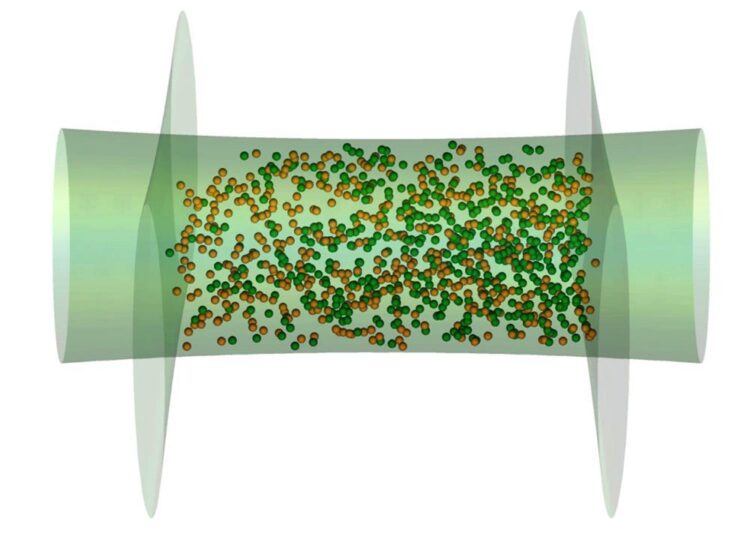 The image depicts the optical box trap, made of green laser light shaped into a tube and two light sheets, with the partially condensed gas held inside. The superfluid component, mainly consisting of the condensate, is represented as coloured in green and is oscillating to the side, decoupled from the normal component coloured orange.
Image Credit: Lena Hannah Dogra

You heard it here first, and then again.

If you could immerse yourself in a quantum fluid, you would hear every event twice, because they support two sound waves with different speeds.

The researchers in their experiment have realized this remarkable property for the first time in a three-dimensional quantum gas, instead of a quantum liquid. They achieved this result through cooling a gas of potassium atoms trapped by laser beams in ultrahigh vacuum to less than a millionth of a degree above absolute zero temperature, where it partly forms a Bose-Einstein Condensate.

Those are typically weakly interacting, but in their experiment, they increase the interaction so much that the gas becomes hydrodynamic. They excite standing waves at different frequencies and observe two resonances of so-called first and second sound.

This effect is well studied in quantum liquids like superfluid helium, but the compressibility of their Bose gas is as large as the one of air, so it is still a gas, not a liquid. Remarkably, Landau’s famous two-fluid model, a theory developed for superfluid helium in the 1940s, still describes their superfluid gas well. In their system, the two fluids mainly consist of the condensed and non-condensed parts of the gas respectively.

They experimentally resolve the relative motion of the two parts, which oscillate together in the classical first sound but move opposite to each other in second sound. The microscopic theoretical description of their gas is much simpler than the one for a liquid, promising new insights into the understanding of quantum hydrodynamics.