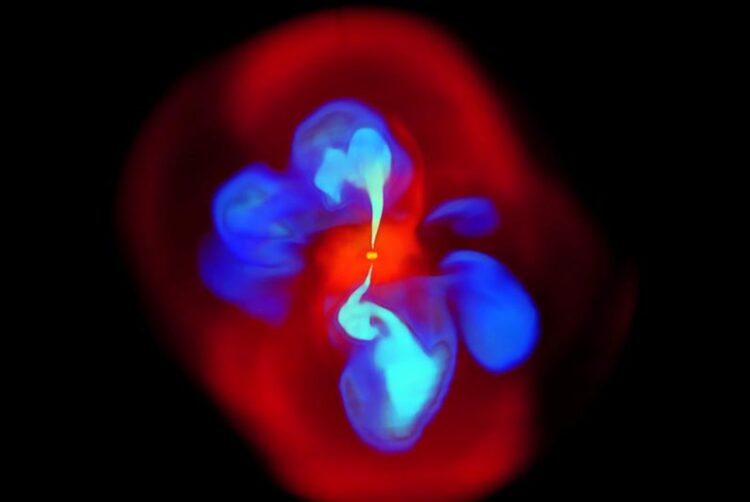 A still image taken from the 3D simulation of the natural development of an X-shaped jet. The gas (bright red) falls into the black hole, which launches a pair of relativistic jets (light blue). The jets propagate vertically and shock the ambient gas (dark red) The older cavities (dark blue) buoyantly rise at an angle to the vertically propagating jets to form the X-shape.
Credit: Aretaios Lalakos/Northwestern University

When astronomers use radio telescopes to gaze into the night sky, they typically see elliptical-shaped galaxies, with twin jets blasting from either side of their central supermassive black hole. But every once in a while — less than 10% of the time — astronomers might spot something special and rare: An X-shaped radio galaxy, with four jets extending far into space.

The study will be published on Aug. 29 in the Astrophysical Journal Letters. It marks the first large-scale galaxy accretion simulation that tracks the galactic gas far from the supermassive black hole all the way toward it.

Surprisingly, the researchers found that the galaxy’s characteristic X-shape resulted from the interaction between the jets and the gas falling into the black hole. Early in the simulation, the infalling gas deflected the newly formed jets, which turned on and off, erratically wobbled and inflated pairs of cavities in different directions to resemble an X-shape. Eventually, however, the jets became strong enough to push through the gas. At this point, the jets stabilized, stopped wobbling and propagated along one axis.

“We found that even with simple symmetric initial conditions, you can have quite a messy result,” said Northwestern’s Aretaios Lalakos, who led the study. “A popular explanation of X-shaped radio galaxies is that two galaxies collide, causing their supermassive black holes to merge, which changes the spin of the remnant black hole and the direction of the jet. Another idea is that the jet’s shape is altered as it interacts with large-scale gas enveloping an isolated supermassive black hole. Now, we have revealed, for the first time, that X-shaped radio galaxies can, in fact, be formed in a much simpler way.”

Lalakos is a graduate student in Northwestern’s Weinberg College of Arts and Sciences and a member of the Center for Interdisciplinary Exploration and Research in Astrophysics (CIERA). He is co-advised by paper coauthor Sasha Tchekhovskoy, an assistant professor of physics and astronomy at Northwestern and key member of CIERA, and Ore Gottlieb, a CIERA postdoctoral fellow.

Although radio galaxies emit visible light, they also encompass large regions of radio emission. Perhaps the most famous radio galaxy is M87, one of the most massive galaxies in the universe, which was further popularized in 2019 when the Event Horizon Telescope imaged its central supermassive blackhole. First coined in 1992, X-shaped radio galaxies make up less than 10% of all radio galaxies.

When Lalakos set out to model a black hole, he did not expect to simulate an X-shaped galaxy. Instead, he aimed to measure the amount of mass eaten by a black hole. He inputted simple astronomical conditions into the simulation and let it run. Lalakos did not initially recognize the importance of the emerging X-shape, but Tchekhovskoy reacted with enthusiastic fervor.

“He said, ‘Dude, this is very important! This is an X-shape!’” Lalakos said. “He told me that astronomers have observed this in real life and didn’t know how they formed. We created it in a way that no one had even speculated before.”

In previous simulations, other astrophysicists have attempted to create X-shaped structures artificially in order study how they arise. But Lalakos’ simulation organically led to the X-shape.

“In my simulation, I tried to assume nothing,” Lalakos said. “Usually, researchers put a black hole in the middle of a simulation grid and place a large, already-formed gaseous disk around it, and then they may add ambient gas outside the disk. In this study, the simulation starts without a disk, but soon one forms as the rotating gas gets closer to the black hole. This disk then feeds the black hole and creates jets. I made the simplest assumptions possible, so the whole outcome was a surprise. This is the first time anyone has seen X-shaped morphology in simulations from very simple initial conditions.”

‘Not lucky enough to see them’

Because the X-shape only emerged early in the simulation — until the jets strengthened and stabilized — Lalakos believes X-shaped radio galaxies might appear more frequently, but last a very short time, in the universe than previously thought.

“They might arise every time the black hole gets new gas and starts eating again,” he said. “So they might be happening frequently, but we might not be lucky enough to see them because they only happen for as long as the power of the jet is too weak to push the gas away.”

Next, Lalakos plans to continue running simulations to better understand how these X-shapes arise. He looks forward to experimenting with the size of the accretion disks and spins of central black holes. In other simulations, Lalakos included accretion disks that were almost non-existent all the way up to extremely large — none led to the elusive X-shape.

“For most of the universe, it’s impossible to zoom in right at the center and see what’s happening very near a black hole,” Lalakos said. “And even the things we can observe, we are constrained by time. If the supermassive black hole is already formed, we cannot observe its evolution because human lifetime is too short. In most cases, we rely on simulations to understand what happens near a black hole.”