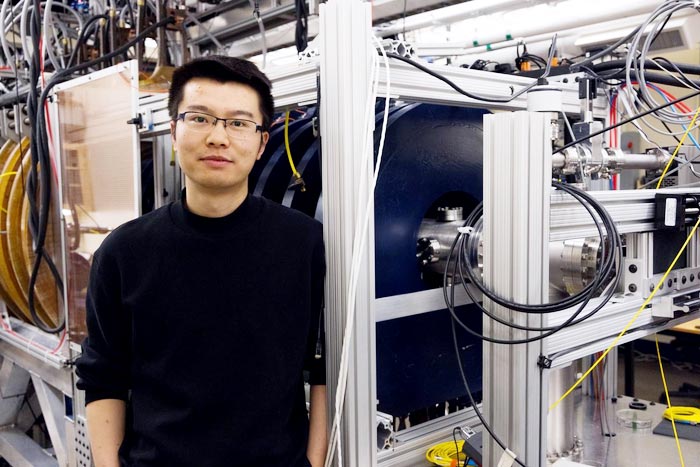 A West Virginia University postdoctoral researcher in the Department of Physics and Astronomy has made a breakthrough in the study of magnetic reconnection, which could prevent space storms from wreaking havoc on the Earth’s satellite and power grid systems.

Peiyun Shi’s research is the first-of-its-kind in the laboratory setting and is part of the PHASMAproject, a complex experiment composed of advanced diagnostics, electromagnets and lab-created plasma to reveal new details about how the universe functions.

For his experiment, Shi uses a laser-based diagnostic to probe plasma. Laser beams are directed in the diagnostic and the light scatters off of electrons. The way the light scatters gives insight into how fast the electrons are moving. And because the plasma is more than 10,000 degrees Fahrenheit, the lasers allow for measuring particles without using a probe or a thermometer which would melt at such high temperatures.

According to Shi, the technique is analogous to the Doppler effect, which is an increase or decrease in the frequency of sound or light waves emanating from a source as an observer moves towards or away from the source.

Shi’s findings were published in Physical Review Letters, considered one of the most prestigious journals in physics.

“It’s like a radar gun for particles,” said Earl Scime, director of the WVU Center for Kinetic Experiment, Theory and Integrated Computation Physics and Oleg D. Jefimenko professor of physics. According to Scime, similar studies are only able to determine the average properties of the electrons, but with the technology available as part of the PHASMA project, Shi is able to measure the actual speeds of the electrons.

“Our work proves to the fundamental plasma community that advanced laser diagnostics can measure important kinetic features not accessible to any other conventional diagnostics,” Shi said. “This is essential for understanding various plasma physics processes and for complementing modern satellite observations. It’s a great privilege to work on such a promising project with a fantastic team here, and the productive collaboration with Paul Cassak and his graduate M. Hasan Barbhuiya is also critical for this work and much appreciated.”

This research has a big impact on broader issues such as predicting space weather events. Magnetic reconnection plays a major role in how eruptions of plasma occur on the sun. Those eruptions can result in solar flares which increase X-ray and ultraviolent emissions, which poses a threat to astronauts in the International Space Station. The eruptions can also result in large masses of plasma that travel through space and slam into the Earth’s magnetosphere. Those space storms can play havoc with satellite and power grid systems on Earth.

“Every time we understand more about magnetic reconnection, it has applications from space weather to thermonuclear fusion, to a basic understanding of how the universe works,” Scime said.

The PHASMA project is located in the Center for KINETIC Plasma Physics. PHASMA – or the PHAse Space MApping experiment as it’s officially dubbed – is the focus of the WVU Center for Kinetic Experiment, Theory and Integrated Computation Plasma Physics.

PHASMA is designed to make three-dimensional measurements of the motion of the ions and electrons in a plasma at very small scales and is the only facility in the world capable of performing these detailed measurements.

The facility was constructed through a grant from the National Science Foundation and receives ongoing support from NSF, the U.S. Department of Energy and NASA.