Wendelstein 7-X on the verge of new peak performance 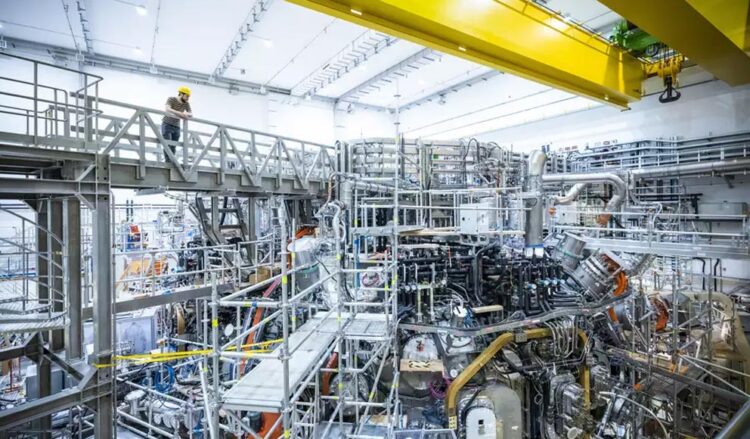 Wendelstein 7-X (W7-X) – the stellarator at the Max Planck Institute for Plasma Physics (IPP), Greifswald – has been significantly improved and will resume scientific experiments in autumn 2022. Featuring 6.8 kilometres of cooling pipes, doubly powerful heaters and 40 new diagnostics, the fusion facility, within a few years, should enable plasma operations lasting for up to 30 minutes.

In the last three years, engineers and technicians controlled the operations while learning how to use W7-X. Their aim was to fulfil the technical capabilities of the experiment. At this latest stage of improvements, they say the new water-cooled divertor (high-heat flux divertor) is the key to enhanced performance. Divertors are important components in fusion devices. Being instrumental for energy dissipation and regulation of particles exhaust in the plasma, they prevent their unfavourable contact with the vessel wall which could lead to contamination of the plasma itself.

To succeed in this function, the divertor baffles must withstand high temperatures. Owing to the 120 new divertor modules with a cooling system, W7-X can now operate at significantly higher plasma energies. Thus the divertor and other components require a total of 6.8 kilometres of cooling pipes. These pipes of varying shapes and thicknesses were manufactured, insulated, fitted and welded. They form the 657 independent cooling circuits that dissipate heat in W7-X.

It will become possible in future to generate higher plasma energies via three new or upgraded heating systems with with a total of more than doubled output, these are:

Furthermore, 60 kilometres of additional cables and hoses were installed, adding to the 280 kilometres already in place. Finally, 40 diagnostics were upgraded or newly installed to ensure more precise and extensive plasma measurements.

From autumn 2022 onwards, an international team of scientists will once again drive W7-X to new heights of performance. “With the improved equipment, we want to be able to keep high-performance plasmas with up to 18 gigajoules of energy turnover stable for half an hour in a few years,” explains Professor Dr. Thomas Klinger, Head of Stellarator Transport and Stability Division, IPP, Greifswald. “Now it will be a matter of approaching this goal step-by-step and learning more about plasma operation at higher energies without putting too much stress on the machine too quickly,” he adds. For the upcoming experimental campaign (OP 2.1) alone, which is expected to last until end of March 2023, several hundred experiment proposals have been submitted by researchers from IPP, numerous international institutes as well as universities from the EU, US and Japan.

“An important task will be to learn how we can increase the heating energy arriving in the plasma and thus the plasma temperatures,” says Professor Klinger. Up to one gigajoule of energy turnover – injected heating power multiplied by duration of discharge – is planned for phase OP 2.1. Prior to the latest improvements, this value had reached 75 megajoules at most. The plasma energy content – kinetic energy of all plasma particles – could reach to up to 1 megajoule at that time. This is still as yet another stellarator world record. In addition, long-lasting plasmas of 100 seconds duration with good plasma values were achieved.

So far the heating of electrons in the plasma was indeed very successful. Electrons should then transfer their energy on to the ions and therefore heat the ions. However, the ions have not yet reached the expected temperatures. In this regard, the study of plasma turbulence would be crucial to future research. On the one hand, turbulence can play an important role in expulsions and removal of impurities in the plasma. On the other hand, it can cause anomalous losses of energy. It is the current task of the Greifswald researchers to understand and control this better in upcoming experiments.

Background
The aim of fusion research is to develop a power plant favourable to the climate and environment. Like the sun, it is to derive energy from fusion of atomic nuclei. Since the fusion fire only ignites at temperatures exceeding 100 million degrees, the fuel – a low-density hydrogen plasma – must not come into contact with cold vessel walls. Confined by magnetic fields, it levitates almost contact-free inside a vacuum chamber.

The magnetic cage of Wendelstein 7-X is created by a ring of 50 large superconducting magnetic coils. Their specific forms are the result of elaborate optimisation calculations. Although W7-X will not generate any energy, the facility is intended to prove that stellarators are suitable for use in power stations. With W7-X, the quality of the plasma confinement in a stellarator is to reach the level of competing tokamak-type systems for the first time.

About Max Planck Institute for Plasma Physics (IPP)
The research conducted at IPP in Germany (locations: Garching near Munich and Greifswald) is concerned with investigating the physical basis of a fusion power plant. Like the sun, such a plant aims to generate energy from fusion of atomic nuclei. IPP’s research is part of the European fusion program. With its workforce of approximately 1,100 IPP is one of the largest fusion research centres in Europe