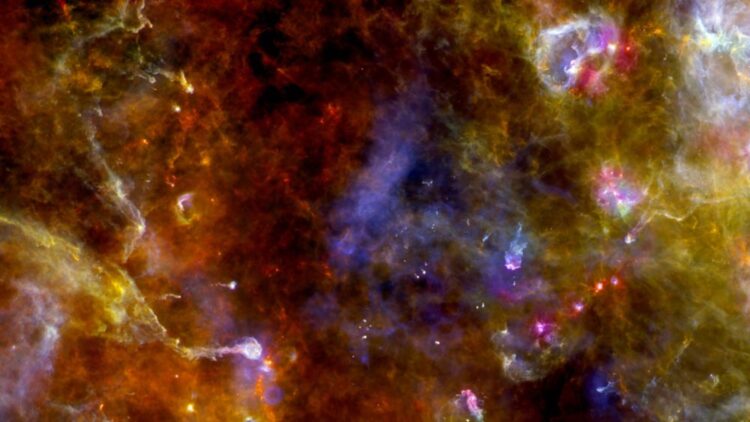 Clouds of interstellar dust and gas, here in the region "Cygnus-X" in the Swan constellation.

Astrophysicists at the University of Jena prove that dust particles in space are mixed with ice.

The matter between the stars in a galaxy – called the interstellar medium – consists not only of gas, but also of a great deal of dust. At some point in time, stars and planets originated in such an environment, because the dust particles can clump together and merge into celestial bodies. Important chemical processes also take place on these particles, from which complex organic – possibly even prebiotic – molecules emerge.

However, for these processes to be possible, there has to be water. In particularly cold cosmic environments, water occurs in the form of ice. Until now, however, the connection between ice and dust in these regions of space was unclear. A research team from Friedrich Schiller University Jena and the Max Planck Institute for Astronomy has now proven that the dust particles and the ice are mixed. They report their findings in the current issue of the research journal “Nature Astronomy”.

“Until now, we didn’t know whether ice is physically separated from the dust or mixed with individual dust moieties,” explains Dr Alexey Potapov of the University of Jena. “We compared the spectra of laboratory-made silicates, water ice and their mixtures with astronomical spectra of protostellar envelopes and protoplanetary disks. We established that the spectra are congruent if silicate dust and water ice are mixed in these environments.”

Astrophysicists can gain valuable information from this data. “We need to understand different physical conditions in different astronomical environments, in order to improve the modelling of physico-chemical processes in space,” says Potapov. This result would enable researchers to better estimate the amount of material and to make more accurate statements about the temperatures in different regions of the interstellar and circumstellar media.

Through experiments and comparisons, scientists at the University of Jena also observed what happens with water when the temperatures increase and the ice leaves the solid body to which it is bound and passes into the gas phase at about 180 Kelvin (-93 degrees Celsius).

“Some water molecules are so strongly bound to the silicate that they remain on the surface or inside dust particles,” says Potapov. “We suspect that such ‘trapped water’ also exists on or in dust particles in space. At least that is what is suggested by the comparison between the spectra obtained from the laboratory experiments and those in what is called the diffuse interstellar medium. We found clear indications that trapped water molecules exist there.”

The existence of such solid-state water suggests that complex molecules may also be present on the dust particles in the diffuse interstellar medium. If water is present on such particles, it is not a very long way to complex organic molecules, for example. This is because the dust particles usually consist of carbon, among other things, which, in combination with water and under the influence of ultraviolet radiation such as that found in the environment, promotes the formation of methanol, for example. Organic compounds have already been observed in these regions of the interstellar medium, but until now it has not been known where they originated.

The presence of solid-state water can also answer questions about another element: although we know the amount of oxygen in the interstellar medium, we previously had no information about where exactly around a third of it is located. The new research results suggest that the solid-state water in silicates is a hidden reservoir of oxygen.

Does solid-state water help in the formation of planets?

In addition, the “trapped water” can help in understanding how the dust accumulates, as it could promote the sticking together of smaller particles to form larger particles. This effect may even work in planet formation. “If we succeed in proving that ‘trapped water’ existed – or could exist – in building blocks of the Earth, there might possibly even be new answers to the question of how water came to Earth,” says Alexey Potapov. But as yet, these are only suppositions that the Jena researchers want to pursue in the future.