Vortex microscope sees more than ever before 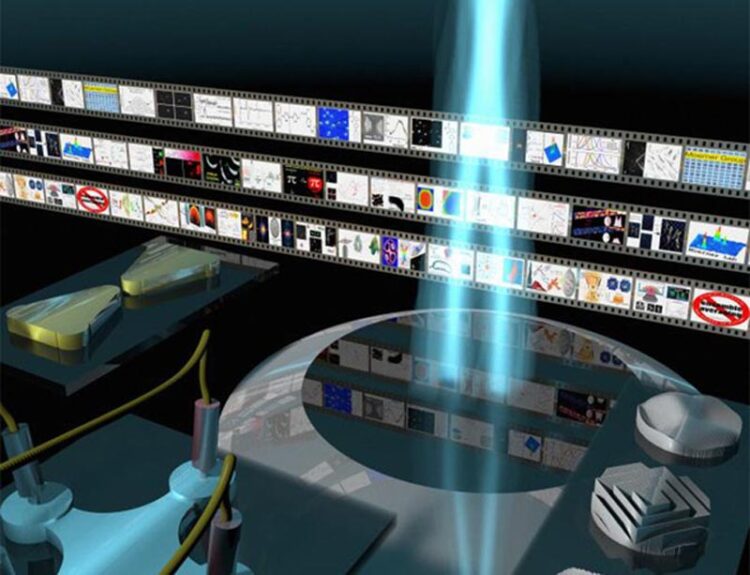 The vortex microscope offers a detailed look into how the surfaces of amyloid beta fibers interact with each other — how they bounce off each other or attach — and how their surfaces affect whether or not they begin to aggregate.
Credit: Matthew Lew

In a first for imaging, new microscope captures details, 3D motion of molecules in liquid.

Understanding the nitty gritty of how molecules interact with each other in the real, messy, dynamic environment of a living body is a challenge that must be overcome in order to understand a host of diseases, such as Alzheimer’s.

Until now, researchers could capture the motion of a single molecule, and they could capture its rotation — how it tumbles as it bumps into surrounding molecules — but only by compromising 3D resolution.

Now, the lab of Matthew Lew, assistant professor of electrical and systems engineering at the McKelvey School of Engineering at Washington University in St. Louis, has developed an imaging method that provides an unprecedented look at a molecule as it spins and rolls through liquid, providing the most comprehensive picture yet of molecular dynamics collected using optical microscopes.

The research was published in a special issue of the Journal of Physical Chemistry B. The Feb. 17, 2022, Festschrift is dedicated to Nobel laureate William E. (W.E.) Moerner, an imaging pioneer, Washington University alumnus and mentor to more than 100 students over the years, including Lew.

Moerner was the first person to observe optical signatures of a single molecule; previously, researchers weren’t sure it was even possible to measure such signals.

Moerner earned three bachelor’s degrees, all with honors, from Washington University in 1975. His bachelor’s degrees are in physics and in mathematics, both from Arts & Sciences, and in electrical engineering from the then-School of Engineering & Applied Science.

Now Lew’s lab is the first to be able to visualize the orientation and direction of a molecule’s rotational movement — how it spins and wobbles — while it’s in a liquid system.

The new imaging technology, called a vortex microscope, relies on a particular type of light: a polarized optical vortex.

“You can bend the light in a certain way so that the photons are spinning along their path,” Lew said. Instead of a straight “beam of light,” this optical vortex is shaped more like a corkscrew. It’s created by shining light through a helical-shaped lens, the top of which is uneven, sloping downward into a spiral.

The microscope also splits the light into two different directions of polarization, providing insight into the direction of the wobble of nano-sized light sources, the molecules in the sample.

For their experiments, Lew and first author Tianben Ding, then a postdoctoral researcher in Lew’s lab, looked at amyloid beta fibers. Clumps of these proteins, found in the brain, are associated with Alzheimer’s disease. The team added fluorescent tracer molecules to the fibers.

The tracers’ job was to probe the surfaces of the amyloid beta fibers. Each time a tracer bumped into a fiber, it emitted a light.

The light carried information about its interaction with the fiber. After it passed through the lens, that information was translated by an algorithm developed by Lew’s team.

An optical vortex is not a “point” of light, but it’s spread out in more of a donut shape. Based on the donut’s properties — is it stretched out along a certain axis, or darker in some places? — the algorithm can infer seven distinct properties of the tracer molecule, including its position and direction.

Lew said he and Ding were surprised when a computer simulation suggested an optical vortex might open up an opportunity to see motion and details at once.

“In our field, we’re always trying to think about concentrating the light because our light sources are so weak,” Lew said.

“It was surprising that spreading the light out into a donut shape would be useful at all.”

Because the team used a polarized optical vortex, they also can determine the direction of the wobble, a novel ability of the vortex microscope.

The ways in which the molecule interacts with the fiber can, in turn, help paint a picture of the fiber’s motion and topology.

Putting it all together, the vortex microscope offers a detailed look into how the surfaces of these amyloid beta fibers interact with each other — how they bounce off each other or attach — and how their surfaces affect whether or not they begin to aggregate.

“This is the first time we can measure these very detailed dynamics of how molecules move and rotate inside liquid systems,” Lew said.