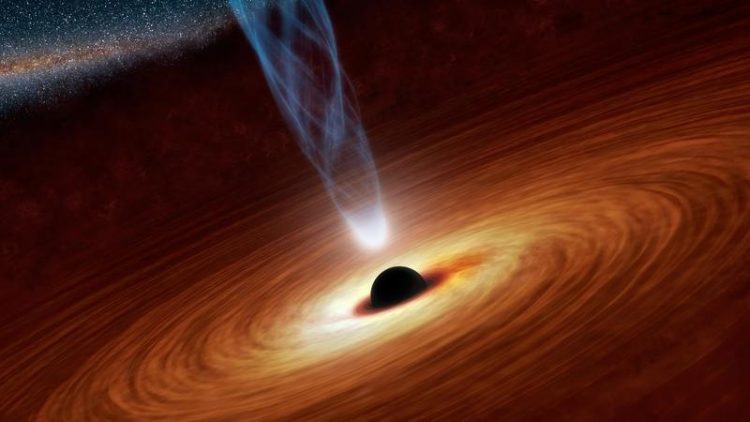 An artist's view of the nuclear region of an active galaxy with a disk of accreting material (brown/yellow) and a powerful, collimated radio jet perpendicular t o the disk. Credit: NASA JPL/CalTech

A team led by Lars Fuhrmann from MPIfR Bonn, performed intensive, multi-frequency radio observations with some of the best single-dish radio telescopes in combination with NASA's Fermi Telescope, to study the place where the high energy outbursts occur.

For the first time a connection between outbursts of high energy gamma-ray emission and their counterparts at many radio frequencies has been established for a large sample of galaxies. Measuring delays in time between these events finally produced better constraints on the exact location where the gamma-ray outbursts take place.

Special types of distant active galaxies and their innermost central regions show extreme physical processes. In the vicinity of a spinning supermassive black hole (billions of times heavier than our Sun) an enormous amount of energy is released, often in the most energetic form of light: high energy gamma-ray photons at mega- or even gigaelectronvolt (MeV/GeV) energies. This energy output is produced by feeding the black hole from surrounding stars, gas and dust.

Matter is spiraling in onto the black hole and strong magnetic fields channel some of the infalling gas into two powerful, well collimated “jets” of plasma accelerating away from the center with velocities approaching the speed of light. Many of the connected physical processes are not understood in detail so far, for example the production of high-energy gamma-ray photons and their place of origin inside the jet, or the origin of strong outbursts of emission across the whole electromagnetic spectrum. New instruments and observing programs covering a large fraction of the whole energy spectrum nearly simultaneously allow new insights into the extreme physics of these objects to be obtained.

“Since the era of the EGRET instrument on the Compton Gamma-ray Observatory in the 1990s, it has been discussed whether outbursts of radio emission are physically connected to similar events occurring at gamma rays” says Anton Zensus, Director at the Max Planck Institute for Radio Astronomy (MPIfR) and Fermi Affiliated Scientist. “Now with the combination of F-GAMMA radio and Fermi gamma-ray long-term data, and thanks to special analysis techniques, we finally know it!”

In addition to radio data within the F-GAMMA programme, the research team used gamma-ray observations of NASA’s Fermi Gamma-ray Space Telescope (launched in 2008), and a new statistical method to add up many radio and gamma-ray events. “It was illuminating to see the statistical noise going down and the average correlation popping up” explains Stefan Larsson, from Stockholm University.

“This finally demonstrates that a significant connection exists, even when using different radio frequencies” he continues. The study furthermore shows that the radio outbursts arrived at the telescopes later in time than their gamma-ray counterparts, with mean delays between 10 and 80 days. “For the first time we see that the radio delays become smoothly smaller towards higher radio frequencies”, adds Emmanouil Angelakis from MPIfR. “Towards higher frequencies we are looking deeper into the jet. The gamma-ray photons are thus coming from the innermost radio emitting jet regions.”

Using the measured time delays the team was finally able to estimate distances of a few ten light years or less between the radio and gamma-ray outburst regions. “Based on our delay measurements we could estimate for one of the brightest gamma-ray emitting active galaxies in the sky, 3C 454.3, how far away from the supermassive black hole most of the gamma-ray photons must have been produced. We are talking about only a few light year distances – very close to the footpoint of the jet and the black hole itself!” proudly reports Lars Fuhrmann from MPIfR, the lead author of the paper. “This has serious implications for the physical processes producing the gamma-ray photons!” he adds. In the meantime the team is continuing to use the “Joint Eye” on the universe to collect more data and more events for detailed follow-up studies.