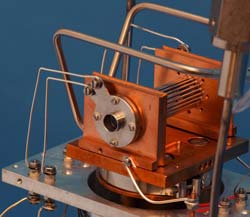 Laser spectroscopy of triatomic hydrogen ions is performed at the MPI for Nuclear Physics at temperatures near -210°C in this cryogenic ion trap, a 22-pole cage further developed from the original design by D. Gerlich at the University of Freiburg, Germany. Photo: MPIK, O. Novotný<br>

Although H3+ is the simplest polyatomic molecular ion, its vibrational spectrum at high excitations to date has been neither experimentally precisely known nor theoretically understood. Precise measurements at the Max Planck Institute for Nuclear Physics in Heidelberg now provided the decisive hints on how to dramatically improve the quantum theoretical calculations. (Physical Review Letters 108, 023002 (2012))

Within a molecule, the binding cloud allocates stable positions to the atomic nuclei and determines the frequencies at which they can oscillate around these positions. Ground and overtone frequencies of these vibrations give a fingerprint of the molecular structure and reveal how the electron cloud can resist to deformations of the molecule. The frequencies of very weak high-overtone oscillations must be measured to understand the molecular forces at large deformations. Even for the most basic neutral molecule H2, experiments and quantum calculations needed long time to reach precise agreement; this was reached about three decades ago.

Adding another proton to H2 yields H3+, the simplest polyatomic ion. With just the single additional proton added, challenges rise enormously, both for measuring the weak high-overtone vibration frequencies and for accurately calculating them by quantum theory. Although H3+ is an abundant and chemically very active molecular ion in interstellar space, it can be produced in the laboratory only under extremely dilute conditions, mostly in plasmas. Moreover, in the plasma environment where H3+ ions mostly occur, their temperatures are very high and lead to an essentially impenetrable forest of possible frequencies at which vibrations of these ions can be excited. Finally, only undeformed cold H3+ has a highly symmetrical triangular shape, while all types of asymmetric triangular and even linear shapes occur if it is strongly deformed.

These challenges were successfully met by a recent experiment at a cryogenic buffer gas ion trap at the MPIK, where since some years H3+ ions can be cooled down to only -210 °C for precise laser spectroscopy. In the new experiments, visible light was employed to put the ions into vibration instead of the infrared radiation used earlier, and vibrations up to the eighth overtone – extremely weak resonances – could be excited. After long searches in large intervals around inaccurately predicted transition frequencies, the scientists for the first time could find overtone excitation lines extending far into the visible spectral range.

The new precisely measured overtone frequencies gave decisive hints to an international group of molecular theorists on how to dramatically improve their first-principles quantum calculations of this fundamental triatomic molecule. The new measurements and quantum calculations now for the first time show precise agreement between each other up to strong deformations for a polyatomic molecule, similar to that obtained for the diatomic hydrogen molecule H2 about thirty years ago.