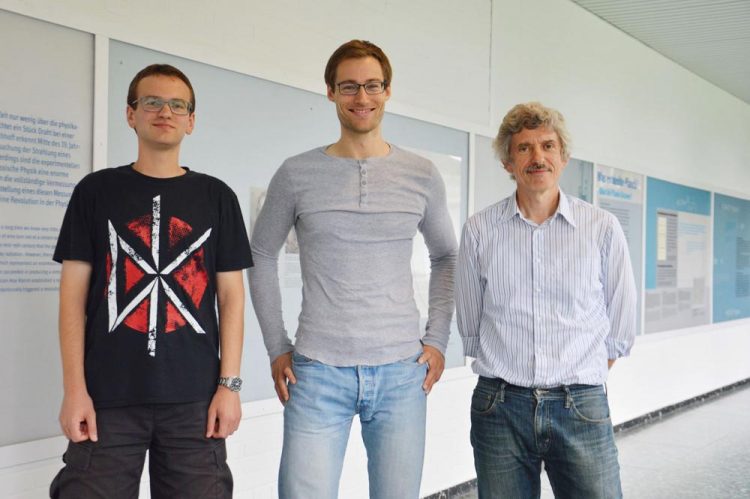 With their method the physicists Tobias Dornheim (left), Simon Groth and Professor Michael Bonitz from Kiel University are able to describe the properties of electrons at extreme temperatures such as in the interior of stars and planets. © Julia Siekmann, CAU

The properties of the matter, which surrounds us in our everyday life, are typically the result of complex interactions between electrons. These electrically-charged particles are one of the fundamental building blocks of nature. By now, they are well researched, and theoretical physics has determined the electronic structure of the majority of matter.

However, how matter behaves under extreme conditions is still largely unexplained. These can be found in places where very high pressure and high temperatures prevail, such as in the interior of stars and planets. Here, matter exists in an exotic state on the border between solid, liquid and gas.

A research group at Kiel University (CAU) and the Helmholtz-Zentrum Dresden-Rossendorf (HZDR) has now developed a new method to accurately describe the dynamic properties of this so-called “warm dense matter” for the first time. They have published their specially-developed computer simulations in the current issue of the renowned scientific journal Physical Review Letters.

Today, warm dense matter can also be produced experimentally in large research institutions, for example using the high-intensity lasers or free-electron lasers at the European XFEL in Hamburg and Schleswig-Holstein. Powerful lasers are used to compress and heat the matter enormously.

It can then be examined using another laser. A measurement of the so-called X-ray Thomson scattering – in other words, how the laser beam is scattered by free electrons – makes it possible to determine many properties of warm dense matter, such as its electrical conductivity, or its absorption of radiation.

However, this requires a comprehensive theoretical understanding of warm dense matter, and in particular of the so-called dynamic structure factor of the compressed hot electrons. To date, science has not been able to describe this reliably and accurately.

The interaction of the various factors which play a role here is just too complex, at temperatures of up to ten million degrees Celsius, and a density which usually only occurs in solids. In addition to the intense heat, this also includes the so-called Coulomb interaction, occurring when two negatively-charged electrons repel each other, as well as numerous quantum mechanical effects.

The research team under the direction of Michael Bonitz, professor of theoretical physics at the CAU, has now achieved a breakthrough: using complex simulations performed on supercomputers, they have developed a computational method, with which they could precisely describe the dynamic structure factor of electrons in warm dense matter for the first time. To achieve this, they further extended their own quantum Monte Carlo simulations, developed in recent years.

“Our new data provides unique insights,” explained Bonitz. “Remarkably, it has already been shown that the exact description of the repulsion between negative charges results in a significantly-modified Thomson scattering signal, in particular to a drastically changed plasmon dispersion, compared with previous theories.”

These predictions will now be checked experimentally. The results thus obtained are of extraordinary importance for the interpretation of state-of-the-art experiments with warm dense matter, such as those which will begin shortly at the European XFEL. For example, they can be used to determine key properties, such as the temperature of the electrons, or the velocity of propagation of waves which arise if the matter is bombarded with lasers.