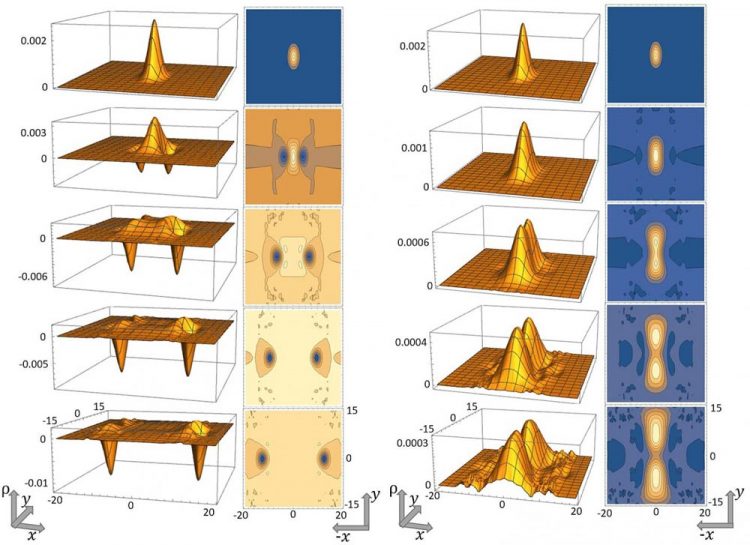 “There's a process in strongly interacting physics where fundamental particles, like electrons, can come together and behave as if they were a fraction of an electron,” said Davis, a graduate student in Foster's research group. “It's called fractionalization. It's a really exotic, fundamental process that shows up theoretically in many places. It may have something to do with high-temperature superconductivity, and it could be useful for building quantum computers. But it's very hard to understand and even harder to measure.”

In a recent paper in Physical Review Letters, Foster and Davis, both theoretical physicists, proposed an experiment to measure fractionalization not in electrons but in atoms so cold they follow the same quantum rules that dictate how electrons behave in quantum materials, a growing class of materials with exotic electronic and physical properties that governments and industry are eying for next-generation computers and electronic devices.

Quantum materials include high-temperature superconductors, one of the most puzzling mysteries in physics, and materials that exhibit topological phases, which earned its discoverers the 2016 Nobel Prize in Physics. The latter is the only place physicists have unambiguously measured fractionalization, in an exotic electronic state called the fractional quantum Hall effect. In this state, flat two-dimensional materials conduct electricity only along their one-dimensional edges.

“That's a 2D example,” said Foster, assistant professor of physics and astronomy at Rice. “And it's clear that fractionalization is occurring there because if you measure the conductance of these edge states they behave as though they're made of particles that behave like one-third of an electron.

“There are no real particles carrying one-third of the electric charge,” he said. “It's just the effect of all the electrons moving together in a such a way that if you create a local excitation, it will behave like an electron with one-third of a charge.”

Foster and Davis said the main motivation for describing their ultracold atomic test was to be able to observe fractionalization in a system that is very different from the fractional quantum Hall example.

“What we're aiming at is just seeing this physics in one other context in an unambiguous way,” said Foster, a member of Rice's Center for Quantum Materials (RCQM).

Their proposed experiment calls for laser-cooling atoms to act as stand-ins for electrons. In such experiments, lasers oppose the motion of atoms, progressively slowing them to colder and colder temperatures. The cold atoms are trapped by other lasers that form optical waveguides, one-dimensional channels where atoms can move left or right but cannot go around one another. The quantum behavior of the atoms in these one-dimensional guides mimics the behavior of electrons in 1D wires.

“All of the individual elements of the experiment have been developed, but we don't believe they've been put together in a single experimental setup,” Foster said. “That's where we need the help of experimentalists who are experts in laser-cooling.”

To observe fractionalization in an ultracold system, Foster and Davis propose creating a set of parallel 1D waveguides that are all in the same two-dimensional plane. A few additional atoms would populate the 1D guides near the center of the experiment.

“So we'll start with the 1D 'wires,' or guides, and the initial density in the middle, and then we'll drop some of the lasers and allow the atoms to interact between the wires in a kind of 2D mesh,” Foster said. “We can very accurately describe the 1D system, where strong interactions cause the atoms to behave in a correlated way. Because the whole system is quantum mechanical and coherent, those correlations should get imprinted on the 2D system.

“Our probe is letting go of that extra bump of density and watching what it does,” he said. “If the atoms in the 1D guides are not interacting, then the bump will just spread out between the wires. But, if there was initial fractionalization due to correlated effects in the wires, what we can confidently calculate is that the density will do something completely different. It will go the other direction, flying down the wires.”

Foster said he's interested in discussing the feasibility of the test with ultracold atomic experimentalists.

“We know it can take years to build and perfect some of the experimental setups for these kinds of experiments,” Foster said. “As theorists, we know the ingredients we need, but we don't know the ones that will be most challenging to implement or if it may be easier to modify some setups as opposed to others. That's where we'll need the help of our experimental colleagues.”

RCQM leverages global partnerships and the strengths of more than 20 Rice research groups to address questions related to quantum materials. RCQM is supported by Rice's offices of the Provost and the Vice Provost for Research, the Wiess School of Natural Sciences, the Brown School of Engineering, the Smalley Institute for Nanoscale Science and Technology and the departments of Physics and Astronomy, Electrical and Computer Engineering, and Materials Science and NanoEngineering.

CAPTION: In an ultracold atomic experiment proposed by Rice University physicists Matthew Foster and Seth Davis, quantum fractionalization would be observed by density waves propagating in the direction of 1D quantum waveguides (left). In the absence of fractionalization (right), density waves would spread in a perpendicular direction. (Image courtesy of Matthew Foster/Rice University)

This news release can be found online at news.rice.edu.

Located on a 300-acre forested campus in Houston, Rice University is consistently ranked among the nation's top 20 universities by U.S. News & World Report. Rice has highly respected schools of Architecture, Business, Continuing Studies, Engineering, Humanities, Music, Natural Sciences and Social Sciences and is home to the Baker Institute for Public Policy. With 3,962 undergraduates and 3,027 graduate students, Rice's undergraduate student-to-faculty ratio is just under 6-to-1. Its residential college system builds close-knit communities and lifelong friendships, just one reason why Rice is ranked No. 1 for lots of race/class interaction and No. 2 for quality of life by the Princeton Review. Rice is also rated as a best value among private universities by Kiplinger's Personal Finance. To read “What they're saying about Rice,” go to http://tinyurl.com/RiceUniversityoverview.