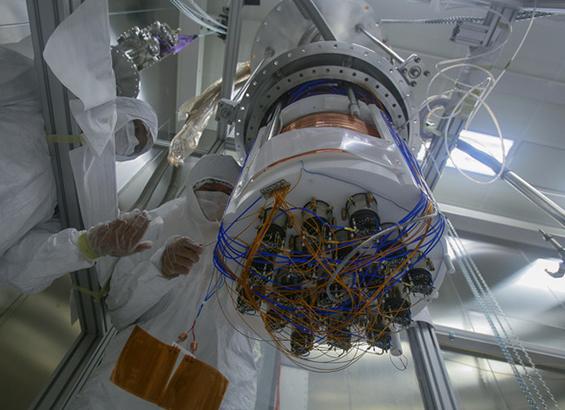 University of Houston scientists are helping to develop a technology that could hold the key to unraveling one of the great mysteries of science: what constitutes dark matter? Scientists believe dark matter makes up 85 percent of the matter in the universe, but nobody actually knows what dark matter is.

Renshaw and professor Ed Hungerford are leading a team of physicists from the College of Natural Sciences and Mathematics in the DarkSide program, an international research collaboration seeking to detect dark matter in the form of weakly interacting massive particles (WIMPs). In principle, when WIMP particles collide with ordinary nuclei, extremely small, low-energy nuclear recoil would result. In very simple terms, the scientists are trying to build technology that can detect WIMPS by detecting this very tiny, but observable recoil.

The UH team is using the DarkSide program's first physics detector, DarkSide-50 (DS-50), located underground at the Gran Sasso National Laboratory in Central Italy. The team and their collaborators have improved the sensitivity of the DS-50 detector in recent years by switching from atmospheric argon to low-radioactivity liquid argon, which was extracted from underground gas wells in Colorado. But a next-generation detector in development will take it even further.

DarkSide-20k (DS-20k) is currently being constructed using similar components from the present DarkSide experiment. Whereas DS-50 holds about 9.5 gallons (50 kilograms) of low-radioactivity liquid argon, this new detector, DS-20k, will employ new readout technology and will be some 400 times larger, holding 3,800 gallons (20,000 kilograms) of liquid argon. The new experiment is expected to start acquiring data at the Gran Sasso National Laboratory in 2021.

This detector, said Hungerford, will push the search for WIMP dark matter to new levels of sensitivity, hopefully finding the elusive WIMP. Or, he said, it could demonstrate that dark matter is not a particle, since this technology has now proven capable of searching for types of dark matter other than WIMPs.

“Previously, if you wanted to look for a specific kind of dark matter, you really had to look for a specific kind of detector. Now with this liquid argon technology, it's really opening the door to using a single technology to search for a handful of different kinds of dark matter,” added Renshaw, who recently presented DarkSide findings at the UCLA Dark Matter Conference.

While Hungerford and Renshaw continue their research in Houston, three other members of the UH team are manning the day-to-day operations in Italy. Research associate Nicola Canci manages the DS-50 detector and monitors its performance.

“The cryogenic system keeping the argon in liquid phase needs to be monitored, and some operations are needed to allow for the good performances of the detector. Electronics are monitored. Signals coming from the detector are improved, if needed, and the quality of data is routinely checked,” Canci said.

UH's participation in the DarkSide collaboration is funded by a $200,000 annual grant from the National Science Foundation.