uGMRT unravels the eclipses of millisecond pulsars in compact binary 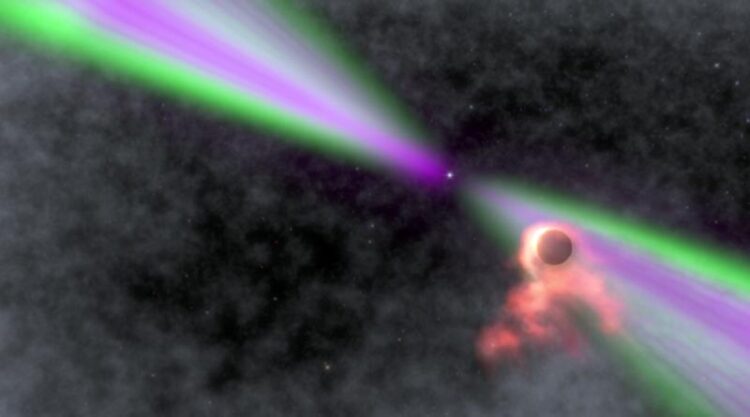 An artist’s impression of the spider millisecond pulsar and its small stellar companion. Powerful radiation and the pulsar's "wind" strongly heat the facing side of the star and ejects materials from the companion star. Pulsar’s radio beam (shown by magenta and green) is much fainter when passing through the materials around the companion star compared to other parts.
Credit: NASA's Goddard Space Flight Center/Cruz deWilde

A group of scientists working at the National Centre for Radio Astrophysics (NCRA), Pune have for the first time unravelled the eclipse mechanisms for the millisecond pulsars in compact binary systems using the upgraded Giant Metrewave Radio Telescope (uGMRT). Eclipses in millisecond pulsars have been known since the 1980’s, but the exact cause of these eclipses have not been understood till now. Devojyoti Kansabanik a Ph.D. student at NCRA is the lead author of the paper describing this work, which was done under the guidance of Dr. Bhaswati Bhattacharyya, also at NCRA. Dr. Jayanta Roy of NCRA and Prof. Benjamin Stappers from the Jodrell Bank Centre for Astrophysics, The University of Manchester are the other authors.

Nature’s best clocks, millisecond pulsars (MSPs) are ultra-dense dead stars that act like celestial lighthouses, with their radio light beams sweeping the Earth as fast as a few hundred times in a second. Being extremely stable rotators, MSPs act as laboratories for the study of matter in extreme conditions. MSPs often have orbital companions. In some of the MSP systems, the pulsar and the companion star have separations comparable to the Earth-Moon distance and interact strongly with each other. Energetic radiation from the pulsar could result in material from the companion being ablated and blown away. This diffuse material could eclipse the radio pulses emitted by the pulsar. Interestingly, the eclipse properties depend on the frequency of the radio pulse, with low radio frequencies being eclipsed, while high radio frequencies are not. The exact mechanism by which this occurs has not been established earlier. Understanding the eclipse mechanism and physical properties of these spider MSPs will provide more insight about the evolutionary processes and the ultimate fate of these exotic systems.

Devojyoti Kansabanik and team observed a spider MSP, J1544+4937 (which had been discovered earlier at the GMRT in 2013) using the upgraded uGMRT. The unique wide bandwidth sensitive observations allowed the authors to clearly measure how the eclipse depends on the radio frequency, particularly during the transitions as the pulsar went into and came out of eclipse. Dr. Bhaswati Bhattchayya says, “Using the wide bandwidth capability of the uGMRT we could study the eclipsing seamlessly from 300 to 850 MHz and determine the starting frequency of the frequency dependent eclipse with 20 times better accuracy than the previous estimations. This allowed us to study the cause of frequency dependent eclipsing for the first time by studying broadband radio spectrum, a crucial discriminator between different eclipse mechanisms.”

The lead author of this work, Devojyoti Kansabanik says, “We could determine the mechanism of the eclipses for a spider MSP unambiguously for the first time. There are several possible mechanisms like refraction, scattering and different types of absorptions of radio emission from the pulsar by the materials ejected from the companion star. Our study could distinctively spot that the eclipse is caused due to absorption by the magnetized materials ejected from the companion star and ruled out other possible mechanisms.”

The other team member of this project from NCRA, Dr. Jayanta Roy added, “The wide bandwidth low-frequency observing capability of the uGMRT aided with its unprecedented sensitivity will enable us to apply this method to other compact binary systems and to provide a consolidated view of the eclipse mechanism as well as the wind and magnetic field properties of the companion stars.”