Home / Physics and Astronomy / Twin jets pinpoint the heart of an active galaxy
15.09.2016

Twin jets pinpoint the heart of an active galaxy 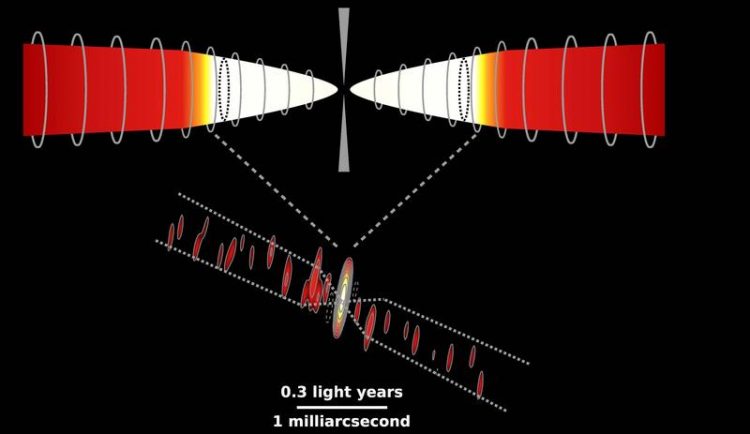 The technique used to investigate the inner details of NGC 1052 is known as very-long-baseline interferometry, and has the potential to locate compact jet cores at sizes close to the event horizon of the powering black hole. The black hole itself remains invisible.

The striking symmetry observed in the reported observations between both jets in NGC1052 allows the astronomers to locate the true center of activitiy inside the central feature, which makes, with the exception of our Galactic Centre, the most precisely known location of a super massive black hole in the universe.

Anne-Kathrin Baczko, who performed this work at the Universities of Erlangen-Nürnberg and Würzburg and at the Max-Planck-Institut für Radioastronomie, says: “NGC 1052 is a true key source, since it pinpoints directly and unambiguously the position of a supermassive black hole in the nearby universe.”

NGC 1052 is an elliptical galaxy in a distance of approximately 60 million light years in the direction of the constellation Cetus (the Whale).

The magnetic field by the supermassive black hole was determined measuring the compactness and the brightness of the central region of the elliptical galaxy NGC 1052. This feature is as compact as 57 microarcseconds in diameter, equivalent to the size of a DVD on the surface of the moon.

This amazing resolution was obtained by the Global mm-VLBI Array, a network of radio telescopes in Europe, the USA, and East Asia, that is managed by the Max-Planck-Institut für Radioastronomie. “It yields unprecedented image sharpness, and is soon to be applied to get event-horizon scales in nearby objects”, says Eduardo Ros from the MPI für Radioastronomie and collaborator in the project.

The unique powerful twin jets at a close distance, similar to the well-known active galaxy M 87, puts NGC 1052 in the pole position for future observations of nearby powerful galaxies in the oncoming era opened by the addition of ALMA, the Atacama Large Millimetre array, to the world-wide networks in radio interferometry.

The observation may help solving the long-standing mystery of how the powerful relativistic jets are formed, that can be seen in many active galaxies. The result has important astrophysical implications, since we see that jets can be driven by the extraction of magnetic energy from a rapidly rotating supermassive black hole.

The Global Millimetre VLBI Array consists of telescopes operated by the MPIfR, IRAM, Onsala, Metsähovi, Yebes and the VLBA. The data were correlated at the correlator of the MPIfR in Bonn, Germany. The VLBA is an instrument of the National Radio Astronomy Observatory, a facility of the National Science Foundation operated under cooperative agreement by Associated Universities, Inc.