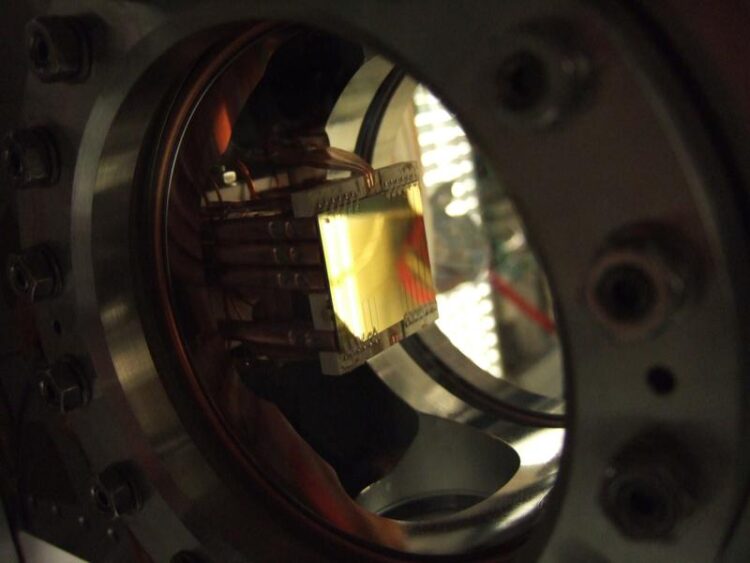 Quantum experiments that could previously only be performed with photons are now also possible with atoms: Beams of entangled atoms have been produced at TU Wien (Vienna).

Heads or tails? If we toss two coins into the air, the result of one coin toss has nothing to do with the result of the other. Coins are independent objects. In the world of quantum physics, things are different: quantum particles can be entangled, in which case they can no longer be regarded as independent individual objects, they can only be described as one joint system.

For years, it has been possible to produce entangled photons – pairs of light particles that move in completely different directions but still belong together. Spectacular results have been achieved, for example in the field of quantum teleportation or quantum cryptography. Now, a new method has been developed at TU Wien (Vienna) to produce entangled atom pairs – and not just atoms which are emitted in all directions, but well-defined beams. This was achieved with the help of ultracold atom clouds in electromagnetic traps.

“Quantum entanglement is one of the essential elements of quantum physics,” says Prof. Jörg Schmiedmayer from the Institute of Atomic and Subatomic Physics at TU Wien. “If particles are entangled with each other, then even if you know everything there is to know about the total system, you still cannot say anything at all about one specific particle. Asking about the state of one particular particle makes no sense, only the overall state of the total system is defined.”

There are different methods of creating quantum entanglement. For example, special crystals can be used to create pairs of entangled photons: a photon with high energy is converted by the crystal into two photons of lower energy – this is called “down conversion”. This allows large numbers of entangled photon pairs to be produced quickly and easily.

Entangling atoms, however, is much more difficult. Individual atoms can be entangled using complicated laser operations – but then you only get a single pair of atoms. Random processes can also be used to create quantum entanglement: if two particles interact with each other in a suitable way, they can turn out to be entangled afterwards. Molecules can be broken up, creating entangled fragments. But these methods cannot be controlled. “In this case, the particles move in random directions. But when you do experiments, you want to be able to determine exactly where the atoms are moving,” says Jörg Schmiedmayer.

Controlled twin pairs could now be produced at TU Wien with a novel trick: a cloud of ultracold atoms is created and held in place by electromagnetic forces on a tiny chip. “We manipulate these atoms so that they do not end up in the state with the lowest possible energy, but in a state of higher energy,” says Schmiedmayer. From this excited state, the atoms then spontaneously return to the ground state with the lowest energy.

However, the electromagnetic trap is constructed in such a way that this return to the ground state is physically impossible for a single atom – this would violate the conservation of momentum. The atoms can therefore only get trasferred to the ground state as pairs and fly away in opposite directions, so that their total momentum remains zero. This creates twin atoms that move exactly in the direction specified by the geometry of the electromagnetic trap on the chip.

The trap consists of two elongated, parallel waveguides. The pair of twin atoms may have been created in the left or in the right waveguide – or, as quantum physics allows, in both simultaneously. “It’s like the well-known double-slit experiment, where you shoot a particle at a wall with two slits,” says Jörg Schmiedmayer. “The particle can pass through both the left and the right slit at the same time, behind which it interferes with itself, and this creates wave patterns that can be measured.”

The same principle can be used to prove that the twin atoms are indeed entangled particles: only if you measure the entire system – i.e. both atoms at the same time – can you detect the wave-like superpositions typical of quantum phenomena. If, on the other hand, you restrict yourself to a single particle, the wave superposition disappears completely.

“This shows us that in this case it makes no sense to look at the particles individually,” explains Jörg Schmiedmayer. “In the double-slit experiment, the superpositions disappear as soon as you measure whether the particle goes through the left or the right slit. As soon as this information is available, the quantum superposition is destroyed. It is very similar here: if the atoms are entangled and you only measure one of them, you could theoretically still use the other atom to measure whether they both originated in the left or the right part of the trap. Therefore, the quantum superpositions are destroyed.”

Now that it has been proven that ultracold atom clouds can indeed be used to reliably produce entangled twin atoms in this way, further quantum experiments are to be carried out with these atom pairs – similar to those that have already been possible with photon pairs.