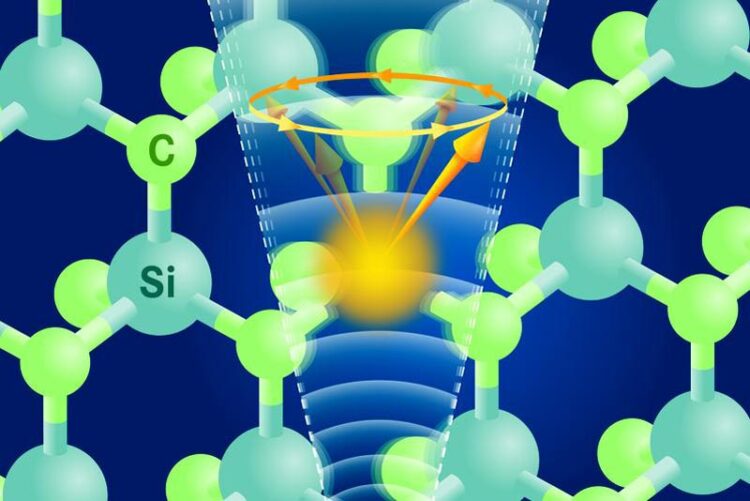 Acoustic manipulation of electron spins could lead to new methods of quantum control.

The captured electrons typically absorb light in the visible spectrum, so that a transparent material becomes colored under the presence of such centers, for instance in diamond. “Color centers are often coming along with certain magnetic properties, making them promising systems for applications in quantum technologies, like quantum memories – the qubits – or quantum sensors. The challenge here is to develop efficient methods to control the magnetic quantum property of electrons, or, in this case, their spin states,” Dr. Georgy Astakhov from HZDR’s Institute of Ion Beam Physics and Materials Research explains.

His team colleague Dr. Alberto Hernández-Mínguez from the Paul-Drude-Institut expands on the subject: “This is typically realized by applying electromagnetic fields, but an alternative method is the use of mechanical vibrations like surface acoustic waves. These are sound waves confined to the surface of a solid that resemble water waves on a lake. They are commonly integrated in microchips as radio frequency filters, oscillators and transformers in current electronic devices like mobile phones, tablets and laptops.”

Tuning the spin to the sound of a surface

In their paper, the researchers demonstrate the use of surface acoustic waves for on-chip control of electron spins in silicon carbide, a semiconductor, which will replace silicon in many applications requiring high-power electronics, for instance, in electrical vehicles. “You might think of this control like the tuning of a guitar with a regular electronic tuner,” Dr. Alexander Poshakinskiy from the Ioffe Physical-Technical Institute in St. Petersburg weighs in and proceeds: “Only that in our experiment it is a bit more complicated: a magnetic field tunes the resonant frequencies of the electron spin to the frequency of the acoustic wave, while a laser induces transitions between the ground and excited state of the color center.”

These optical transitions play a fundamental role: they enable the optical detection of the spin state by registering the light quanta emitted when the electron returns to the ground state. Due to a giant interaction between the periodic vibrations of the crystal lattice and the electrons trapped in the color centers, the scientists realize simultaneous control of the electron spin by the acoustic wave, in both its ground and excited state.

At this point, Hernández-Mínguez calls into play another physical process: precession. “Anybody who played as a child with a spinning top experienced precession as a change in the orientation of the rotational axis while trying to tilt it. An electronic spin can be imagined as a tiny spinning top as well, in our case with a precession axes under the influence of an acoustic wave that changes orientation every time the color center jumps between ground and excited state. Now, since the amount of time spent by the color center in the excited state is random, the large difference in the alignment of the precession axes in the ground and excited states changes the orientation of the electron spin in an uncontrolled way.”

This change renders the quantum information stored in the electronic spin to be lost after several jumps. In their work, the researchers show a way to prevent this: by appropriately tuning the resonant frequencies of the color center, the precession axes of the spin in the ground and excited states becomes what the scientists call collinear: the spins keep their precession orientation along a well-defined direction even when they jump between the ground and excited states.

Under this specific condition, the quantum information stored in the electron spin becomes decoupled from the jumps between ground and excited state caused by the laser. This technique of acoustic manipulation provides new opportunities for the processing of quantum information in quantum devices with dimensions similar to those of current microchips. This should have a significant impact on the fabrication cost and, therefore, the availability of quantum technologies to the general public.

The Helmholtz-Zentrum Dresden-Rossendorf (HZDR) performs – as an independent German research center – research in the fields of energy, health, and matter. We focus on answering the following questions:
• How can energy and resources be utilized in an efficient, safe, and sustainable way?
• How can malignant tumors be more precisely visualized, characterized, and more effectively treated?
• How do matter and materials behave under the influence of strong fields and in smallest dimensions?
To help answer these research questions, HZDR operates large-scale facilities, which are also used by visiting researchers: the Ion Beam Center, the High-Magnetic Field Laboratory Dresden, and the ELBE Center for High-Power Radiation Sources.
HZDR is a member of the Helmholtz Association and has six sites (Dresden, Freiberg, Görlitz, Grenoble, Leipzig, Schenefeld near Hamburg) with almost 1,200 members of staff, of whom about 500 are scientists, including 170 Ph.D. candidates.