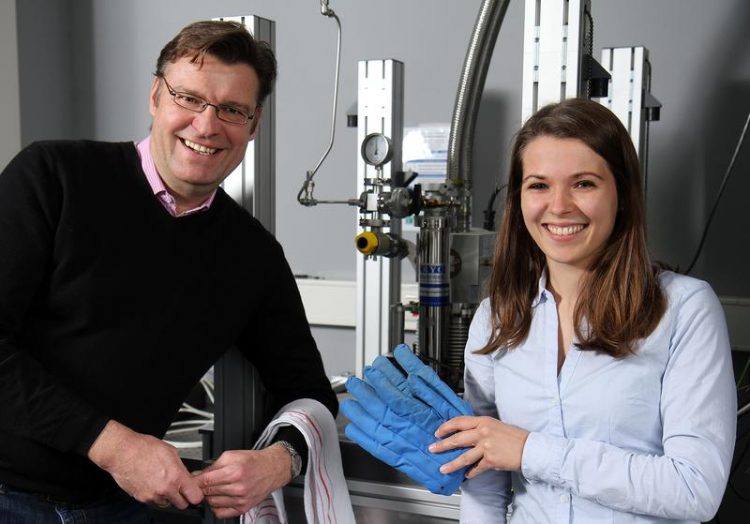 Prof. Dr. Volker Schünemann, Lena Scherthan and their colleagues are working on a new form of magnets. Credit: Koziel/TUK

Whether hard disks, memory chips or sensors – magnets make the storage of data possible in the first place. The basis for magnetism is the spin of electrons, also known as the intrinsic angular momentum. The team around Professor Dr. Volker Schünemann and his doctoral student Lena Scherthan from the Department of Biophysics and Medical Physics at the Technische Universität Kaiserslautern (TUK) is working on a new form of magnets, the single molecule magnets. Such magnets could make it possible to store considerably more information in the future.

“Single molecule magnets consist of a metal centre that is connected to so-called organic ligands and thus form a molecule,” said Scherthan, the first author of the current study. “Only certain metals are suitable for this type of molecules. These include iron, for example, but also less well-known chemical elements from the lanthanide group, such as the dysprosium with which we work.” They are also known as rare earth elements. The special thing about them: Their electrons can generate a magnetic moment that is relatively large for a molecule. The Kaiserslautern research team and the research group led by chemist Professor Annie K. Powell from the Karlsruhe Institute of Technology (KIT) are investigating the storage capacity of this kind of single molecule magnets and how it can be improved.

In addition, special techniques are used: Mössbauer spectroscopy is an analytical method in which the absorption of atomic nuclei is investigated with the aid of high-energy X-rays. At the TUK campus, this method is used to investigate iron-containing substances and even proteins. Schünemann’s team used a radiation source (Advanced Photon Source) at the US Argonne National Laboratory near Chicago for their experiments.

For the first time, it has now been possible to investigate a single molecule magnet with dysprosium as its metal centre using this method. “The experiments were carried out at extremely low temperatures of -269 degrees Celsius in liquid helium,” the physicist continued. Such low temperatures are necessary because many of the single molecule magnets developed to date, only exhibit their characteristic properties under these conditions.

In addition, this spectroscopic method provides a more detailed view of the atomic cosmos. This technique allows researchers to draw conclusions about the interactions between the metal nucleus and ligands. “We can examine the properties of the metal centre in a similar way to slow motion,” the scientist compares the method she presents with her fellow researchers in her current study. “We see additional information compared to our conventional methods. For example, we can see how quickly the system returns to its original state and how long the molecule's storage time is.”

The goal of the Kaiserslautern and Karlsruhe research groups is to better understand the characteristic properties of single molecule magnets in order to strategically develop further systems. In addition to systems that only have a single metal centre, the TUK team and Professor Powell's group are also investigating the properties of single molecule magnets that have two or more metal centres. The focus here is on the interactions between the metals. “This might lead to better storage behaviour,” said Scherthan.

The work took place within the framework of the Transregio Collaborative Research Centre “Cooperative Effects in Homo and Heterometallic Complexes” (SFB/TRR 883 MET). Research teams from chemistry and physics work interdisciplinary on molecular systems with two to four metal centres. One of the goals is to develop new properties and functions at the molecular level, for example to obtain more efficient materials for magnetic storage or more effective catalysts for chemical reactions.

The study was published in the renowned journal “Angewandte Chemie”. The editorial staff of the journal also classifies the work as outstanding, so that it has made it to the back cover of the current printed edition: 161Dy Time-Domain Synchrotron Mössbauer Spectroscopy for Investigating Single-Molecule Magnets Incorporating Dy Ions
DOI: 10.1002/anie.201810505
https://onlinelibrary.wiley.com/doi/full/10.1002/ange.201810505