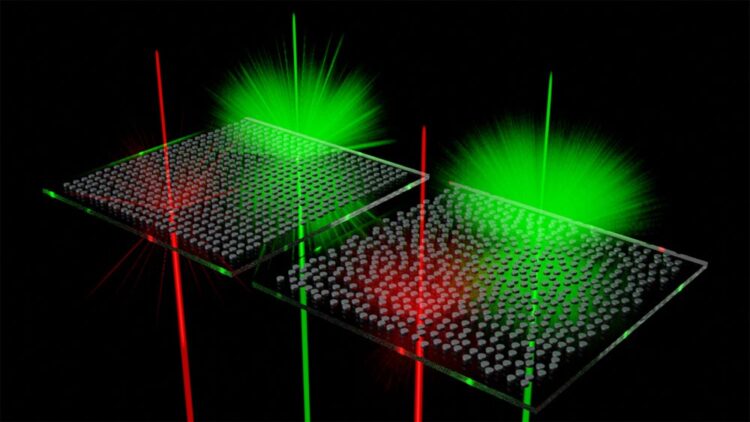 Scattering centers – silicon nanoparticles represented as black disks – on the transparent substrate scatter (in an adjustable way) certain colors of light, other wavelengths are not influenced.
Credit: © Dennis Arslan/University of Jena

Miniaturization of optical components is a challenge in photonics. Researchers of Karlsruhe Institute of Technology (KIT) and Friedrich Schiller University Jena have now succeeded in developing a diffuser, a disk that scatters light, based on silicon nanoparticles. It can be used to specifically control the direction, color, and polarization of light. This novel technology may be used in transparent screens or augmented reality. The results are reported in Advanced Materials (DOI: https://doi.org/10.1002/adma.202105868).

Photonics, the science of generating, spreading, and detecting light, is considered the major driver in developing technologies for the 21st century. The challenge consists in miniaturizing conventional optical elements, such as lenses, mirrors, prisms, or diffusers, and enhancing their performance with features only accessible in the realm of nanophotonics. This leads to new applications, such as miniaturized sensors in autonomous vehicles or integrated photonic quantum computers.

Diffusers are disks that scatter incident light in all directions with the help of small scattering centers. To overcome the bulkiness of conventional optical diffusers, researchers of KIT and Friedrich Schiller University Jena applied a layer of specifically designed silicon nanoparticles to a substrate and arranged the particles in a disordered, but carefully planned manner. These nanoparticles are a hundred times thinner than a human hair and interact with certain, adjustable wavelengths of light. The direction, color, and polarization of light can be controlled specifically with these metasurfaces.

The team of researchers faced two fundamental questions: “To what an extent can we make the optical diffuser smaller and what must the disorder in the arrangement of the nanoparticles be like?,” says Aso Rahimzadegan, doctoral researcher of KIT and one of the two main authors of the study. “Remarkably, we found a sweet spot for the amount of disorder that leads to perfect diffusion.“

Dennis Arslan, doctoral researcher at University of Jena and also main author, explains: “We fabricated metasurface diffusers which appeared to be equally bright from all directions when looked at with the naked eye. The remarkable aspect is that this happens in a layer that is 0.2 micrometers in thickness only. The diffusers scatter light of a specific color and let other wavelengths pass undisturbed.” Such property is useful in scientific applications, but also consumer devices, such as transparent screens that can be viewed from both sides, holographic projectors, or augmented reality headsets profit from it. Combination of experimental and theoretical expertise from both partners made it possible to provide answers to these challenging scientific questions.

Research that led to these results was carried out under the “Tailored Disorder” priority program funded by the German Research Foundation. At KIT, this work was part of the 3D Matter Made to Order Cluster of Excellence.