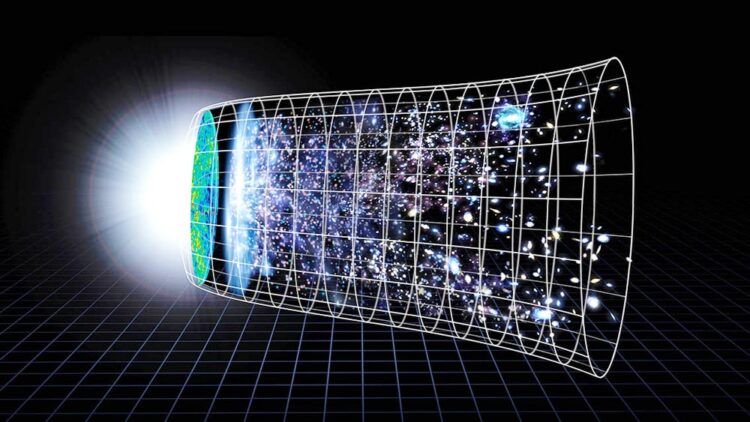 A representation of the evolution of the universe over 13.77 billion years. The far left depicts the earliest moment we can now probe, when a period of "inflation" produced a burst of exponential growth in the universe. (Size is depicted by the vertical extent of the grid in this graphic.) For the next several billion years, the expansion of the universe gradually slowed down. More recently, the expansion has begun to speed up again.
© NASA's Goddard Space Flight Center

It is almost always assumed in cosmological calculations that there is a even distribution of matter in the universe. This is because the calculations would be much too complicated if the position of every single star were to be included. In reality, the universe is not uniform: in some places there are stars and planets, in others there is just a void. Physicists Michael te Vrugt and Prof. Raphael Wittkowski from the Institute of Theoretical Physics and the Center for Soft Nanoscience (SoN) at the University of Münster (Germany) have, together with physicist Dr. Sabine Hossenfelder from the Frankfurt Institute for Advanced Studies (FIAS; Germany), developed a new model for this problem. Their starting point was the Mori-Zwanzig formalism, a method for describing systems consisting of a large number of particles with a small number of measurands. The results of the study have now been published in the journal “Physical Review Letters”.

Background: The theory of general relativity developed by Albert Einstein is one of the most successful theories in modern physics. Two of the last five Nobel Prizes for Physics had associations with it: in 2017 for the measurement of gravitational waves, and in 2020 for the discovery of a black hole at the centre of the Milky Way. One of the most important applications of the theory is in describing the cosmic expansion of the universe since the Big Bang. The speed of this expansion is determined by the amount of energy in the universe. In addition to the visible matter, it is above all the dark matter and dark energy which play a role here – at least, according to the Lambda-CDM model currently used in cosmology.

“Strictly speaking, it is mathematically wrong to include the mean value of the universe’s energy density in the equations of general relativity”, says Sabine Hossenfelder. The question is now how “bad” this mistake is. Some experts consider it to be irrelevant, others see in it the solution to the enigma of dark energy, whose physical nature is still unknown. An uneven distribution of the mass in the universe may have an effect on the speed of cosmic expansion.

“The Mori-Zwanzig formalism is already being successfully used in many fields of research, from biophysics to particle physics,” says Raphael Wittkowski, “so it also offered a promising approach to this astrophysical problem.” The team generalised this formalism so that it could be applied to general relativity and, in doing so, derived a model for cosmic expansion while taking into consideration the uneven distribution of matter in the universe.

The model makes a concrete prediction for the effect of these so-called inhomogeneities on the speed of the expansion of the universe. This prediction deviates slightly from that given by the Lambda-CDM model and thus provides an opportunity to test the new model experimentally. “At present, the astronomical data are not precise enough to measure this deviation,” says Michael te Vrugt, “but the great progress made – for example, in the measurement of gravitational waves – gives us reason to hope that this will change. Also, the new variant of the Mori-Zwanzig formalism can also be applied to other astrophysical problems – so the work is relevant not only to cosmology.”