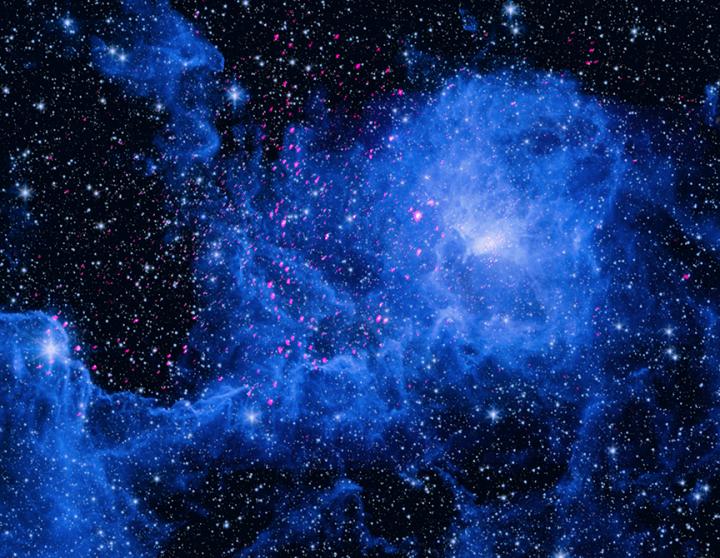 The Lagoon Nebula, one of the star-forming regions in the latest study, is about 4,400 light years from Earth in the Milky Way galaxy where stars. This field-of-view shows the southern portion of a large bubble of hydrogen gas, plus a cluster of young stars. X-rays from Chandra (purple) have been combined with infrared data (blue, gold, and white) have been combined with infrared data from the Spitzer Space Telescope in this composite image.
Credit: X-ray: NASA/CXC/Penn State/K. Getman, et al; Infrared: NASA/JPL/Spitzer

The long relationships between stars and the planets around them – including the Sun and the Earth – may be even more complex than previously thought. This is one conclusion of a new study involving thousands of stars using NASA’s Chandra X-ray Observatory.

By conducting the largest survey ever of star-forming regions in X-rays, a team of researchers has helped outline the link between very powerful flares, or outbursts, from youthful stars, and the impact they could have on planets in orbit.

“Our work tells us how the Sun may have behaved and affected the young Earth billions of years ago,” said Kostantin Getman of Pennsylvania State University in University Park, Pennsylvania who led the study. “In some ways, this is our ultimate origin story: how the Earth and Solar System came to be.”

The scientists examined Chandra’s X-ray data of more than 24,000 stars in 40 different regions where stars are forming. They captured over a thousand stars that gave off flares that are vastly more energetic than the most powerful flare ever observed by modern astronomers on the Sun, the “Solar Carrington Event” in 1859. “Super” flares are at least one hundred thousand times more energetic than the Carrington Event and “mega” flares up to 10 million times more energetic.

These powerful flares observed by Chandra in this work occur in all of the star-forming regions and among young stars of all different masses, including those similar to the Sun. They are also seen at all different stages in the evolution of young stars, ranging from early stages when the star is heavily embedded in dust and gas and surrounded by a large planet-forming disk, to later stages when planets would have formed and the disks are gone. The stars in the study have ages estimated to be less than 5 million years, compared to the Sun’s age of 4.5 billion years.

The team found several super-flares occur per week for each young star, averaged over the whole sample, and about two mega-flares every year.

“We want to know what kinds of impact – good and bad – these flares have on the early lives of planets,” said co-author Eric Feigelson, also of Penn State. “Flares this powerful can have major implications.”

Over the past two decades, scientists have argued that these giant flares can help “give” planets to still-forming stars by driving gas away from disks of material that surround them. This can trigger the formation of pebbles and other small rocky material that is a crucial step for planets to form.

On the other hand, these flares may “take away” from planets that have already formed by blasting any atmospheres with powerful radiation, possibly resulting in their complete evaporation and destruction in less than 5 million years.

The researchers also performed detailed modeling of 55 bright super- and mega-flares and found that most of them resemble long-lasting flares seen on the Sun that produce “coronal mass ejections,” powerful ejections of charged particles that can damage planetary atmospheres. The Solar Carrington Event involved such an ejection.

This work is also important for understanding the flares themselves. The team found that the properties of the flares, such as their brightness and frequency, are the same for young stars with and without planet-forming disks. This implies that the flares are likely similar to those seen on the Sun, with loops of magnetic field having both footprints on the surface of the star, rather than one anchored to the disk and one to the star.

“We’ve found that these giant flares are like ones on the Sun but are just greatly magnified in energy and frequency, and the size of their magnetic loops,” said co-author Gordon Garmire from the Huntingdon Institute for X-ray Astronomy in Huntingdon, Pennsylvania”. Understanding these stellar outbursts may help us understand the most powerful flares and coronal mass ejections from the Sun.”

This work was presented at the recent meeting of the American Astronomical Society meeting and is described in two papers accepted for publication in The Astrophysical Journal and available here and here [arXiv URL to be added for Paper II]. NASA’s Marshall Space Flight Center manages the Chandra program. The Smithsonian Astrophysical Observatory’s Chandra X-ray Center controls science from Cambridge, Massachusetts, and flight operations from Burlington, Massachusetts.