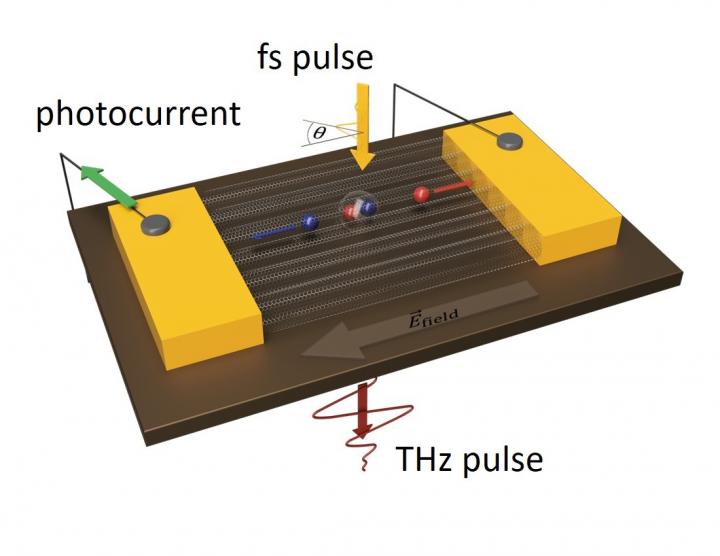 Carbon nanotubes (CNTs), a model one-dimensional (1D) material made up entirely of carbon atoms, have attracted considerable attention ever since their discovery because of the unique properties arising from quantum confinement effects.

CNTs have been labeled as one of the materials for next-generation optoelectronic devices. Critical towards this advancement is understanding how quasiparticles – theoretical particles used to describe observable phenomena in solids – behave and interact with each other in a 1D system.

This requires a fundamentally different model compared to a conventional 3D material like silicon as a consequence of the reduced dimensionality in CNTs.

“It was difficult to develop a terahertz radiation device with an external high electric field in a specific direction to CNT,” says corresponding author Masayoshi Tonouchi.

By combining different experimental techniques, the team was able to directly probe the creation of free charge carriers in CNTs at different time scales after photoexcitation.

Very complex interactions that involve different quasiparticles occur after the initial photoexcitation. These processes change over time, and being able to probe one of the quasiparticles makes it easier to understand the whole process.

Together with state-of-the-art simulations, the team was able to identify two key mechanisms that explain their data and helped them develop a detailed microscopic model describing quasiparticle interactions in a strong electric field in CNTs.

“We proposed a model in which electron-hole bound quasiparticles excited in the high energy E22 exciton band diverge to the low energy band and play a role in ultrafast electrical conduction. This model successfully explained the experimental facts and led to the clarification of the physical properties of CNTs.”

Their results shed light on a number of long-standing issues in CNT ultrafast dynamics, moving us closer towards the realization of advanced optoelectronics based on CNTs and other low-dimensional materials.

The article, “Terahertz Excitonics in Carbon Nanotubes: Exciton Autoionization and Multiplication,” was published in ACS Nano Letters at DOI: https://doi.org/10.1021/acs.nanolett.9b05082.