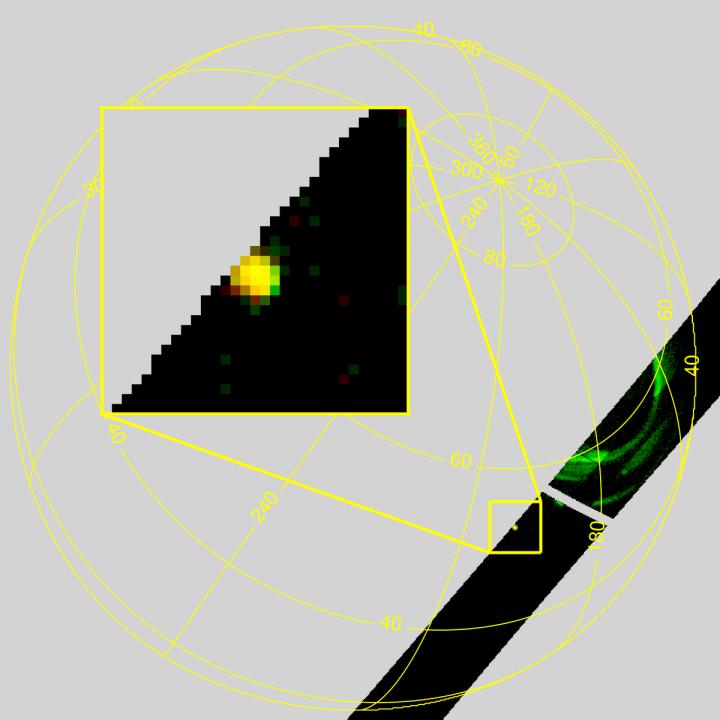 From aboard the Juno spacecraft, a Southwest Research Institute-led instrument observing auroras serendipitously spotted a bright flash above Jupiter’s clouds last spring. The Ultraviolet Spectrograph (UVS) team studied the data and determined that they had captured a bolide, an extremely bright meteoroid explosion in the gas giant’s upper atmosphere.

“Jupiter undergoes a huge number of impacts per year, much more than the Earth, so impacts themselves are not rare,” said SwRI’s Dr. Rohini Giles, lead author of a paper outlining these findings in Geophysical Research Letters. “However, they are so short-lived that it is relatively unusual to see them. Only larger impacts can be seen from Earth, and you have to be lucky to be pointing a telescope at Jupiter at exactly the right time. In the last decade, amateur astronomers have managed to capture six impacts on Jupiter.”

Since Juno arrived at Jupiter in 2016, UVS has been used to study the morphology, brightness and spectral characteristics of Jupiter’s auroras as the spacecraft cartwheels close to its surface every 53 days. During the course of a 30-second spin, UVS observes a swath of the planet. The UVS instrument has occasionally observed short-lived, localized ultraviolet emissions outside of the auroral zone, including a singular event on April 10, 2020.

“This observation is from a tiny snapshot in time — Juno is a spinning spacecraft, and our instrument observed that point on the planet for just 17 milliseconds, and we don’t know what happened to the bright flash outside of that time frame,” Giles said, “But we do know that we didn’t see it on an earlier spin or a later spin, so it must have been pretty short-lived.”

Previously, UVS had observed a set of eleven bright transient flashes that lasted 1 to 2 milliseconds. They were identified as Transient Luminous Events (TLEs), an upper atmospheric phenomenon triggered by lightning. The team initially thought this bright flash might be a TLE, however, it was different in two key ways. While it was also short-lived, it lasted at least 17 milliseconds, much longer than a TLE. It also had very different spectral characteristics. Spectra of TLEs and auroras feature emissions of molecular hydrogen, the main component of Jupiter’s atmosphere. This bolide event had a smooth “blackbody'” curve, which is what is expected from a meteor.

“The flash duration and spectral shape match up well with what we expect from an impact,” Giles said. “This bright flash stood out in the data, as it had very different spectral characteristics than the UV emissions from the Jupiter’s auroras. From the UV spectrum, we can see that the emission came from blackbody with a temperature of 9600 Kelvin, located at an altitude of 140 miles above the planet’s cloud tops. By looking at the brightness of the bright flash, we estimate that it was caused by an impactor with a mass of 550-3,300 pounds.”

Comet Shoemaker-Levy was the largest observed Jupiter impactor. The comet broke apart in July 1992 and collided with Jupiter in July 1994, which was closely observed by astronomers worldwide and the Galileo spacecraft. An SwRI-led team detected impact-related X-ray emissions from Jupiter’s northern hemisphere, and prominent scars from the impacts persisted for many months.

“Impacts from asteroids and comets can have a significant impact on the planet’s stratospheric chemistry — 15 years after the impact, comet Shoemaker Levy 9 was still responsible for 95% of the stratospheric water on Jupiter,” Giles said. “Continuing to observe impacts and estimating the overall impact rates is therefore an important element of understanding the planet’s composition.”

The Jet Propulsion Laboratory, a division of Caltech in Pasadena, California, manages the Juno mission for the principal investigator, Dr. Scott J. Bolton, of Southwest Research Institute. Juno is part of NASA’s New Frontiers Program, which is managed at NASA’s Marshall Space Flight Center in Huntsville, Alabama, for the agency’s Science Mission Directorate in Washington. Lockheed Martin Space in Denver built and operates the spacecraft.

The new paper “Detection of a bolide in Jupiter’s atmosphere with Juno UVS” can be found at the American Geophysical Union.