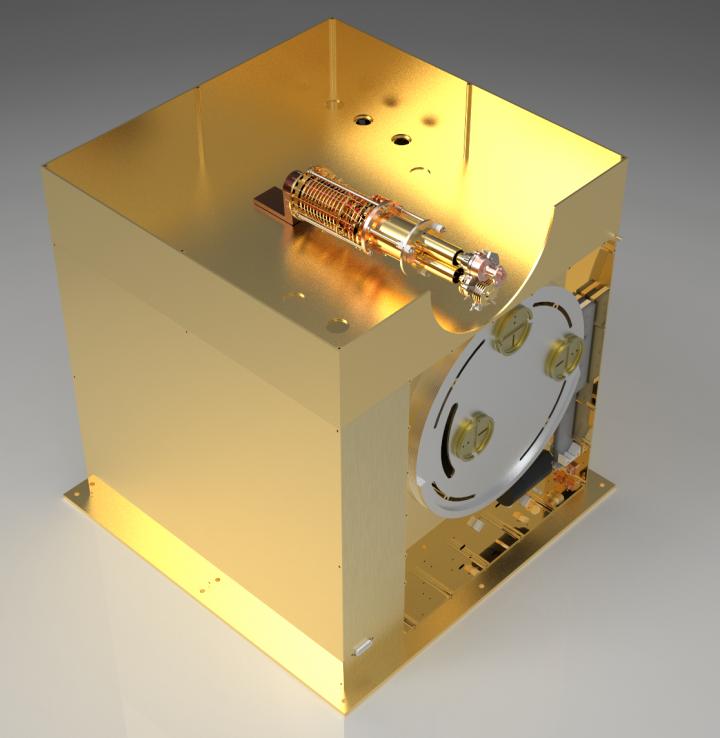 This image shows the Chemistry Organic and Dating Experiment (CODEX), an instrument for in-situ dating of samples, capable of accuracy of ±20 million years. It was created by Southwest Research Institute scientists and is intended for future missions to Mars.
Credit: SwRI
Usage Restrictions: Images/videos may be used by the media and the public for educational and informational purposes only

“The central aim of CODEX is to better understand some of the outstanding questions of solar system chronology, such as the duration of heavy meteoroid bombardment or how long Mars was potentially habitable,” said SwRI Staff Scientist F. Scott Anderson, who is leading development of the instrument.

“In a way, we’ve given CODEX binocular vision in dating,” said Jonathan Levine, associate professor of physics at Colgate University and Anderson’s collaborator on CODEX. “When you can look at something from two different perspectives, you get a deeper view of the object you are examining, whether you are using your eyes or any other tool. In dating planetary specimens, or any rock really, the same holds true.”

Earlier versions of CODEX exploited the natural radioactive decay of rubidium into strontium as our measure of how much time had elapsed since the sample, usually an Earth rock, formed. CODEX continues to use that measurement method but is now also capable of measuring lead isotopes that are produced by the natural decay of uranium in a sample. By comparing two isotopes of lead, an independent estimate of the samples’ age can be obtained.

“Sometimes the two dating systems indicate the same age for a sample, and the agreement gives us confidence that we understand the history of the specimen,” Anderson said. “But sometimes the ages disagree, and we learn that the rock’s history was more nuanced or more complex than we thought.”

Anderson and Levine used CODEX’s two dating methods to measure the ages of six samples: one from Earth, two from Mars, and three from the Moon.

“This suite of rocks showed us the kinds of challenges we are likely to encounter when CODEX eventually gets to fly to either Mars or the Moon, and also shows us where CODEX is most likely to work successfully,” Levine said. “Among three meteorites from the Moon which we studied, we reproduced the known ages in two cases, and found evidence in the third case for a much older age than has been reported before for this meteorite.”

The ages of inner solar system objects are commonly estimated by counting impact craters, with the assumption that objects with more craters have existed for longer periods of time. These estimates are also partially calibrated by the ages of Moon rocks obtained by astronauts in the 1960s. However, in areas not explored by astronauts, the age estimates could be wrong by 100 million to billions of years. Thus, dating more samples is critical to our understanding of the age of the solar system.

“Dating is a challenging process. Traditional techniques are not easily adapted to spaceflight, requiring a sizable laboratory, considerable staff and several months to determine a date,” Anderson said. “CODEX can date samples from these surfaces with an accuracy of ±20-80 million years, more than sufficient to reduce the existing uncertainties of 100-1000 million years, and considerably more accurate than other methods, which have a precision of about ±350 million years.”

There are potentially hundreds of sites on the Moon and Mars that scientists are interested in dating, but sample return missions are expensive and time-consuming. For this reason, CODEX is designed to be compact enough to be incorporated into a spacecraft and could conduct on-site dating of samples.

“This experiment raises the prospect of equipping a future lander mission to the Moon or Mars with a single dating instrument capable of exploiting two complementary isotopic systems,” Anderson said. “This combination would permit consistency checks and afford us a more nuanced understanding of planetary history.”