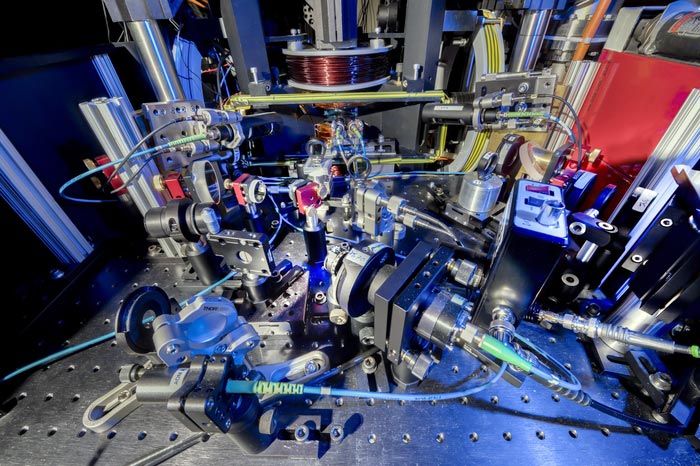 But while these phase transitions are well understood in the case of water, much less is known about the dynamics when a system goes from being a normal fluid to a superfluid, which can flow with zero friction, ie without losing any energy.

A new Swinburne study observing transition of an atomic gas from normal fluid to superfluid provides new insights into the formation of these remarkable states, with a view to future, superfluid-based, quantum technologies, such as ultra-low energy electronics.

Superfluid formation was seen to involve a number of different timescales, associated with different dynamical processes that take place upon crossing the phase boundary.

As a nonequilibrium, dynamic process, phase transitions are challenging to understand from a theoretical perspective, inside these fascinating and potentially useful states of matter.

Such non-equilibrium phenomena in many-body quantum systems involves a complex interplay of correlations spanning vastly different spatio-temporal scales. Access to the full dynamics in most materials can be prohibited by the ultrashort timescales.

Future technologies based on quantum states such as superfluids or superconductors will need to be ‘switched’ (on/off), so understanding how systems evolve after switching answers important basic questions, such as how fast such devices can operate.

Forming a superfluid involves the correlated motion of the many microscopic constituents within a large collection of quantum-mechanical particles.

“Here we use an ultracold gas of strongly interacting fermionic atoms (ie, a Fermi gas), to study how the correlations required to form a superfluid build up after a sudden quench of the interactions. This takes the system out of equilibrium.”

“By measuring the subsequent dynamics as the system returns to equilibrium we can resolve the different timescales involved, for the various correlations to build up. These timescales depend on the corresponding length scales, with short range correlations and pair formation developing quickly, while the overall momentum distribution can take several orders of magnitude longer to reach equilibrium.”

The new experiment showed that:

The contact parameter quantifies the likelihood of finding two atoms in very close proximity to each other, and is strongly enhanced when atoms form pairs.

As well as thanks to the Australian Research Council for funding, the authors acknowledged colleagues Tapio Simula (Swinburne), Meera Parish and Jesper Levinsen (Monash/FLEET) and Matthew Davis (UQ/FLEET) for helpful discussions and feedback.

Researchers often use ultra-cold atoms to study quantum systems, because of the ability to perfectly ‘tune’ atomic interactions.

By increasing the interaction strength between fermionic atoms, experiments can explore the ‘unitary’ limit, where the atomic behaviour is expected to reveal universal features of interacting fermions that could connect our understanding of superconductivity and Bose-Einstein condensation.

“Fundamental discoveries made from experiments such as these can help guide FLEET’s quest to develop dynamically switchable materials in which particles can move without dissipating energy,” explains corresponding author Prof Chris Vale.

Chris Vale leads FLEET’s studies of quantum gases at Swinburne University of Technology, where his lab routinely cools atomic gases to temperatures approaching Absolute Zero. In this temperature range, quantum behaviours that are usually only found at a microscopic level become prominent at  a macroscopic level.

Chris is one of over one-hundred FLEET researchers, all motivated by one grand challenge: to reduce the energy used in information and communication technology (ICT), which already accounts for at least 8% of global electricity use, and is doubling every decade.

FLEET (the ARC Centre of Excellence in Future Low-Energy Electronics Technologies) will develop systems in which electricity flows with minimal resistance and therefore minimal wasted dissipation of energy, and devices in which this ‘dissipationless’ electric current can be switched on and off at will.