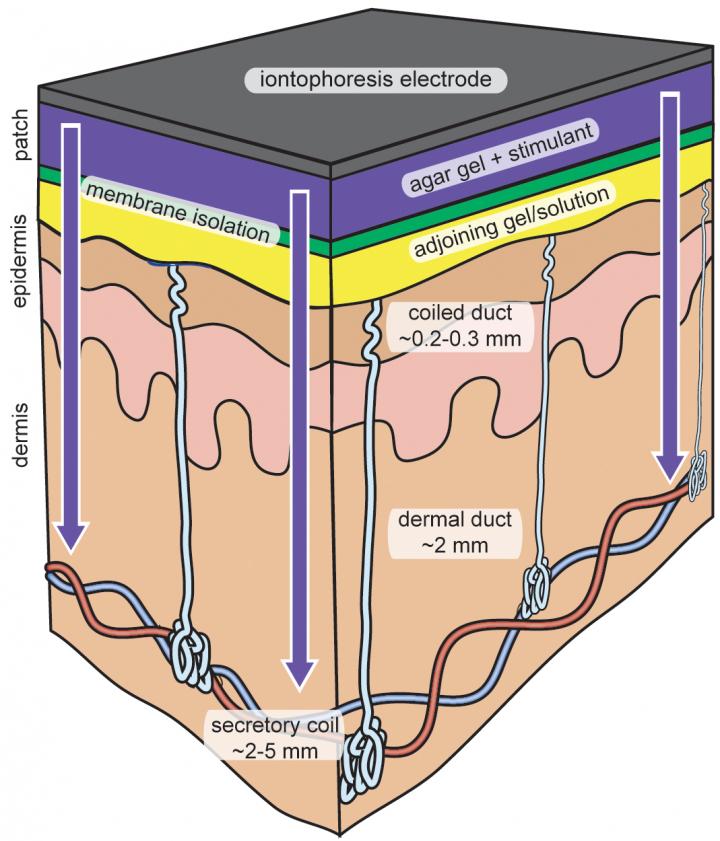 When people sweat, they unknowingly release a wide range of chemicals that can noninvasively inform clinicians on anything from stress hormone levels to glucose. But it's hard for researchers to glean this information — unless you sweat a lot. Emerging wearable devices using stimulant gels have provided a way to induce sweat locally on the body. However, sweat can dilute these gels, which degrades their long-term viability.

An international team of researchers recently developed a new membrane that mitigates both issues that arise from direct dermal contact and sweat dilution for sweat biosensors. As discussed in Biomicrofluidics, by AIP Publishing, the membrane performs hundreds of times better than other methods and holds up to repeated use.

“Everyday use of sweat biosensing is on the horizon, but first we need to work out a few problems, including how to obtain useful samples when patients aren't exerting themselves,” said Phillip Simmers, an author on the paper. “Controlled dosing is very important to the medical community.”

Iontophoretic devices — which would draw on the team's membrane — work by applying a small voltage across the skin to guide a charged drug through the epidermis. Most sweat stimulation devices use a stimulant that is dissolved into a hydrogel at high concentrations to make sure the dosing can be maintained.

While stimulants such as carbachol are useful because the body slowly metabolizes them, they cannot specifically target sweat glands and pose potential risk if an additional stimulant enters the body. When the stimulant activates sweat production, the resulting mélange of hydrogel and sweat not only makes it difficult for the stimulant to reach the skin, but also for the biosensor to accurately read the sweat.

“One of the biggest challenges was that when we sweat, we're actively losing analytes to the gel, which is an issue that hasn't been addressed,” Simmers said.

Simmers and his team first constructed an in vitro model to determine which commercially available filtration membranes were best suited for limiting the passive diffusion of carbachol. They found that the best membranes had nanoscale pores and retained more than 90 percent of their initial stimulant concentration after 24 hours, while allowing only a minimal amount of sweat to pass through.

The group then ported this technology to dime-sized adhesive patches and tested them on patients. Using bromophenol blue dye and silicone oil that changes color in the presence of sweat, they were able to confirm that the nanoscale pores identified earlier during their in vitro experiments could still deliver controlled dosing that induced the human sweat response, proving that the membrane was effectively isolating the sweat from the stimulant.

Next up, the group hopes to incorporate their findings into a wearable biosensing prototype that they have already developed. Simmers said he hopes the paper's findings will also stoke interest in how to better produce membrane materials for such devices.