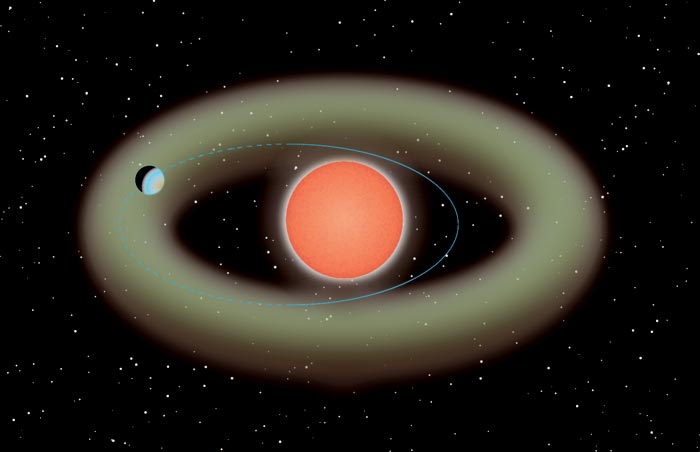 A super-Earth planet has been found near the habitable zone of a red dwarf star only 37 light-years from the Earth. This is the first discovery by a new instrument on the Subaru Telescope and offers a chance to investigate the possibility of life on planets around nearby stars. With such a successful first result, we can expect that the Subaru Telescope will discover more, potentially even better, candidates for habitable planets around red dwarfs.

Red dwarfs, stars smaller than the Sun, account for three-quarters of the stars in the Milky Way Galaxy, and are abundant in the neighborhood around the Sun. As such, they are important targets in the search for nearby extra-solar planets and extraterrestrial life. But red dwarfs are cool and don’t emit much visible light compared to other types of stars, making it difficult to study them.

In the infrared wavelengths red dwarfs are brighter. So the Astrobiology Center in Japan developed an infrared observational instrument mounted on the Subaru Telescope to search for signs of planets around red dwarf stars. The instrument is called IRD for Infrared Doppler, the observational method used in this search.

The first fruits of this search are signs of a super-Earth four times the mass of the Earth circling the star Ross 508, located 37 light-years away in the constellation Serpens. This planet, Ross 508 b, has a year of only 11 Earth-days, and lies at the inner edge of the habitable zone around its host star. Interestingly, there are indications that the orbit is elliptical, which would mean that for part of the orbit the planet would be in the habitable zone, the region where conditions would be right for liquid water to exist on the surface of the planet. Whether or not there is actually water or life are questions of further study.

To have the very first planet discovered by this new method be so tantalizingly close to the habitable zone seems too good to be true and bodes well for future discoveries. Bun’ei Sato, a Professor at the Tokyo Institute of Technology and the principal investigator in this search comments, “It has been 14 years since the start of IRD’s development. We have continued our development and research with the hope of finding a planet exactly like Ross 508 b.”

These results appeared as Harakawa et al. “A Super-Earth Orbiting Near the Inner Edge of the Habitable Zone around the M4.5-dwarf Ross 508” in Publication of the Astronomical Society of Japan on June 30, 2022.

Journal: Publications of the Astronomical Society of Japan
DOI: 10.1093/pasj/psac044
Method of Research: Observational study
Subject of Research: Not applicable
Article Title: A super-Earth orbiting near the inner edge of the habitable zone around the M4.5 dwarf Ross 508
Article Publication Date: 30-Jun-2022