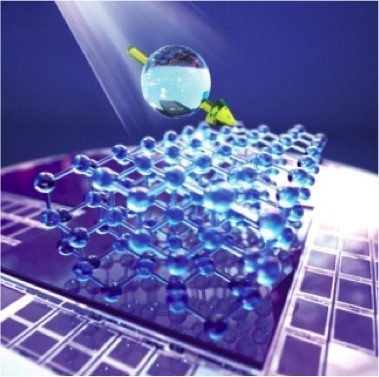 Peter Allen Light polarizes silicon nuclear spins within a silicon carbide chip. This image portrays the nuclear spin of one of the atoms shown in the full crystal lattice below.

Now researchers at the University of Chicago’s Institute for Molecular Engineering (IME) have made a crucial step toward nuclear spintronic technologies. They have gotten nuclear spins to line themselves up in a consistent, controllable way, and they have done it using a high-performance material that is practical, convenient, and inexpensive.

“Our results could lead to new technologies like ultra-sensitive magnetic resonance imaging, nuclear gyroscopes, and even computers that harness quantum mechanical effects,” said Abram Falk, the lead author of the report on the research, which was featured as the cover article of the June 17 issue of Physical Review Letters. Falk and colleagues in David Awschalom’s IME research group invented a new technique that uses infrared light to align spins. And they did so using silicon carbide (SiC), an industrially important semiconductor.

Nuclear spins tend to be randomly oriented. Aligning them in a controllable fashion is usually a complicated and only marginally successful proposition. The reason, explains Paul Klimov, a co-author of the paper, is that “the magnetic moment of each nucleus is tiny, roughly 1,000 times smaller than that of an electron.”

This small magnetic moment means that little thermal kicks from surrounding atoms or electrons can easily randomize the direction of the nuclear spins. Extreme experimental conditions such as high magnetic fields and cryogenic temperatures
(-238 degrees Fahrenehit and below) are usually required to get even a small number of spins to line up. In magnetic resonance imaging (MRI), for example, only one to 10 out of a million nuclear spins can be aligned and seen in the image, even with a high magnetic field applied.

Using their new technique, Awschalom and his associates aligned more than 99 percent of spins in certain nuclei in silicon carbide (SiC). Equally important, the technique works at room temperature — no cryogenics or intense magnetic fields needed. Instead, the research team used light to “cool” the nuclei.

While nuclei do not themselves interact with light, certain imperfections, or “color-centers,” in the SiC crystals do. The electron spins in these color centers can be readily optically cooled and aligned, and this alignment can be transferred to nearby nuclei. Had the group tried to achieve the same degree of spin alignment without optical cooling they would have had to chill the SiC chip physically to just five millionths of a degree above absolute zero (-459.6 degrees Fahrenheit).

Getting spins to align in room-temperature silicon carbide brings practical spintronic devices a significant step closer, said Awschalom, the Liew Family Professor in Spintronics and Quantum Information. The material is already an important semiconductor in the high-power electronics and opto-electronics industries. Sophisticated growth and processing capabilities are already mature. So prototypes of nuclear spintronic devices that exploit the IME researchers’ technique may be developed in the near future. Said Awschalom: “Wafer-scale quantum technologies that harness nuclear spins as subatomic elements may appear more quickly than we anticipated.” —Carla Reiter