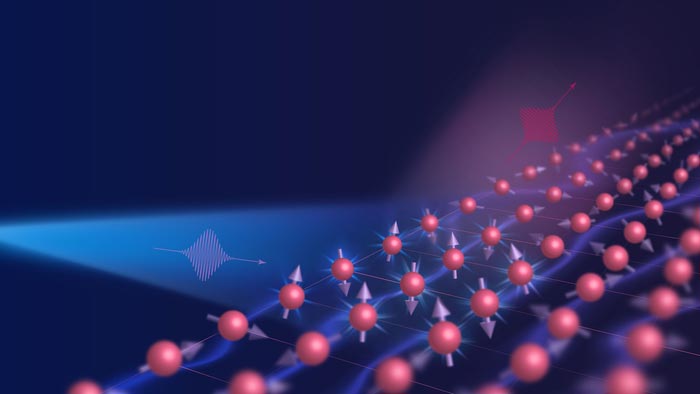 Electronic nematicity, thought to be an ingredient in high temperature superconductivity, is primarily spin driven in FeSe finds a study in Nature Physics.

Researchers from PSI’s Spectroscopy of Quantum Materials group together with scientists from Beijing Normal University have solved a puzzle at the forefront of research into iron-based superconductors: the origin of FeSe’s electronic nematicity. Using Resonant inelastic X-ray scattering (RIXS) at the Swiss Light Source (SLS), they discovered that, surprisingly, this electronic phenomenon is primarily spin driven. Electronic nematicity is believed to be an important ingredient in high-temperature superconductivity, but whether it helps or hinders it is still unknown. Their findings are published in Nature Physics.

Near PSI, where the Swiss forest is ever present in people’s lives, you often see log piles: incredibly neat log piles. Wedge shaped logs for firewood are stacked carefully lengthways but with little thought to their rotation. When particles in a material spontaneously line up, like the logs in these log piles, such that they break rotational symmetry but preserve translational symmetry, a material is said to be in a nematic state. In a liquid crystal, this means that the rod shaped molecules are able to flow like a liquid in the direction of their alignment, but not in other directions. Electronic nematicity occurs when the electron orbitals in a material align in this way. Typically, this electronic nematicity manifests itself as anisotropic electronic properties: for example, resistivity or conductivity exhibiting vastly different magnitudes when measured along different axes.

FeSe enters its superconducting phase below a critical temperature (Tc) of 9 K but tantalisingly boasts a tunable Tc, meaning that this temperature can be raised by applying pressure to or doping the material. The quasi-2D layered material possesses an extended electronic nematic phase, which appears below approximately 90 K. Curiously, this electronic nematicity appears without the long-range magnetic order that it would typically go hand in hand with, leading to lively debate surrounding its origins: namely, whether these are driven by orbital- or spin-degrees of freedom. The absence of long range magnetic order in FeSe gives the opportunity to have a clearer view on the electronic nematicity and its interplay with superconductivity. As a result many researchers feel that FeSe may hold the key to understanding the puzzle of electronic nematicity across the family of iron based superconductors.

To determine the origin of FeSe’s electronic nematicity, scientists from PSI’s Spectroscopy of Quantum Materials Group turned to the technique of resonant inelastic X-ray scattering (RIXS) at the ADRESS beamline of the Swiss Light Source (SLS). Combining the principles of x-ray absorption and emission spectroscopies, this technique is a highly efficient tool to explore the magnetic or spin excitations of a material.

“At PSI, we have one of the most advanced set-ups for RIXS in the world. Among the first to push this technique 15 years ago, we have now established a very well developed facility for this type of experiments,” explains Thorsten Schmitt, who led the study together with Xingye Lu from Beijing Normal University. “In particular, the characteristics of the synchrotron radiation due to the SLS ring design are ideal for the soft x-ray range that these experiments were performed in.”

To study the spin anisotropies of FeSe using RIXS, the scientists first needed to overcome a practical hurdle. In order to measure the anisotropic nematic behaviour, the sample first needed to be ‘detwinned’. Twinning occurs when crystals in stacked layers are aligned with the same probability along arbitrary directions, thus concealing any information about anisotropic behaviour. Detwinning is a common crystallographic sample preparation technique, where typically a pressure is applied to the sample that causes the crystals to align along structural directions.

For FeSe, this doesn’t work. Apply this pressure to FeSe and the soft material simply deforms – or breaks. Therefore, the team used a method of indirect detwinning, whereby FeSe is glued to a material that can be detwinned: barium iron arsenide (BaFe2As2). “When we apply a uniaxial-pressure to BaFe2As2, this generates a strain of around 0.36%, which is  just enough to detwin FeSe at the same time”, explains Xingye Lu, who had previously demonstrated its feasibility together with Tong Chen and Pengcheng Dai from Rice University for studies of FeSe with inelastic neutron scattering.

Inelastic neutron scattering experiments had revealed spin-anisotropies in FeSe at low energy; but measurement of high-energy spin excitations, were essential to link these spin fluctuations to the electronic nematicity. Measuring spin excitations at an energy scale of about 200 meV – well above the energy separation between the orbital energy levels – would enable orbital degrees of freedom to be ruled out as a source of the electronic nematicity. With detwinning successfully accomplished, the researchers could probe the crucial high-energy spin excitations of FeSe, and also BaFe2As2, using RIXS.

The researchers first measured detwinned BaFe2As2, which has a well-characterised, anisotropic spin-structure and long-range magnetic order and used this as a reference. Measurements of the spin excitation response along the two orthogonal directions showed a clear asymmetry: the manifestation of the nematicity.

The team then performed the same experiment in detwinned FeSe. Despite the lack of magnetic ordering, they observed a very strong spin anisotropy with respect to the two axes. “Extraordinarily, we could reveal a spin anisotropy comparable – if not greater – to that in the already highly anisotropic BaFe2As2,” says Xingye Lu. “This spin anisotropy decreases with increasing temperature, and disappears around the nematic transition temperature – the temperature at which the material ceases to be in an electronic nematic state.”

The origin of electronic nematicity in FeSe: towards a better understanding of electronic behaviour in iron-based superconductors

The energy scale of the spin excitations of around 200 meV, which is much higher than the separation between the orbital levels, demonstrate that the electronic nematicity in FeSe is primarily spin driven. “This was a big surprise,” explains Thorsten Schmitt. “We could now make the connection between electronic nematicity, manifesting as anisotropic resistivity, with the presence of nematicity in the spin excitations.”

The work at PSI was supported by the Swiss National Science Foundation and the Sinergia network “Mott Physics Beyond the Heisenberg Model”.

PSI provides image and/or video material free of charge for media coverage of the content of the above text. Use of this material for other purposes is not permitted. This also includes the transfer of the image and video material into databases as well as sale by third parties.

The Paul Scherrer Institute PSI develops, builds and operates large, complex research facilities and makes them available to the national and international research community. The institute’s own key research priorities are in the fields of matter and materials, energy and environment and human health. PSI is committed to the training of future generations. Therefore about one quarter of our staff are post-docs, post-graduates or apprentices. Altogether PSI employs 2100 people, thus being the largest research institute in Switzerland. The annual budget amounts to approximately CHF 400 million. PSI is part of the ETH Domain, with the other members being the two Swiss Federal Institutes of Technology, ETH Zurich and EPFL Lausanne, as well as Eawag (Swiss Federal Institute of Aquatic Science and Technology), Empa (Swiss Federal Laboratories for Materials Science and Technology) and WSL (Swiss Federal Institute for Forest, Snow and Landscape Research).