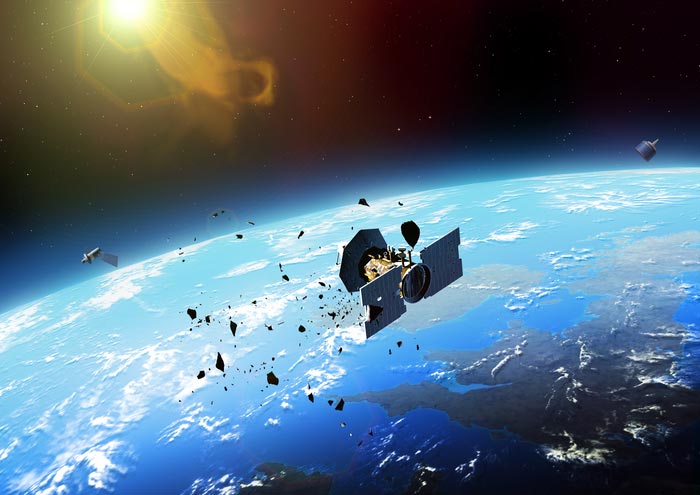 Illustration showing some of the hazards that the new Centre for Space Domain Awareness will investigate. Credit/copyright - University of Warwick/Mark Garlick

New ways of tackling the threat that space junk in our skies poses are being explored by University of Warwick scientists, as they pioneer new research that could help the UK fulfil its ambition to become a responsible spacefaring nation.

Scientists at a new Centre for Space Domain Awareness are to focus attention on threats to the technology filling the skies above our heads in anticipation of a huge expansion in the number of satellites that provide vital services such as communications, navigation and Earth observation.

The University of Warwick is launching the Centre for Space Domain Awareness to create a critical mass of research that tackles the growing threats to technology in Earth orbit. From the space junk that could collide with orbiting satellites, to the solar winds that could interfere with their electronics, the researchers at the new Centre will pioneer new work to understand and characterise the near-Earth environment to support scientific, commercial, governmental and military applications.

Supported by the Defence Science and Technology Laboratory (Dstl) and UKSA, the new Centre for Space Domain Awareness will be the first research centre in the UK dedicated to investigating the sustainable use of the near-Earth environment. The Centre is launched today (8 September) at the annual meeting of GNOSIS (The Global Network on Sustainability in Space), a Science and Technology Facilities Council (STFC) network of scientists and representatives from industry that aims to raise awareness of the problem of space debris and of space sustainability.

Professor Don Pollacco, Director of the new Centre and Professor in the University of Warwick Department of Physics, said: “The near-Earth environment is becoming increasing important, and yet we don’t know that much about what’s really going on there. At the Centre for Space Domain Awareness, we’ll be concentrating on studying the solar wind and its impact on satellites and the Earth’s atmosphere, and on the debris situation in all orbital regimes and its impact on spacecraft.

“Both those areas have become important, especially in terms of the UK’s ambition to become a spacefaring country, and the responsibility that entails.”

Since the start of space exploration around 6,000 satellites have been launched into orbit and that number is expected to increase massively, particularly with plans from some organisations for ‘mega-constellations’ of thousands of satellites.

Most of these are found in low-Earth orbit (LEO), less than ~1200km, as these orbits have become routinely (and relatively cheaply) accessible from the ground and are the ideal distance to obtain short latency for communications and high-resolution imagery.

While our satellites are key to the space-for-Earth industries such as telecommunications and internet infrastructure (including banking) and Earth Observation, the near-Earth environment has become littered with debris from multiple space launches, as well as decommissioned spacecraft that have been left to burn up in the atmosphere. The scientists at the University of Warwick have been working to develop new ways to search for debris in orbit through projects such as DebrisWatch, as well as investigating how the solar wind, given off by our Sun, can affect the operations of spacecraft.

Professor Pollacco added: “The bulk of modern society is dependent on space. But we now have a space traffic issue. Sooner or later, this is all going to become a big issue. From our point of view, the idea is to get onto it a lot earlier.

“In terms of debris, we don’t know about the distribution with orbital height but we know that there are some orbits that have significant debris in. The material is moving quite fast, and its momentum can be significant. Something very small can take out a whole spacecraft.

“We also want to study the impact of charged build-up from the solar wind on spacecraft electronics.”

Jacob Geer, Head of Space Surveillance and Tracking at the UK Space Agency, said: “Without satellites, we wouldn’t be able to connect with our families at the touch of a button or check the weather before leaving the house. As we become increasingly reliant on these services, the threat of space debris could cause havoc for our day-to-day activities.

“This centre will support the UK’s growing need to track objects in space and shows how active our universities are in tackling space debris. We should see many civil and military benefits from this research as we look at ways to reduce and tackle the increasing congestion in space.”

Jason Green, STFC Associate Director External Innovation, said: “Using research-based expertise to solve some of society’s most pressing problems is the main aim of the STFC networks, such as GNOSIS.

“The GNOSIS network has provided the catalyst for this new centre, which will no doubt enhance the UK’s expertise in this area.

“The centre will utilise STFC’s experience in applying techniques from our research portfolio to tackle real-world challenges, along with the commercial connections developed within the GNOSIS network.”

Dr William Feline, Space Situational Awareness Project Technical Authority at Dstl, said: “Dstl has been working with Professor Pollacco and his team for a number of years in tackling the challenge of understanding how best to monitor satellites and debris in Earth orbit.  The unique capabilities that they have brought to bear on the problem, including their world-class observatory facilities on La Palma in the Canary Islands, have rapidly accelerated the UK’s capabilities in this area.  As a result, Dstl recently sponsored a  Fellowship in Space Situational Awareness at the University of Warwick.  I’m really pleased to witness the growth in UK expertise which has helped lead to the creation of this new Centre  and I’m looking forward to working with them on the challenges faced by the UK and the world.”

Katherine Courtney, Chair of the GNOSIS Board, said: “The volume of space traffic is increasing at a pace unimaginable just a few years ago. Nations and companies all over the world have growing ambitions for new space missions. The risks posed to those spacecraft from space weather, congestion and debris are a global concern.

“The Global Network on Sustainability in Space (GNOSIS) brings together scientists and industry to solve problems of how to safeguard the sustainable use of space for all. This new Centre for Space Domain Awareness being announced today will help accelerate progress in understanding the nature and scale of the problems and will generate fresh insights into how to combat those. We are pleased GNOSIS has been able to play a role in the Centre’s formation and look forward to its future success.”

Download an illustration showing some of the hazards that the new Centre for Space Domain Awareness will investigate. Image is free for use if used in direct connection with this story but image copyright and credit must be University of Warwick/Mark Garlick: