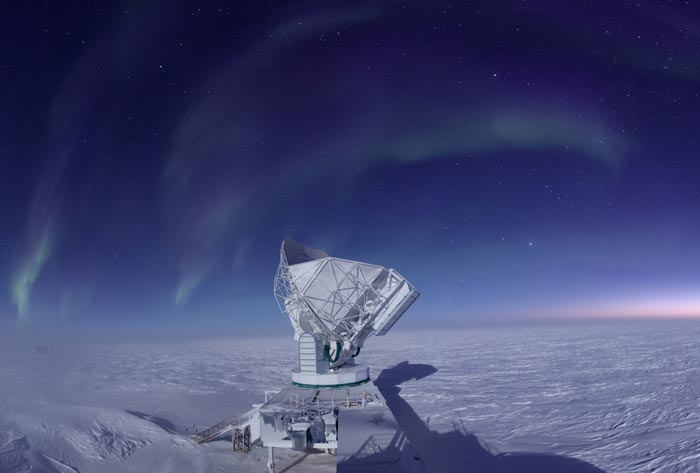 Down at the South Pole, where temperatures drop below negative 100 degrees Fahrenheit and darkness blankets the land for six months at a time, the South Pole Telescope (SPT) searches the skies for answers to the mysteries of our universe.

This mighty scavenger is about to get a major upgrade — a new camera that will help scientists further understand neutrinos, the ghost-like particles without electric charge that rarely interact with matter.

The 10-meter SPT is the largest telescope ever to make its way to the South Pole. It stands atop a two-mile thick plateau of ice, mapping the cosmic microwave background (CMB), the light left over from the big bang. Astrophysicists use these observations to understand the composition and evolution of the universe, all the way back to the first fraction of a second after the big bang, when scientists believe the universe quickly expanded during a period called inflation.

One of the goals of the SPT is to determine the masses of the neutrinos, which were produced in great abundance soon after the big bang. Though nearly massless, because neutrinos exist in huge numbers, they contribute to the total mass of the universe and affect its expansion. By mapping out the mass density of the universe through measurements of CMB lensing, the bending of light caused by immense objects such as large galaxies, astrophysicists are trying to determine the masses of these elusive particles.

To conduct these extremely precise measurements, scientists are installing a bigger, more sensitive camera on the telescope. This new camera, SPT-3G, will be four times heavier and have a factor of about 10 more detectors than the current camera. Its higher level of sensitivity will allow researchers to make extremely precise measurements of the CMB that will hopefully make it possible to cosmologically detect neutrino mass.

“In the next several years, we should be able to get to the sensitivity level where we can measure the number of neutrinos and derive their mass, which will tell us how they contribute to the overall density of the universe,” explained Bradford Benson, the head of the CMB Group at the Department of Energy's Fermilab. “This measurement will also enable even more sensitive constraints on inflation and has the potential to measure the energy scale of the associated physics that caused it.”

SPT-3G is being completed by a collaboration of scientists spanning the DOE national laboratories, including Fermilab and Argonne, and universities including the University of Chicago and University of California, Berkeley. The national laboratories provide the resources needed for the bigger camera and larger detector array while the universities bring years of expertise in CMB research.

“The national labs are getting involved because we need to scale up our infrastructure to support the big experiments the field needs for the next generation of science goals,” Benson said. Fermilab's main role is the initial construction and assembly of the camera, as well as its integration with the detectors. This upgrade is being supported mainly by the Department of Energy and the National Science Foundation, which also supports the operations of the experiment at the South Pole.

Once the camera is complete, scientists will bring it to the South Pole, where conditions are optimal for these experiments. The extreme cold prevents the air from holding much water vapor, which can absorb microwave signals, and the sun, another source of microwaves, does not rise between March and September.

The South Pole is accessible only for about three months during the year, starting in November. This fall, about 20 to 30 scientists will head down to the South Pole to assemble the camera on the telescope and make sure everything works before leaving in mid-February. Once installed, scientists will use it to observe the sky over four years.

“For every project I've worked on, it's that beginning — when everyone is so excited not knowing what we're going to find, then seeing things you've been dreaming about start to show up on the computer screen in front of you — that I find really exciting,” said University of Chicago's John Carlstrom, the principal investigator for the SPT-3G project.