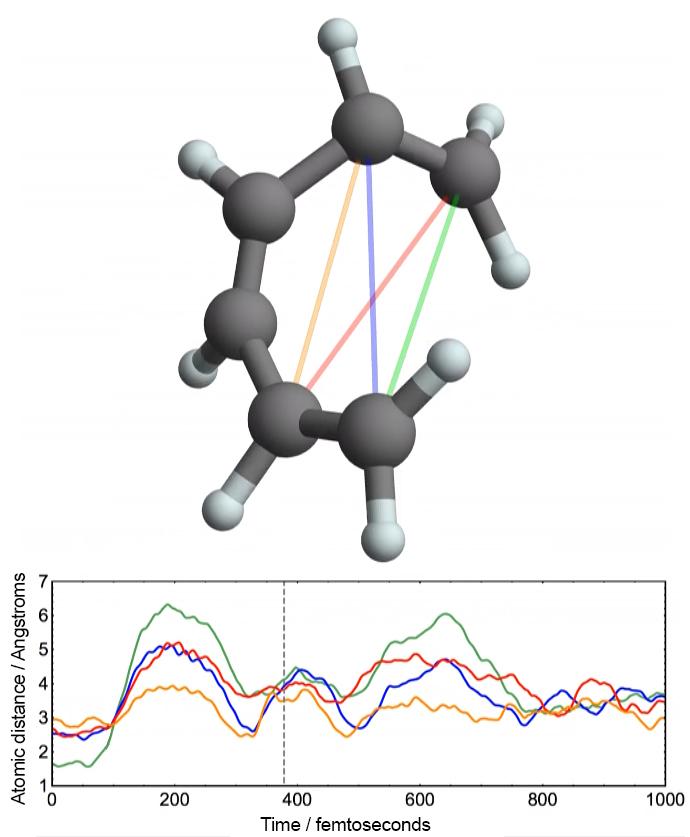 Researchers created the first atomic-resolution movie of the ring-opening reaction of 1,3-cyclohexadiene (CHD) with an 'electron camera' called UED. Bottom: The UED electron beam accurately measures the distances between pairs of atoms in the CHD molecule as the reaction proceeds. The distance between each pair is represented by a colored line in the graph. Variations in the distances as the molecule changes shape represent the molecular movie. Top: Visualization of the molecular structure corresponding to the distance distribution measured at about 380 femtoseconds into the reaction (dashed line at bottom). Credit: David Sanchez/Stanford University

With an extremely fast “electron camera” at the Department of Energy's SLAC National Accelerator Laboratory, researchers have made the first high-definition “movie” of ring-shaped molecules breaking open in response to light. The results could further our understanding of similar reactions with vital roles in chemistry, such as the production of vitamin D in our bodies.

A previous molecular movie of the same reaction, produced with SLAC's Linac Coherent Light Source (LCLS) X-ray laser, for the first time recorded the large structural changes during the reaction. Now, making use of the lab's ultrafast electron diffraction (UED) instrument, these new results provide high-resolution details – showing, for instance, how a bond in the ring breaks and atoms jiggle around for extended periods of time.

“The details of this ring-opening reaction have now been settled,” said Thomas Wolf, a scientist at the Stanford Pulse Institute of SLAC and Stanford University and leader of the research team. “The fact that we can now directly measure changes in bond distances during chemical reactions allows us to ask new questions about fundamental processes stimulated by light.”

SLAC scientist Mike Minitti, who was involved in both studies, said, “The results demonstrate how our unique instruments for studying ultrafast processes complement each other. Where LCLS excels in capturing snapshots with extremely fast shutter speeds of only a few femtoseconds, or millionths of a billionth of a second, UED cranks up the spatial resolution of these snapshots. This is a great result, and the studies validate one another's findings, which is important when making use of entirely new measurement tools.”

LCLS Director Mike Dunne said, “We're now making SLAC's UED instrument available to the broad scientific community, in addition to enhancing the extraordinary capabilities of LCLS by doubling its energy reach and transforming its repetition rate. The combination of both tools uniquely positions us to enable the best possible studies of fundamental processes on ultra-small and ultrafast scales.”

The team reported their results today in Nature Chemistry.

This particular reaction has been studied many times before: When a ring-shaped molecule called 1,3-cyclohexadiene (CHD) absorbs light, a bond breaks and the molecule unfolds to form the almost linear molecule known as 1,3,5-hexatriene (HT). The process is a textbook example of ring-opening reactions and serves as a simplified model for studying light-driven processes during vitamin D synthesis.

In 2015, researchers studied the reaction with LCLS, which resulted in the first detailed molecular movie of its kind and revealed how the molecule changed from a ring to a cigar-like shape after it was struck by a laser flash. The snapshots, which initially had limited spatial resolution, were brought further into focus through computer simulations.

The new study used UED – a technique in which researchers send an electron beam with high energy, measured in millions of electronvolts (MeV), through a sample – to precisely measure distances between pairs of atoms. Taking snapshots of these distances at different intervals after an initial laser flash and tracking how they change allows scientists to create a stop-motion movie of the light-induced structural changes in the sample.

The electron beam also produces strong signals for very dilute samples, such as the CHD gas used in the study, said SLAC scientist Xijie Wang, director of the MeV-UED instrument. “This allowed us to follow the ring-opening reaction over much longer periods of time than before.”

The new data revealed several surprising details about the reaction.

They showed that the movements of the atoms accelerated as the CHD ring broke, helping the molecules rid themselves of excess energy and accelerating their transition to the stretched-out HT form.

The movie also captured how the two ends of the HT molecule jiggled around as the molecules became more and more linear. These rotational motions went on for at least a picosecond, or a trillionth of a second.

“I would have never thought these motions would last that long,” Wolf said. “It demonstrates that the reaction doesn't end with the ring opening itself and that there is much more long-lasting motion in light-induced processes than previously thought.”

A method with potential

The scientists also used their experimental data to validate a newly developed computational approach for including the motions of atomic nuclei in simulations of chemical processes.

“UED provided us with data that have the high spatial resolution needed to test these methods,” said Stanford chemistry professor and PULSE researcher Todd Martinez, whose group led the computational analysis. “This paper is the most direct test of our methods, and our results are in excellent agreement with the experiment.”

In addition to advancing the predictive power of computer simulations, the results will help deepen our understanding of life's fundamental chemical reactions, Wolf said: “We're very hopeful our method will pave the way for studies of more complex molecules that are even closer to the ones used in life processes.”

SLAC National Accelerator Laboratory is supported by the Office of Science of the U.S. Department of Energy. The Office of Science is the single largest supporter of basic research in the physical sciences in the United States, and is working to address some of the most pressing challenges of our time. For more information, please visit science.energy.gov.