Home / Physics and Astronomy / Singularities in the Navier-Stokes equations?
18.11.2020

Singularities in the Navier-Stokes equations? 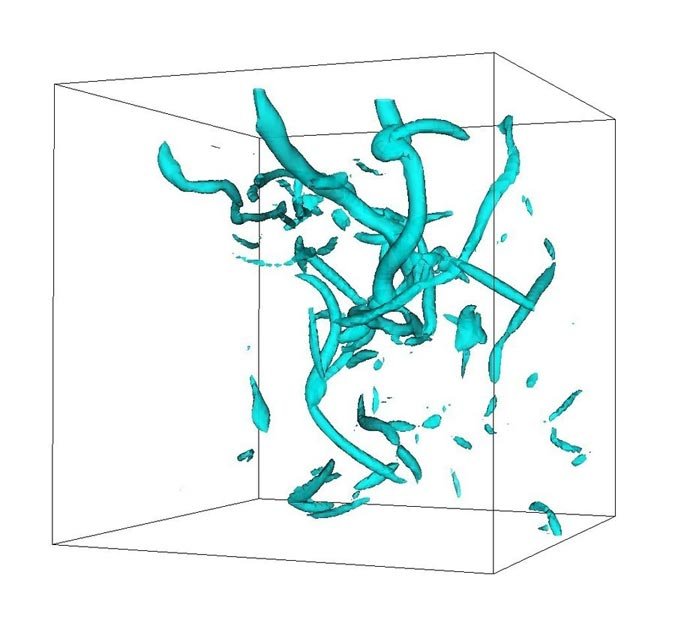 Regions of intense rotational motions in turbulent flows are arranged in tube-like structures, which tend to attenuate their own rotation rate and therefore oppose the formation of singularities.
© MPIDS

In their new study now published in Nature Communications, researchers at the Max Planck Institute for Dynamics and Self-Organization have deciphered a novel regularization mechanism encoded in the Navier-Stokes equations that offers a new direction in the exclusion of singularities.

From stirring sugar in coffee to global weather patterns – turbulent currents constantly shape the life around us. Mathematically, they are described by the Navier-Stokes equations, as now known for almost two centuries. Despite the widespread use of these equations to describe turbulent flows in the natural and engineering sciences, it remains unclear whether they represent a well-posed problem, i.e. whether the solutions of the Navier-Stokes equations remain smooth at all times or whether they can develop singularities (which would make them unphysical when describing real flows).

This puzzle has eluded researchers despite decades of intensive efforts and is listed by the Clay Mathematics Institute as one of the outstanding Millennium Prize problems. Researchers at the Max Planck Institute for Dynamics and Self-Organization (MPIDS) recently published their new study in Nature Communications, in which they have uncovered a regularization mechanism enabling a new method to exclude singularities in the Navier-Stokes equations.

The Navier-Stokes equations mathematically express the conservation of mass and momentum for the motion of fluids such as air and water. If the fluid is moved sufficiently fast, the motion becomes choppy and unpredictable, i.e. turbulent. In this state, fluid motion is characterized by the spontaneous formation of very intense vortices (eddies) in which the fluid rotates rapidly. This behavior is a consequence of the non-linearity of the Navier-Stokes equations, which couples the rotation rate to the local tendency of the flow to distort and stretch the fluid, thereby allowing the rotation rate to increase.

As the rotation becomes more intense, internal friction (viscosity) sets in, which eventually dissipates the motion into heat. Previous studies have shown that the Navier-Stokes equations can generally describe this picture correctly. However, a formal mathematical proof that viscosity always prevents the occurrence of an infinite rate of rotation in vortices (a singularity) is difficult to provide. If such a singularity were to exist, it would seriously challenge the predictions based on the Navier-Stokes equations and thus force us to rethink one of the cornerstones of physics and engineering.

A major difficulty in understanding the nonlinear mechanisms in the Navier-Stokes equations results from their non-locality, which essentially means that all degrees of freedom of the flow are coupled together. In other words, the fluid motion at any point in the flow is influenced by the flow properties at all other points, so that one is forced to analyze the flow as a whole. Non-locality is an outstanding theoretical difficulty that has hampered fundamental progress in turbulence for decades.

A research team at the MPIDS has now developed a novel technique to get a grip on this non-locality. The stretching motion in the fluid can be expressed by means of an integral over the entire domain in the form of the rotation rate. This integral can then be broken down into two parts: a local contribution in the vicinity of the vortices and the remaining contribution resulting from the rest of the domain.

“A crucial step in carrying out this decomposition was to develop an efficient method that would allow us to evaluate these contributions numerically, since they still cannot be evaluated analytically,” says Dr. Dhawal Buaria, the lead author of the manuscript, now a research scientist at New York University. “Using our decomposition methods to analyze highly resolved solutions of the Navier-Stokes equations, we were able to show that the non-linearity in the vicinity of the whirls surprisingly tends to suppress the rotation rate of the fluid, similar to viscosity, possibly ruling out singularities”, Dr. Dhawal Buaria further added.

The unexpected results of this work suggest that the nonlinear reinforcement of the fluid rotation rate seems to be significantly weaker than what would be required for a singular solution and that it could help to solve the notorious regularity problem of the Navier-Stokes equations. Prof. Alain Pumir, External Scientific Member of the MPIDS and Research Director at ENS Lyon adds: “Our analysis indicates that singularities in the Navier-Stokes equations are unlikely to occur in turbulent flows, even at the highest intensities. This gives a strong hint that the Navier Stokes equation are, in fact, well founded.”

The basic understanding of the Navier-Stokes equations, which still needs to be refined, could provide important insights into the structure of turbulent flows and help to develop more accurate turbulence models. “Many fascinating phenomena in the atmosphere, which are decisive for the dynamics and development of the climate, are based on the properties of turbulence. For this reason, a detailed understanding of turbulent flows is now more essential than ever,” concludes Prof. Eberhard Bodenschatz, Director at the MPIDS.