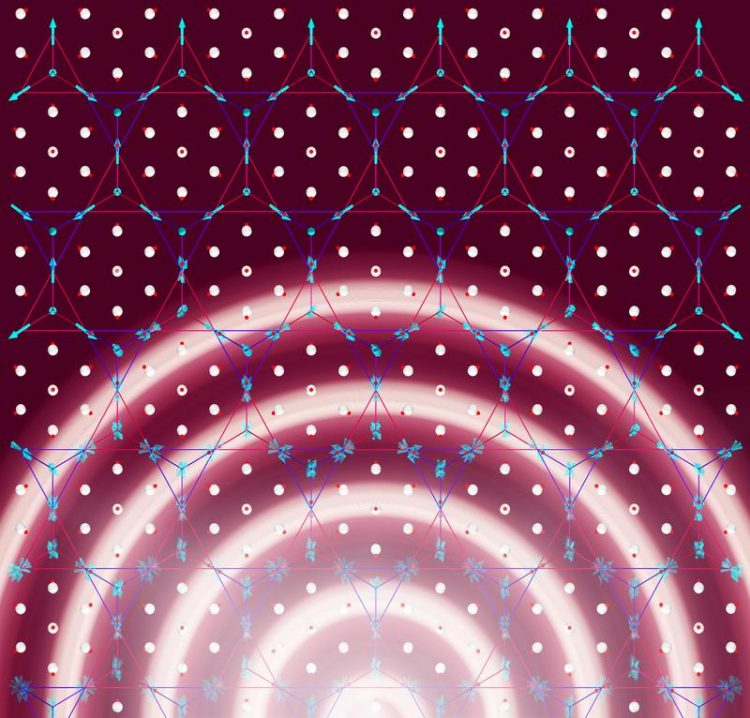 All known elementary particles can be sorted into two categories: bosons and fermions. Bosons carry forces, like the magnetic force or gravity, while fermions are the matter particles, like electrons. Theoretically it was predicted that fermions themselves can come in three species, named after the physicists Dirac, Weyl, and Majorana.

Electrons in free space are Dirac fermions, but in solids they can change their nature. In the atomically thin carbon material graphene they become massless Dirac fermions. In other recently discovered and manufactured materials, they can also become Weyl and Majorana fermions, which makes such materials interesting for future technologies such as topological quantum computers and other novel electronic devices.

In combination with a wave of bosons, namely photons in a laser, fermions can be transformed from one type to another, as proposed by MPSD theorists in 2016 (see ref. 1) below). Now a new study led by PhD student Gabriel Topp in the Emmy Noether group of Michael Sentef suggests that electron spins can be manipulated by short light pulses to create a magnetic version of Weyl fermions from a magnetic insulator.

Based on a prior study led by MPSD postdoctoral researcher Nicolas Tancogne-Déjean and Theory Director Angel Rubio (see ref. 2 below), the scientists used the idea of laser-controlled electron-electron repulsion to suppress magnetism in a pyrochlore iridate material where electron spins are positioned on a lattice of tetrahedra.

On this lattice, electron spins, like little compass needles, point all-in to the center of the tetrahedron and all-out in the neighboring one. This all-in, all-out combination together with the length of the compass needles leads to insulating behavior in the material without light stimulation.

However, modern computer simulations on large computing clusters revealed that, when a short light pulse hits the material, the needles start to rotate in such a way that, on average, they look like shorter needles with less strong magnetic ordering. Done in just the right way, this reduction of magnetism leads to the material becoming semi-metallic with Weyl fermions emerging as the new carriers of electricity in it.

„This is a really nice step forward in learning how light can manipulate materials on ultrashort time scales,“ says Michael Sentef. And Gabriel Topp adds: „We were surprised by the fact that even a too strong laser pulse that should lead to a complete suppression of magnetism and a standard metal without Weyl fermions could lead to a Weyl state.

This is because on very short time scales the material does not have enough time to find a thermal equilibrium. When everything is shaking back and forth, it takes some time until the extra energy from the laser pulse is distributed evenly among all the particles in the material.“

The scientists are optimistic that their work will stimulate more theoretical and experimental work along these lines. „We are just at the beginning of learning to understand the many beautiful ways in which light and matter can combine to yield fantastic effects and we do not even know what they might be today,“ says Angel Rubio. „We are working very hard with a dedicated and highly motivated group of talented young scientists at the MPSD to explore these almost unlimited possibilities so that society will benefit from our discoveries.“